Crisis Chronicles: Tulip Mania, 1633-37 The Plague and Tulip Mania
Comment of the Day

A number of factors contributed to the conditions that caused Tulip Mania. To start, the coin debasement crisis of the 1620s was followed by a period of prosperity in the 1630s. This prosperity coincided with an outbreak of the plague, which caused a labor shortage and increased real wages and surplus income. At the same time, there was a strong belief that social mobility was a Dutch birthright and that there was money to be made in every profession.

Prior to the 1630s, tulip bulbs were only physically traded among growers in the summer, when they could be safely pulled from the ground, in what evolved to be an informal spot market for individual commodities where cash and real assets traded hands. By the 1630s, the market for tulips began to grow as florists started buying and selling tulip bulbs still in the ground using promissory notes. The notes provided welcome credit and liquidity to help finance planting and limited credit risk to a known borrower with the borrower’s bulbs as collateral. However, the notes created a limited opportunity to inspect bulbs or to see them flower, provided no guarantee of quality, nor proof that the bulbs actually belonged to the seller, or even existed. Because delivery of the bulb was often months away, this financial innovation ultimately encouraged speculation as florists bought and sold promissory notes, which were in turn resold, creating a futures market. A legitimate need for financing real assets led to a financial market in which people with no stake in the actual underlying bulbs could participate. As Dash points out, it was “normal for florists to sell tulips they could not deliver, to buyers who did not have the cash to pay for them and who had no desire to plant them.” Such a financial market served the liquidity and credit needs of growers and florists, but it also led to highly leveraged speculation by those who could borrow to finance their investments with little of their own capital at stake. Promissory notes quickly transformed from a credit and liquidity mechanism to an instrument of speculation.

Beers Instead of Beurs Fuel the Market
Bulbs were traded not at the exchange buildings in Amsterdam, the beurs, but rather in local pubs where each trade was celebrated with a toast. The in het ootje method of trade required the seller to pay a commission independent of the seller’s acceptance or refusal of the bid (typically the equivalent of a round or two of drinks), which placed a premium on accepting a decent bid, further fueling the market.

The mania climaxed in January 1637, which marked the greatest influx of new florists. Many of these novices leveraged savings and mortgaged their goods or tools to take part in the bulb trade, just as we saw farmers turn to coin clipping during the Kipper und Wipperzeit. The absolute speculative peak is believed to be an auction on February 5, 1637, which raised 90,000 guilders. To put this in perspective, the wealthiest merchants of the day might’ve accumulated wealth of half a million guilders.

All true manias that see prices soar to multiples of what even the most bullish early investor thought reasonable require a number of factors.

A financial innovation unleashes the fuel necessary to support price increases. Tulip investors used futures contracts, in the 1920s trading on margin was popular and options helped revolutionise trading in the 1990s. Today bitcoin is the financial innovation, although no one is quite clear how it will used.

Easy money is also a basic requirement. The hyper inflation ahead of the Tulip mania conditioned people to think of prices as a speculative vehicle rather than a tangible good. Bitcoin was conceived during the Global Financial Crisis and has prospered beyond recognition as money printing has continued to accelerate.

A bubble always inflates when there is abundant easy money, a new financial innovation and fears about the purchasing power of currency.

We have all three now so this is certainly an inflating bubble in cryptocurrencies. It’s also important to understand that manias make big promises about the future. They go on to deliver on those promises but not in the time that investors hope. 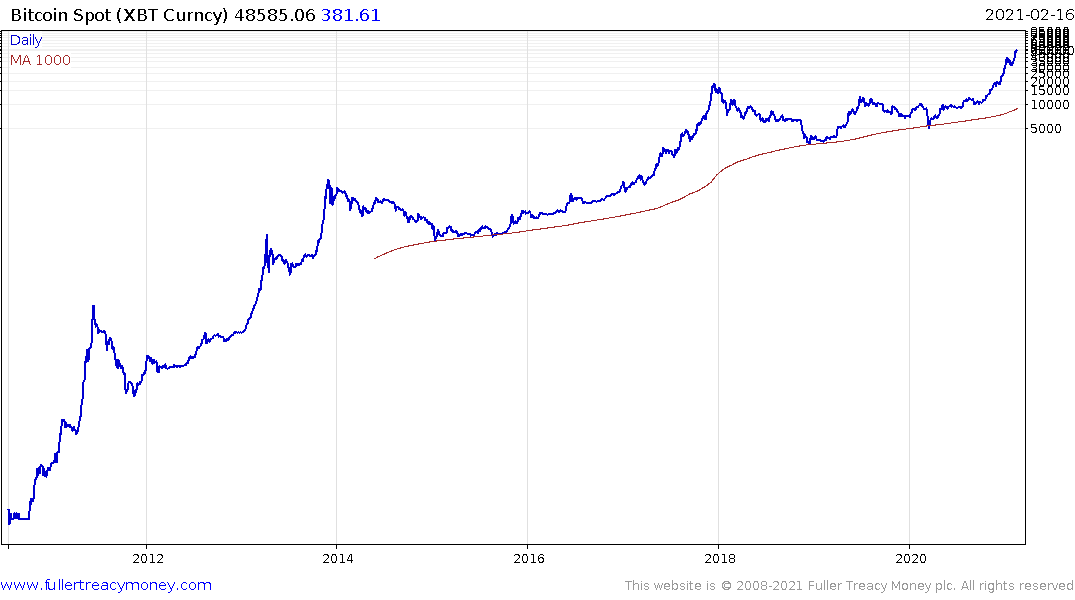 Bitcoin moves in four-year cycles. Big moves on the upside occur following the halving of the reward for mining. That last occurred in May 2020.

Following the surge, 90% drawdowns have occurred and support has been found in the region of the 1000-day MA. When bitcoin falls below the 1000-day MA for a sustained time, the bull market will be over.

As long as the bull market is in play it is likely to continue to trade in the same set of sequences as precious metals. Bitcoin moves first, Ethereum fills silver’s role as a high-beta play. Next comes demand for smaller alt-coins which is similar to demand for explorers in mining.

This kind of cross asset correlation is not set in stone but it has, so far, offered a useful way of thinking about how the trends in cryptocurrency markets would unfold.