It’s also unclear what could have triggered Sasac’s latest order on overseas positions. The regulator hasn’t ruled out further measures, including those that target specific companies under its control, the people said. A fax to Sasac seeking comment didn’t receive a reply.

The expansion of oversight suggests Beijing is now seeking to exert a measure of control over the international benchmarks that influence commodities prices in China, as well as deterring speculation more generally among state-owned companies.

Historically, exchanges have been the primary deciders of whether ebullient sentiment in futures contracts constitutes a threat to the market. Their solution is simple. They raise margin rates and make it much more expensive to hold positions. That has almost universally succeeded in bringing prices back down.

For all the talk of allowing the market a greater weight in the economy, China is instead attempting to set prices by dictate. That does not work beyond the short term. China is not a major producer of the commodities it consumes. Stockpiles are finite regardless of how large they are and they are held as a precaution against rising geopolitical tensions as well as a price setting mechanism.

This situation is a recipe for volatility and particularly since we are still in a global economic recovery. Ambitious plans for spending on renewable energy and electric vehicles will require significant retooling and demand for commodities. That’s a global phenomenon. While China is by far the largest consumer, the evolution of new sources of demand reduces its ability to influence the market. 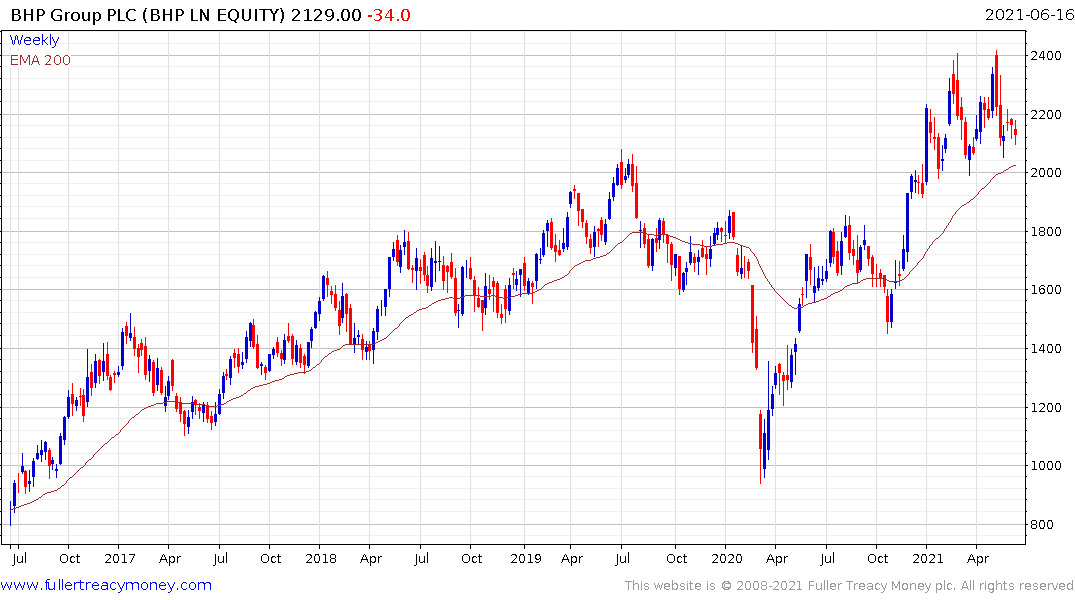 BHP is pausing in the region of the 2011 peaks and has unwound its shot-term overbought condition. 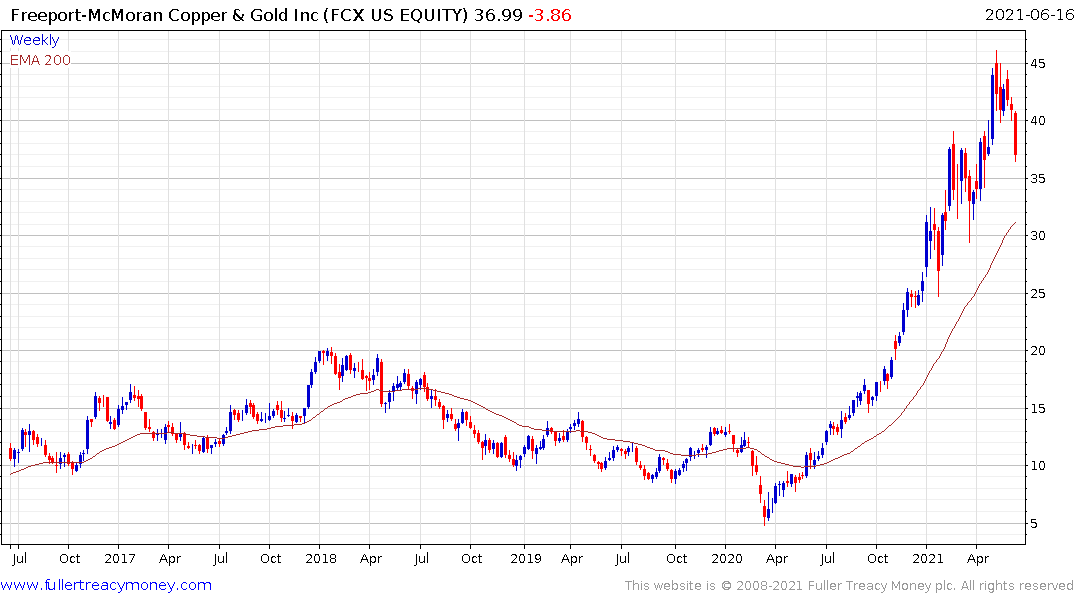 Freeport-McMoRan is a more direct play on copper. The share has been resurgent over the last year and is now testing the upper side of its underlying range. This is still a consistent uptrend if the recent low holds. 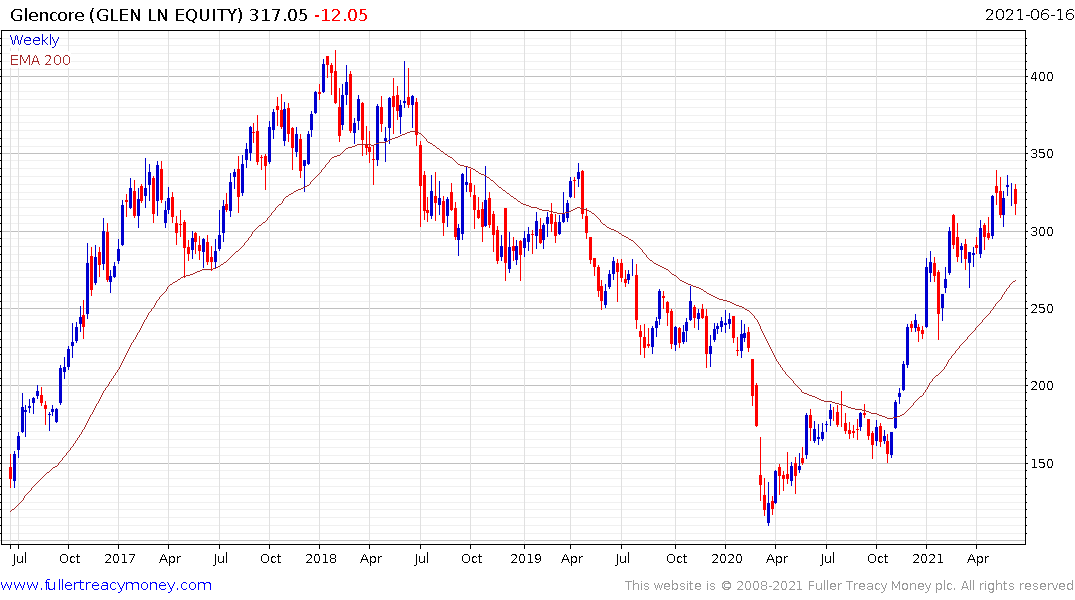 The pace of Glencore’s uptrend has moderated over the last month but it continues to hold the medium-term sequence of higher reaction lows. 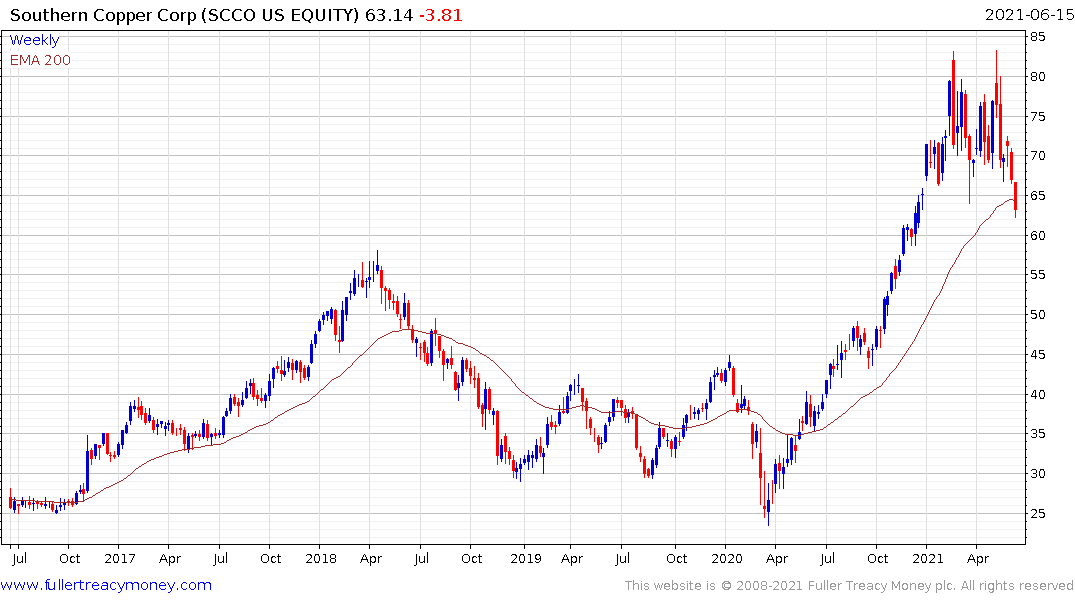 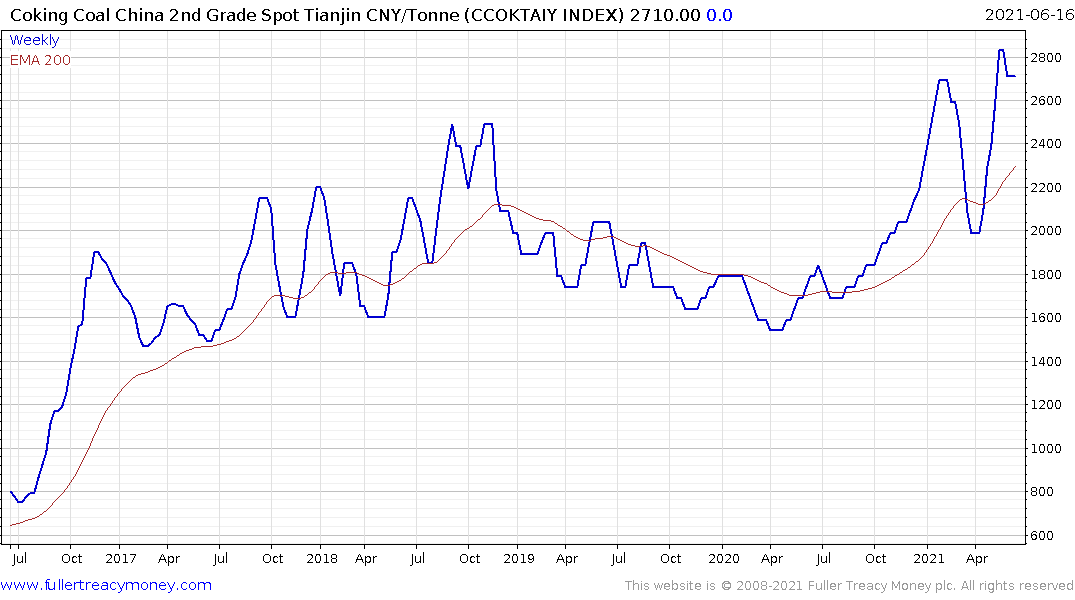 Coking coal is also an essential commodity China has to import. The Dalian futures contract remains in a clear uptrend and the coal sector is among the least loved but best performing anywhere. 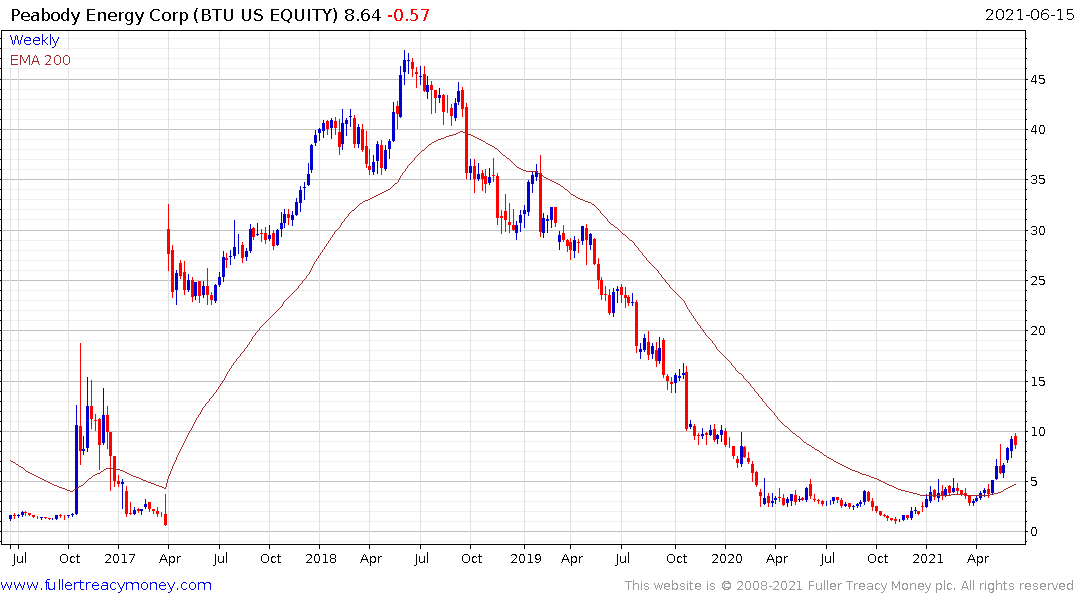 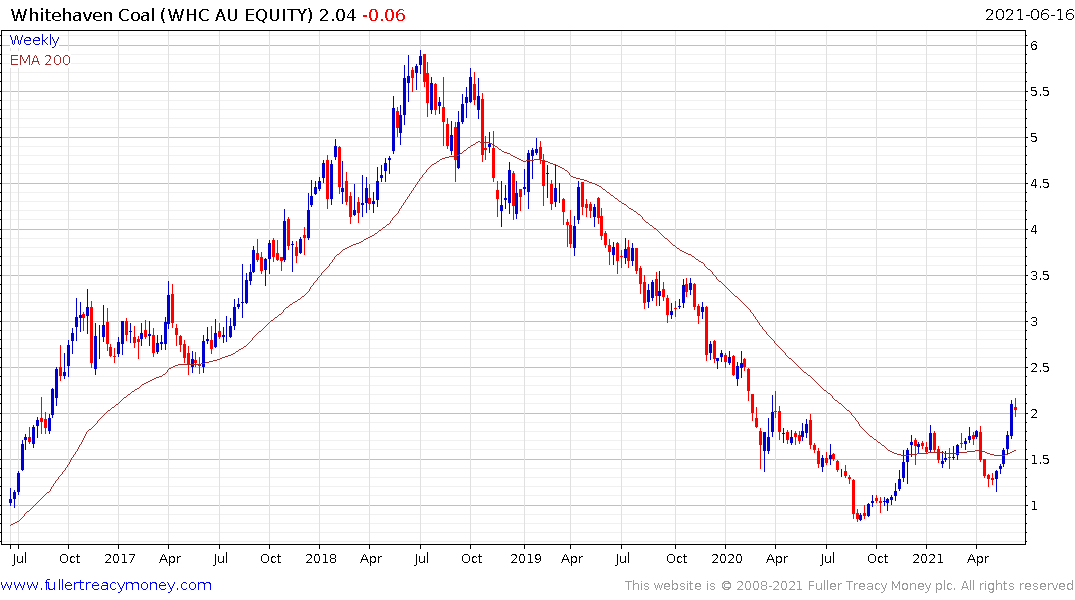 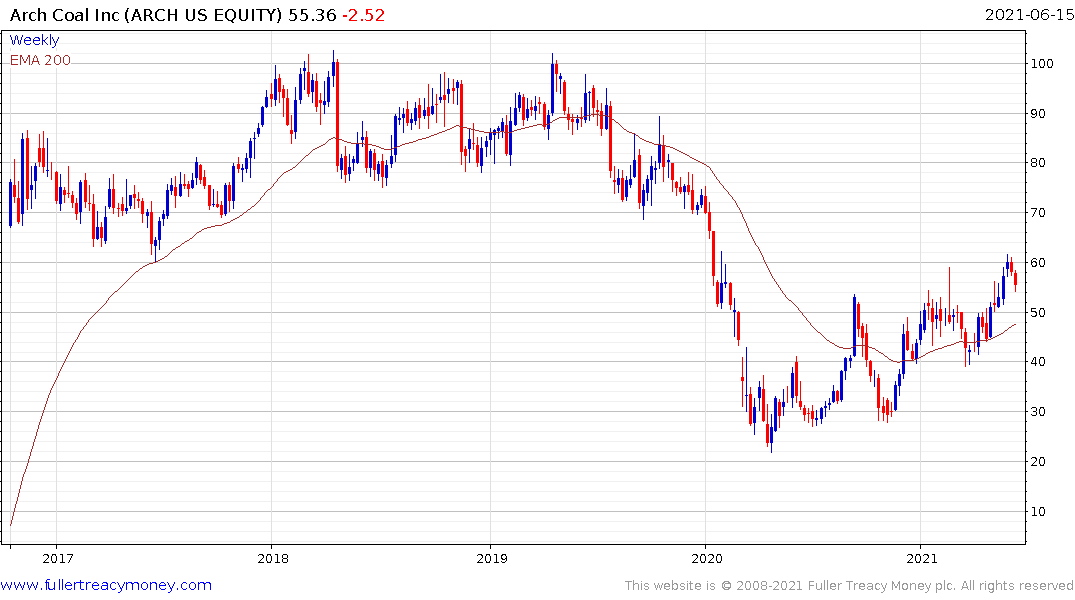 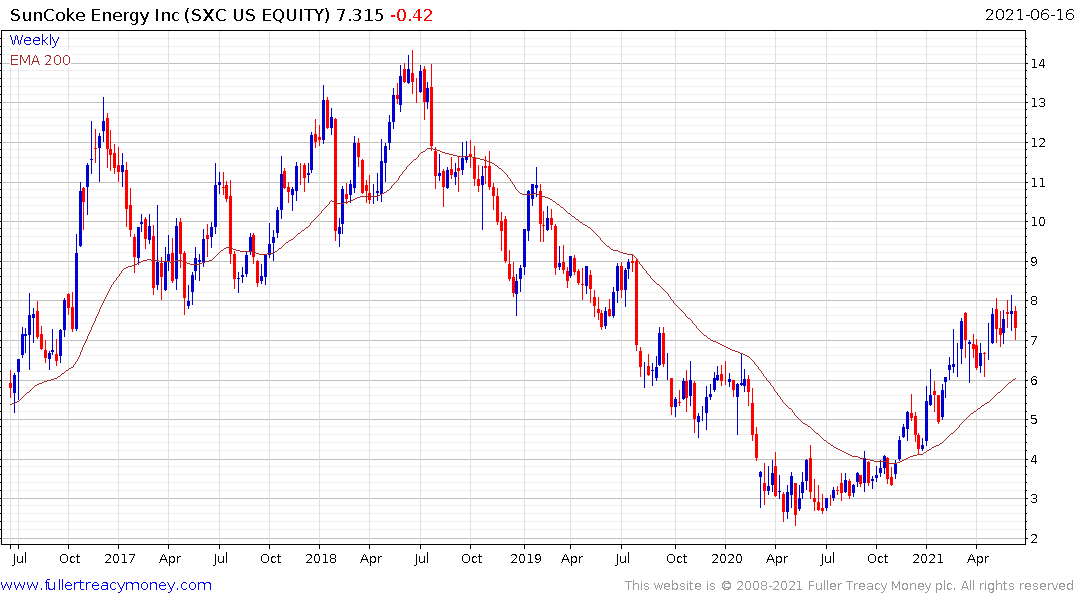 Companies like Peabody Energy, Whitehaven Coal, Arch Resources and SunCoke Energy have base formation completion characteristics but are susceptible to some additional weakness in the short term as China attempts to weigh on the sector.