Later this week, the U.S. Treasury Department is expected to release fresh rules on Chinese investment in technology companies, Bloomberg reported on Monday, putting additional pressure on China -- which hit back against the plans. Chinese investment has provided jobs and tax income for the U.S., and it should view commercial activities “objectively,” Foreign Ministry spokesman Geng Shuang told reporters in Beijing on Monday.

The U.S. is due to impose tariffs on $34 billion of Chinese imports from July 6, and Trump has threatened to impose levies on another $200 billion of Chinese goods. If that threat is realized, it could cut as much as half a percentage point off China’s economic growth, and also hit the American economy, economists have said.

Anxiety over the economic fallout is cutting deep in financial markets, with China’s yuan sliding to a six-month low Monday. The S&P 500 Index fell to the lowest since May and the Dow Jones Industrial Average sank for the ninth time in 10 sessions.

As if to reinforce concerns about the economic outlook, the Dutch Bureau for Economic Policy Analysis on Monday published its latest trade monitor, showing world trade momentum dropped in April to the lowest since 2015. The measure has fallen sharply since hitting a seven-year high at the start of 2018.

The EU’s export-oriented economies along with China have been some of the greatest beneficiaries of globalisation and therefore are also likely to be the primary defenders of the “multilateral trading” regime. Nevertheless, the rise of populism which I describe as a revolt against the status quo represents a challenge to that system which is currently being led by the Trump administration but represents a significant theme in an increasingly large number of countries. 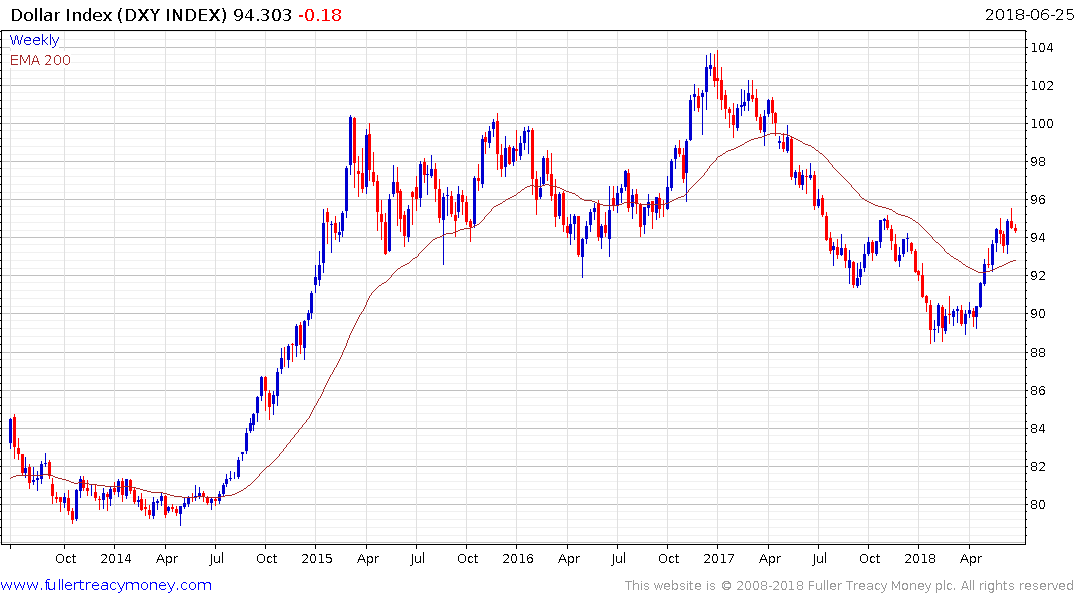 The Dollar Index is consolidating above the trend mean, but a sustained move below it would be required to question medium-term scope for continued upside. 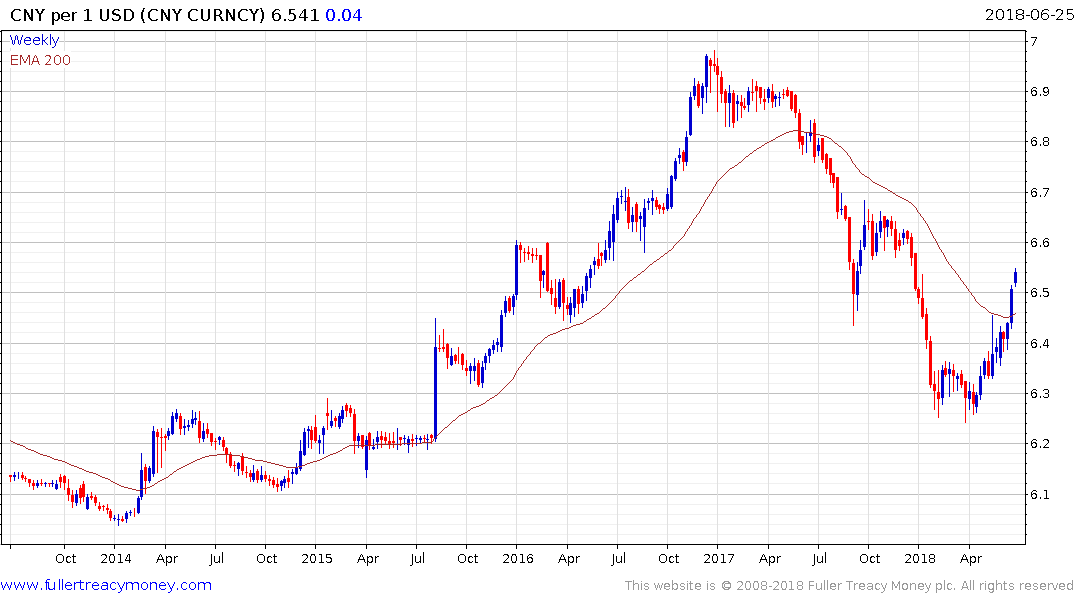 Meanwhile the Dollar continues to extend its rally against the Chinese Renminbi and a sustained move below the trend mean would be required to question the supply dominated environment. 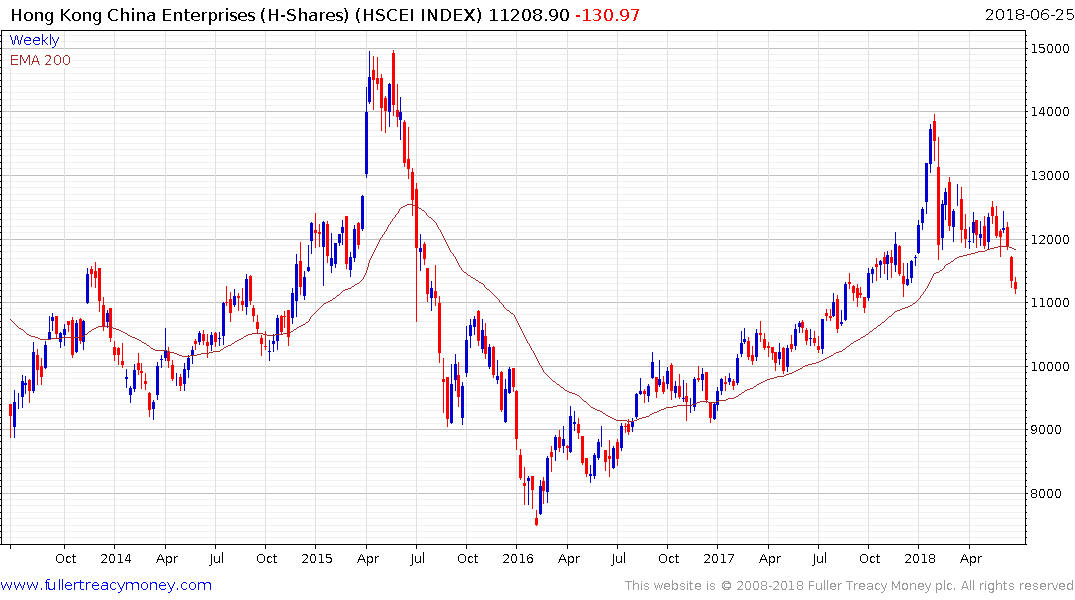 The China Enterprises Index (H-Shares) extended its decline below the trend mean today and a sustained move back above it would be required to question medium-term scope for continued downside. 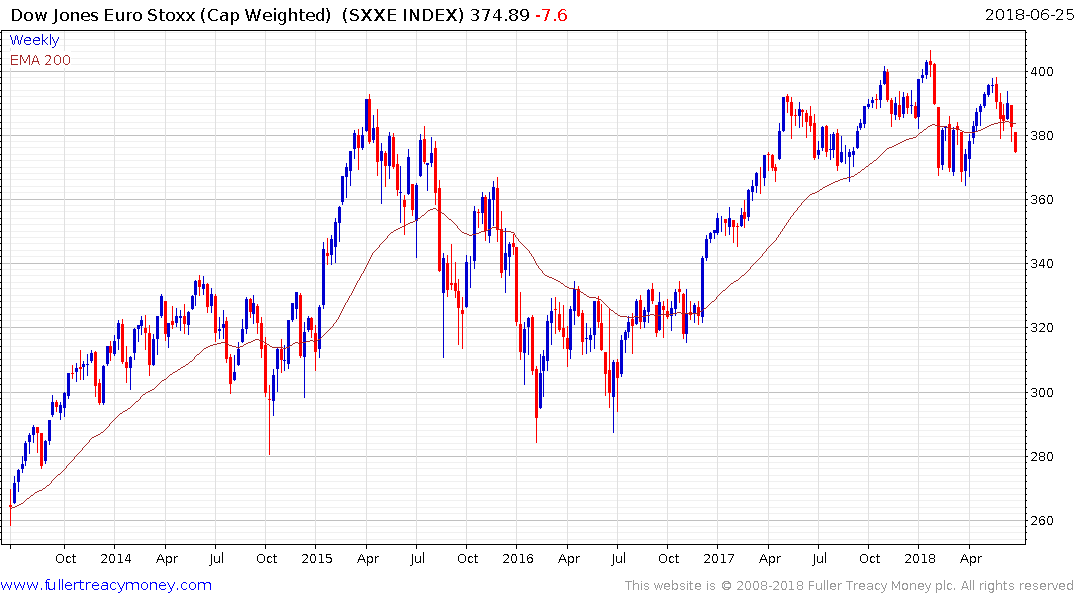 The DJ Euro STOXX Index confirmed resistance in the region of the psychological 400 level in May and a will need to bounce from the lower side of the yearlong range, near 360 if consolidation is to be given the benefit of the doubt. 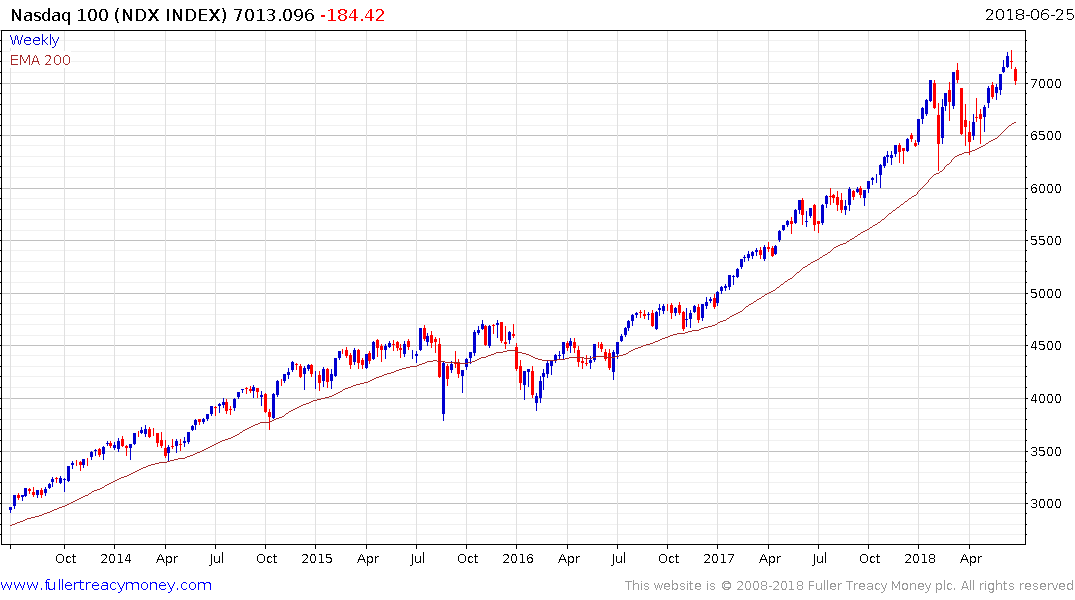 The Nasdaq-100 is back testing the 7000 level which represented the previous peak and a clear upward dynamic would be required to question the mean reversion hypothesis. 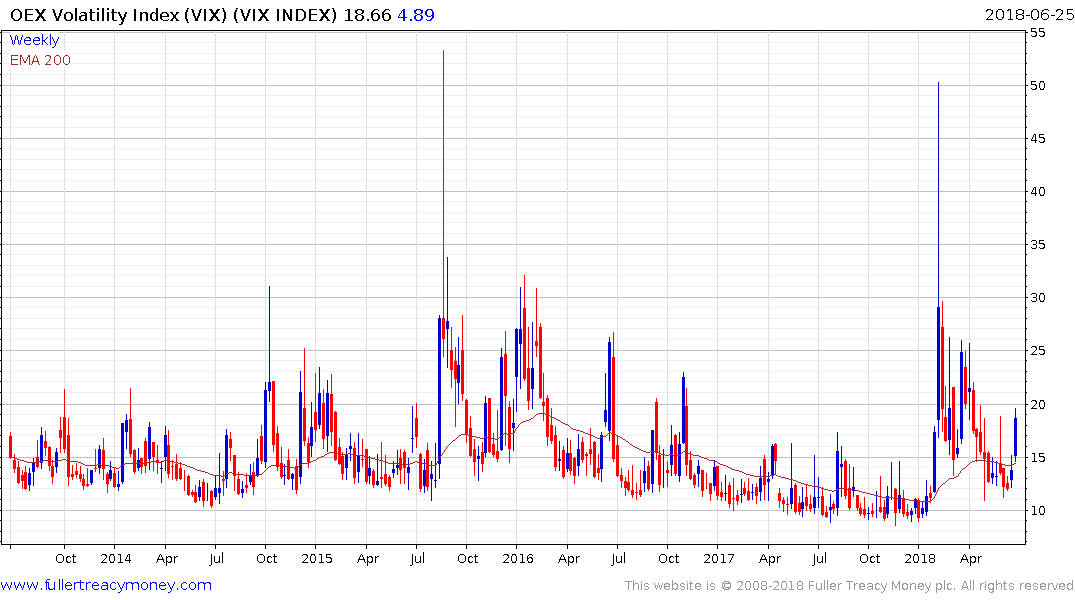 The VIX Index retraced most of its February surge but did not trade back below 10 and has bounced over the last couple of weeks from that level today. Upside follow through tomorrow would signal a heightened risk-off environment.