The tightening of central banks all around the world “wasn’t intended to cause the downturn, wasn’t intended to cause what it did,” Prince, the co-chief investment officer of Bridgewater, said in an interview with Bloomberg TV at the Swiss resort of Davos. “But I think lessons were learned from that and I think it was really a marker that we’ve probably seen the end of the boom-bust cycle.”

The realization of how sensitive the financial markets now are to interest rates during the freezing up of the high yield market in December 2018 and the repo market in September 2019 is leading to a range of conclusions among policy makers and investors.

The first is convexity (the sensitivity of price to interest rate moves). The traditional argument runs that convexity is particularly important for long-dated bonds, equities and real estate. What we have seen instead is the sensitivity of highly leveraged markets to liquidity.  That convex effect is less well understood than the traditional measure in the bond markets.

We know what happens to asset prices in a liquidity rich environment, such as we are presented with right now. The uncomfortable truth is we also know what happens when liquidity falls. The credit crisis was one such example and the demise of India’s non-bank lenders is another.

Central banks are now demonstrating awareness of the risk withdrawal of liquidity represents and the aggregate of central bank balance sheets has increased by $750 billion since early October. Since central banks generally cut by 400 basis points to tackle a recession, they have little runway to act and therefore the provision of liquidity is viewed as a preferable measure now, to forestall the need to act later. This is a major change. Central banks are now anticipating recessions rather than reacting to them.

One of David’s favourite adages was “Bull markets don’t die of old age; they are assassinated by central banks” Right now central banks are doing everything they can to avoid a contraction.

The conclusion investors are tempted to draw is the boom/bust cycle has been conquered. Instead, the mid-cycle slowdown Jay Powell spoke about is becoming more relevant. The Fed has just bought an additional leg higher in asset prices. To think that has changed the long-term interplay between the bulls and bears sounds hubristic.

The normal pattern of events is the 4th year of the US Presidential Cycle is the best in terms of performance. The 1st year is usually the worst as the Augean stables get cleaned out. 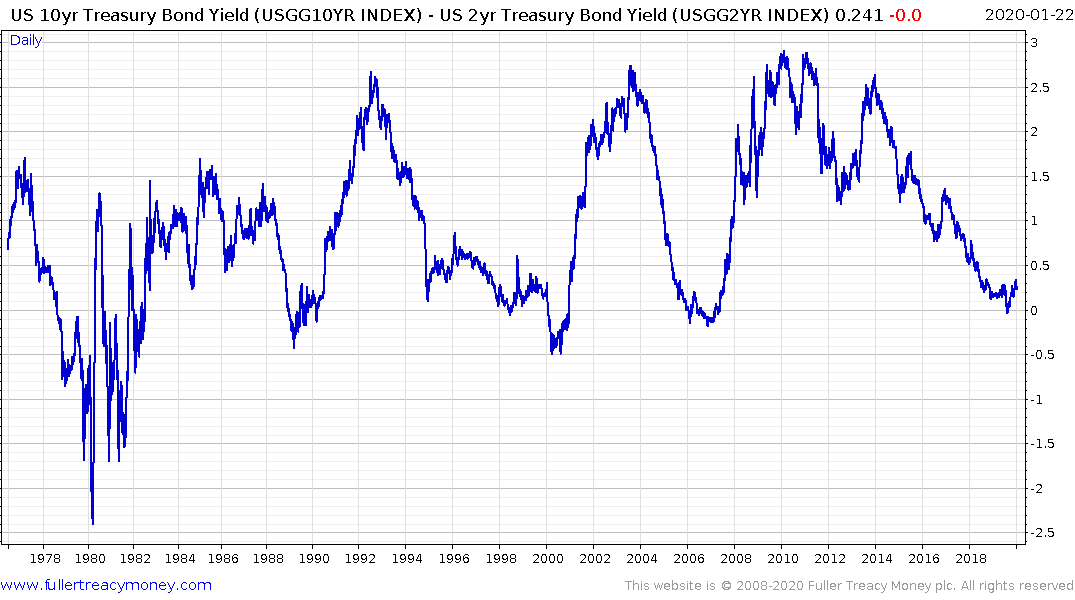 Additionally, the yield curve inverted in August. One of the hallmarks of the yield curve signal is markets generally rally impressively after the signal which leads to investors forgetting about it. In 1998, the market rallied by about 50% and in 2006 by about 30% before the eventual peak. Since the initial inversion in August the S&P500 is up 15.68%. 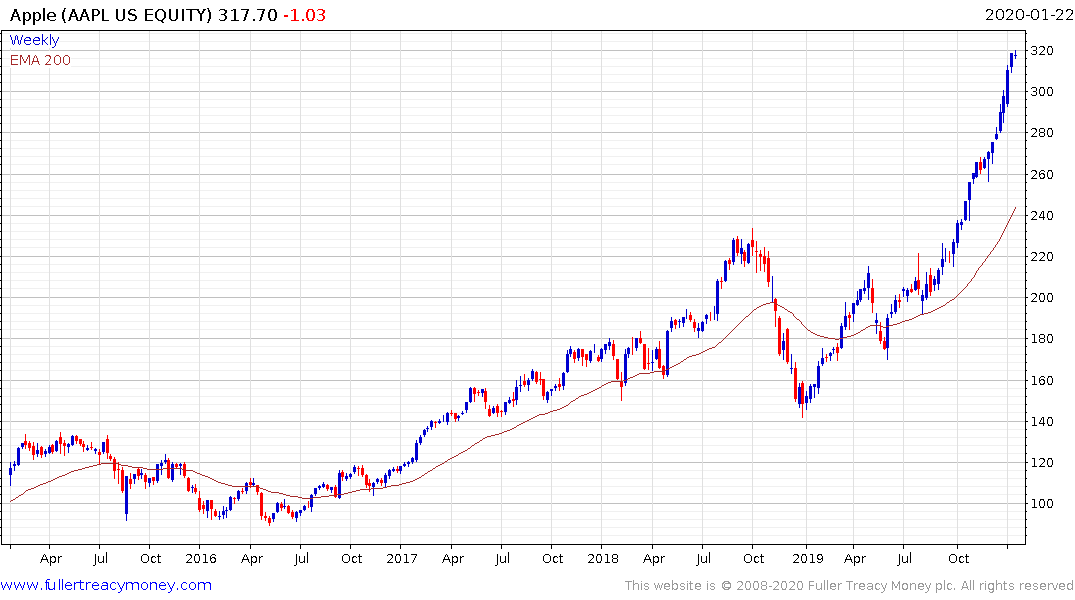 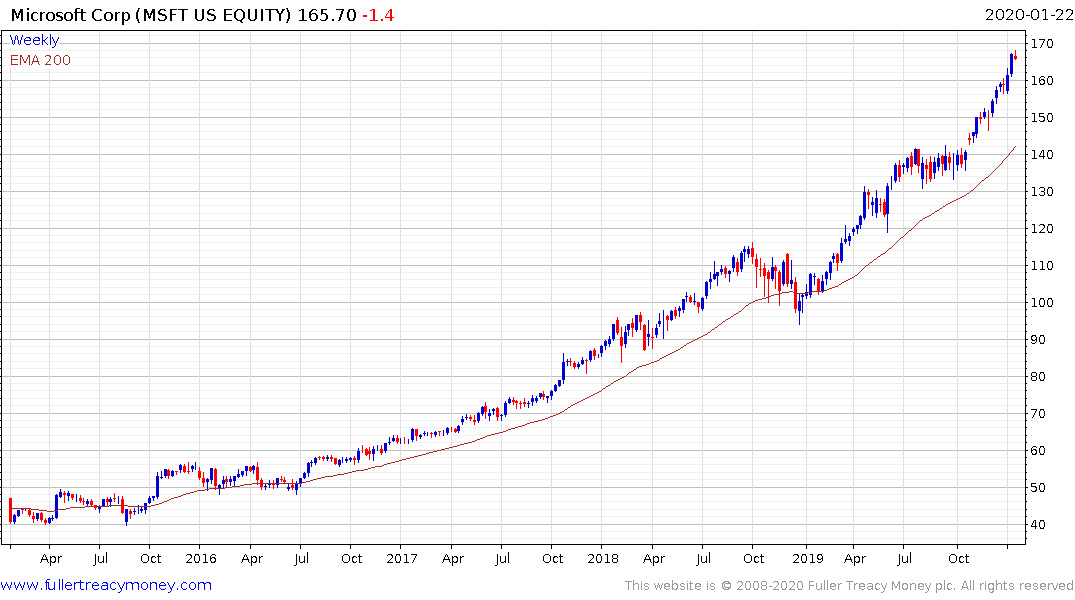 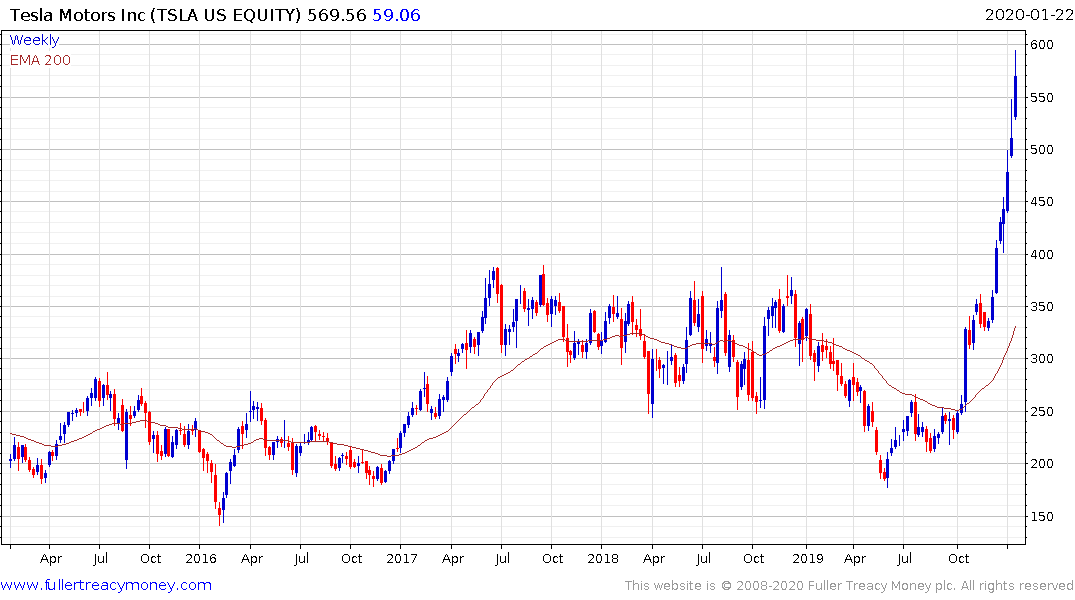 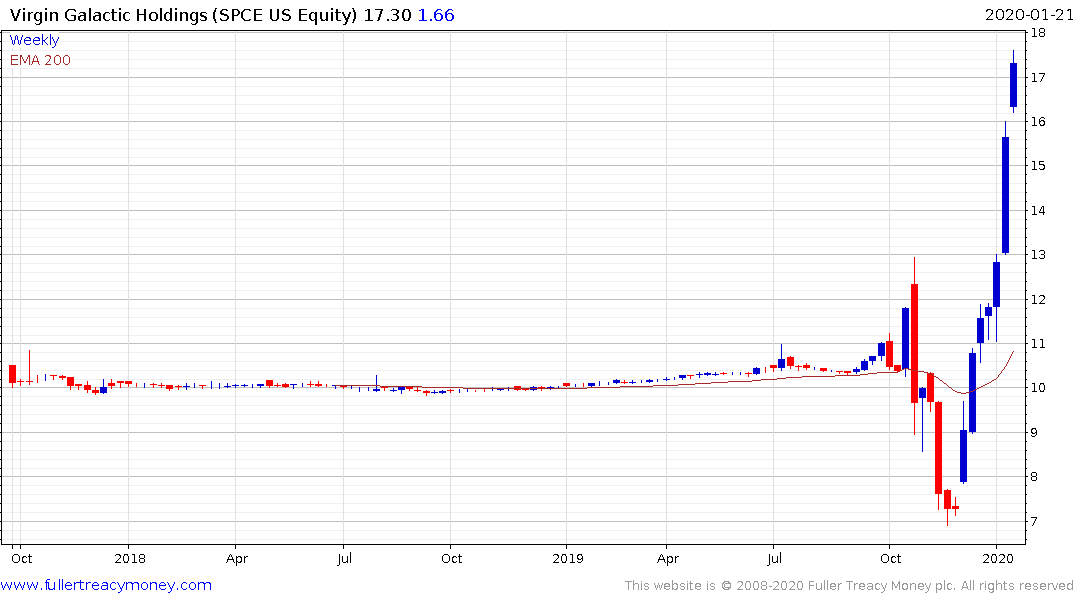 The accelerations we are seeing today in companies Apple, Microsoft, Tesla and Virgin Galactic and the wide overextensions on a host of other shares highlight the aggressive phase of an evolving mania is clearly underway. Breaks in sequences of higher reaction lows will be required to question the consistency of these advances.

I created this spreadsheet of all US listed companies with a market cap of more than $5 billion. 80% of the 941 shares are trading above their respective trend means. Tesla is the most overextended at 110% of its 200-day MA.