Brazil’s central bank will extend its currency intervention program as the government tries to support the real in an effort to fight above-target inflation.

The central bank has been selling swap contracts since August to provide currency hedge to investors in an effort that has helped the real gain more than any other major currency in the past six months. The program was scheduled to end June 30.

Details of extension will be provided in due time, the central bank said in a statement on its website yesterday.

A weaker real could further stoke inflation that the central bank says has a 40 percent chance of accelerating beyond the 6.5 percent upper limit of the target range this year. The central bank last week halted the world’s longest tightening cycle as President Dilma Rousseff’s administration struggles to tame consumer prices without further jeopardizing growth.

“In the short term, the overriding concern is inflation, which is already a major economic problem and an increasing political liability,” Alberto Ramos, chief Latin America economist at Goldman Sachs Group Inc., said by phone. “Their preference is having the exchange rate below 2.30 to 2.35 until the elections.”

The eyes of the world are turning towards Brazil, with the World Cup due to start this week. Meanwhile, striking subway workers in Sao Paolo highlight the impatience of people waiting for public services to catch up with expectations of a better standard of living. The central bank needs to demonstrate that it can control inflation and hopefully, the upcoming election will result in an administration prepared to deal with the bottlenecks which are constricting Brazilian growth potential. 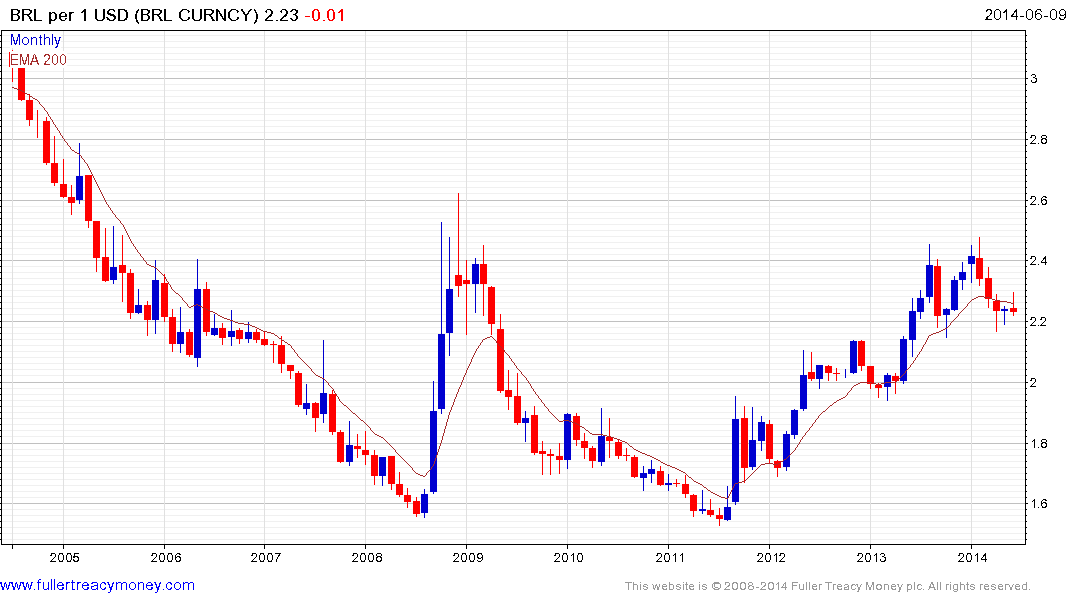 The US Dollar found support against the Real bear BRL1.5 in 2008 and again in 2011 and the Bank of Brazil is currently defending the BRL2.4 area. The Dollar failed to hold a move back above the 200-day MA late last week and a sustained move above BRL2.3 would be required to question potential for some lower to lateral ranging. 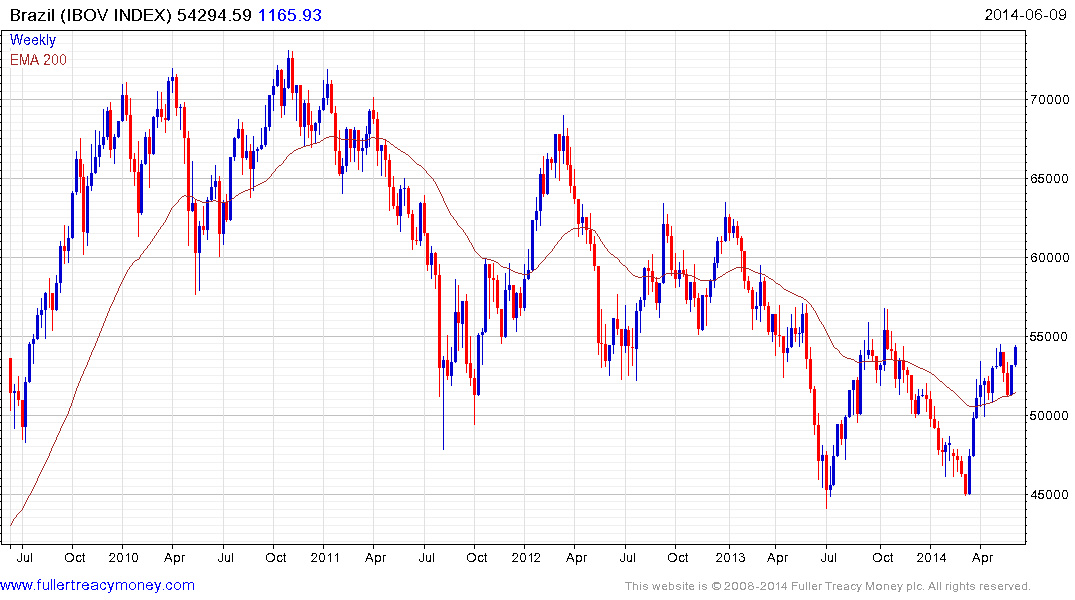 The Bovespa Index has been weighed down by Petrobras’ repeatedly seeking fresh capital, the bankruptcy of OGX and the impact lower global growth has had on VALE. The Index found support last week in the region of the 200-day MA and a sustained move below 51500 would be required to question current scope for additional upside. 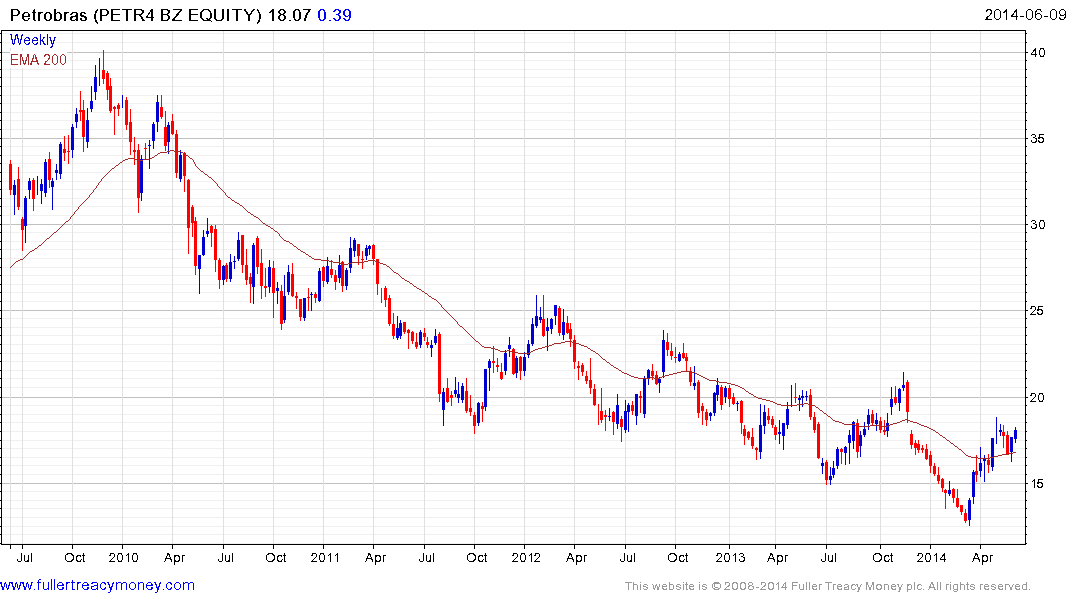 While Petrobras has also found support in the region of the 200-day MA and a sustained move below BRL16.50 would be needed to reassert the medium-term downtrend. 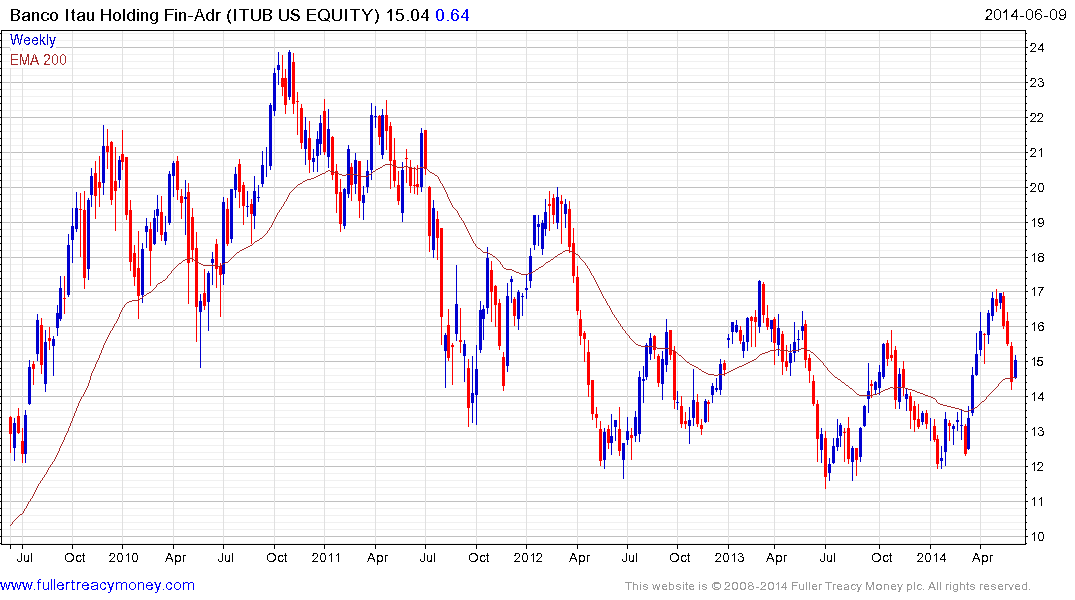 Banco Itau’s ADR is testing the upper side of a two-year base and a sustained move below the trend mean would be required to question medium-term recovery potential. 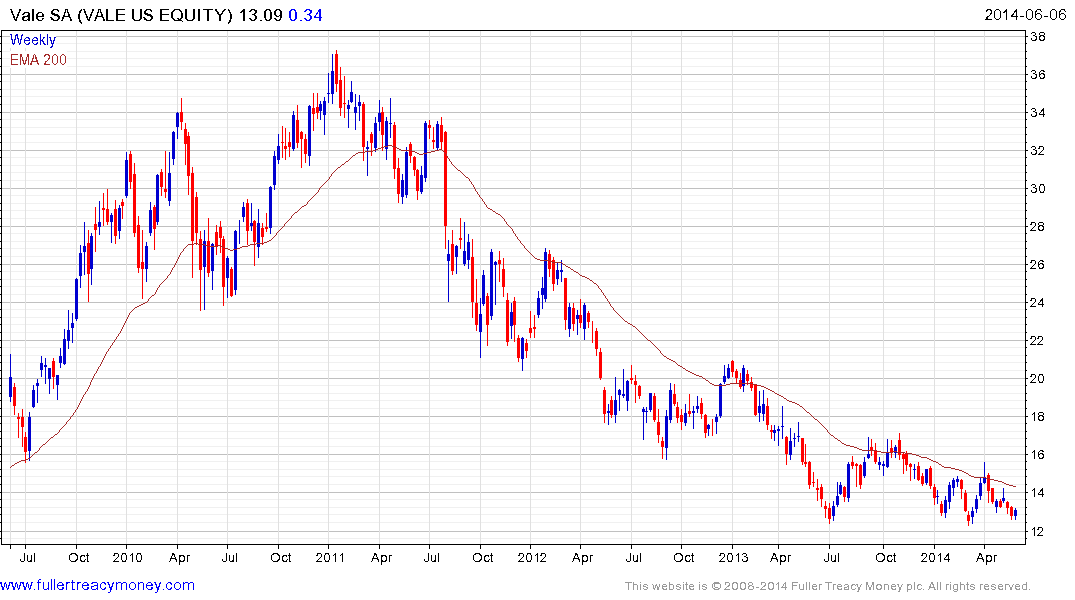 VALE has found at least short-term support in the region of the lower side of its range.