So-called linkers due June 2023 lost 1.8 percent this month, data compiled by Bloomberg show. Notes maturing in 2021 indicate inflation of 1.56 percent over their lifetime, less than the Bank of Korea’s target of 2.5 percent to 3.5 percent through 2015. Governor Lee Ju Yeol lowered the benchmark rate to 2.25 percent from 2.5 percent on Aug. 14 and said price pressures are “not high.”

The first reduction in borrowing costs since May 2013 came after the BOK lowered its living cost estimates and Finance Minister Choi Kyung Hwan unveiled an 11.7 trillion won ($11.5 billion) spending plan to boost the slowest growth in more than a year. While most analysts predict Lee will keep interest rates unchanged, Samsung Asset Management Co. and Eastspring Asset Management Co. see room for a further cut.

“Another rate cut within the year is possible as one isn’t enough to support the government’s growth push,” Jack Kim, who helps manage 700 billion won of fixed-income assets for Eastspring in Seoul, including Korean linkers, said in an Aug.26 phone interview. “Low inflation should make it feasible.”

Falling interest rates, low inflation, a government flush with cash and keen to promote growth results in South Korea being an interesting prospect right now. The strength of the Won throughout the last year, especially during a time when currency market volatility has been an issue for a number of neighbouring countries is an additional positive consideration from the perspective of foreign investors. 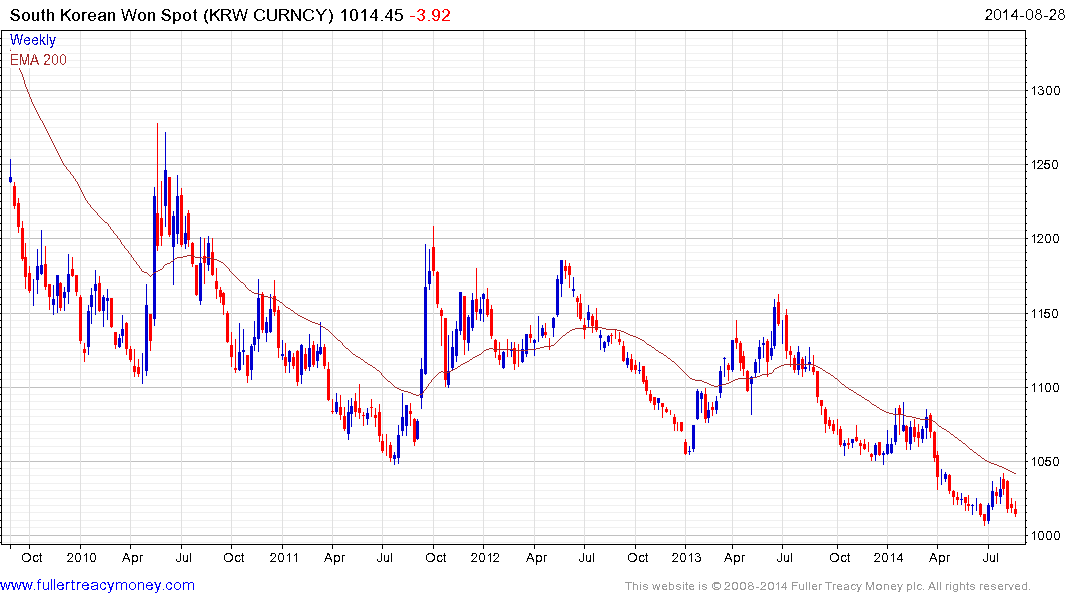 South Korea’s stable of highly successful world class companies is a logical place to start one’s investigation of the domestic stock market but neither the major electronics companies, at 22% of the Index, nor the Korean automakers are responsible for the recent return to outperformance of the Kospi. 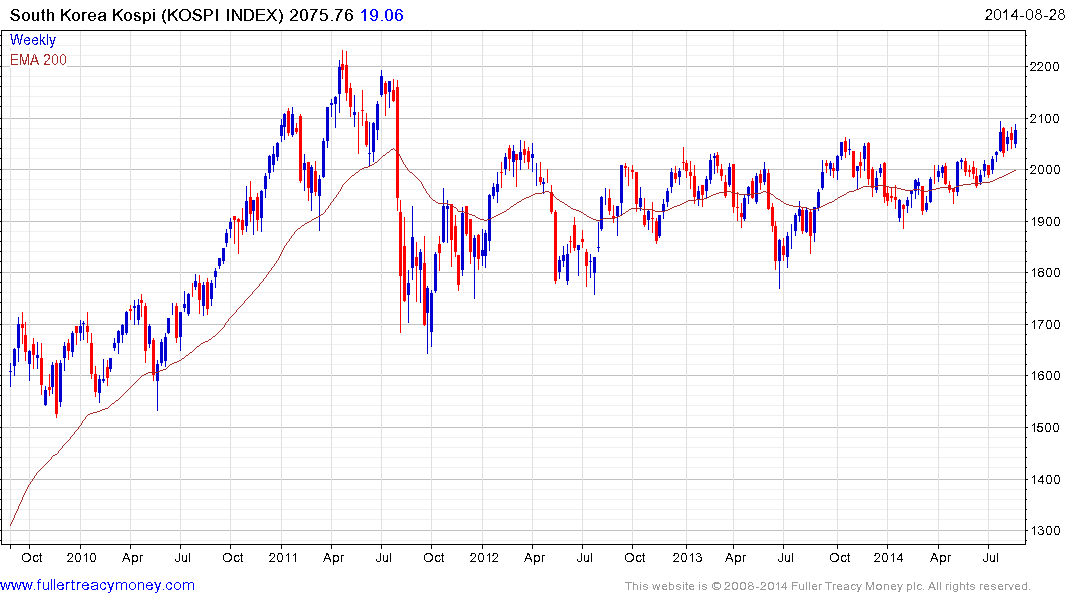 The Non Metal Basic Materials Index which is dominated by cement companies has been by far the best performer this year. For example Asia Cement continues to hold a progression of higher reaction lows and found support this week in the region of the 200-day MA. 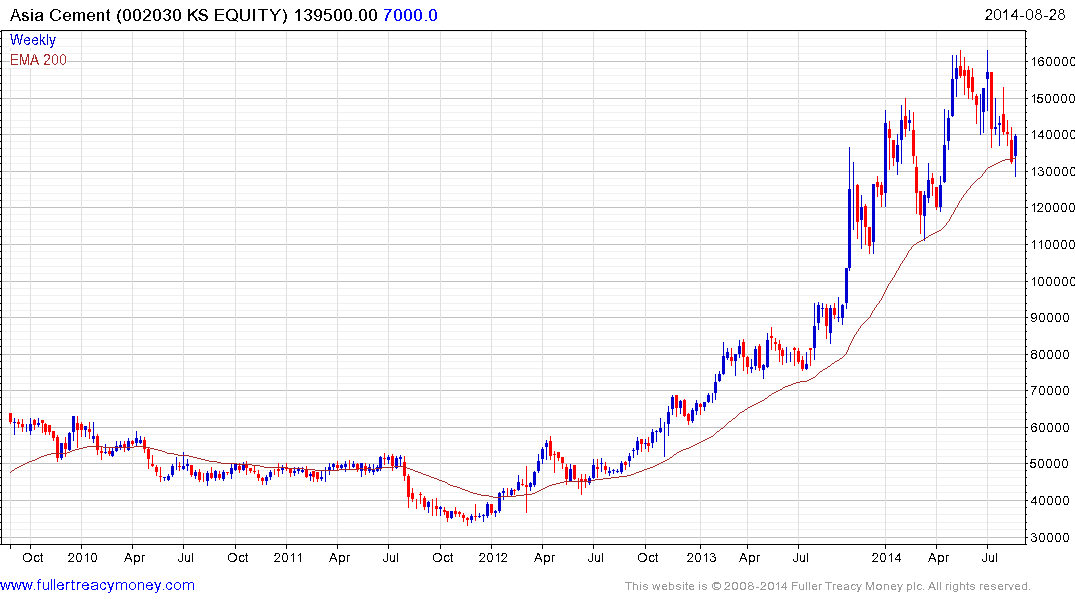 The Transport & Storage Index, which is dominated by shipping and logistics companies, rallied from July to break out of a more than yearlong base and currently looks susceptible to some consolidation of that gain. 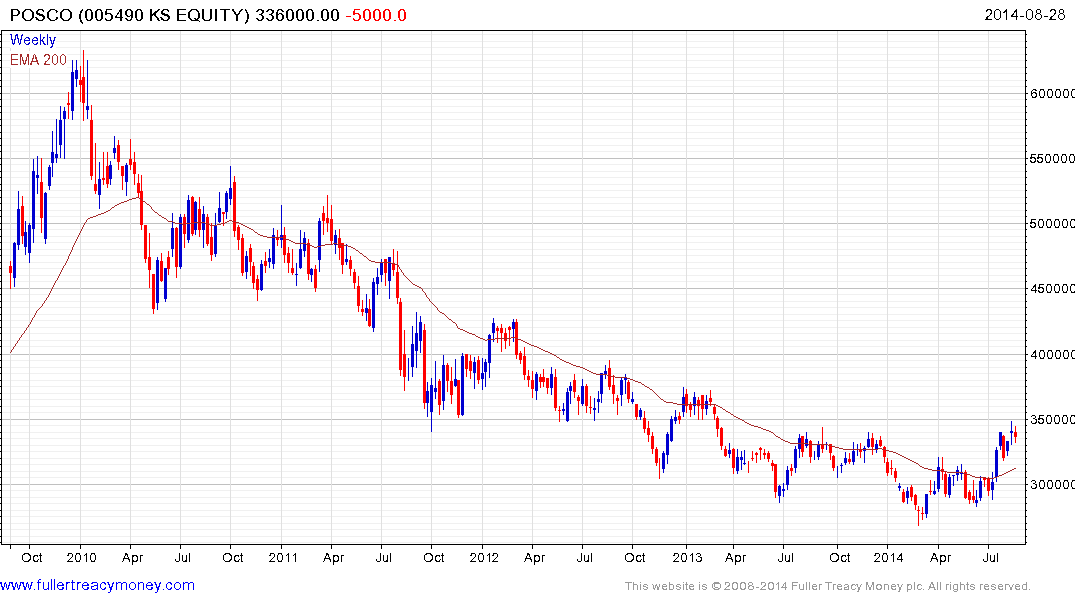 Posco has rallied over the last month to break a more than four-year progression of lower rally highs and a sustained move below the 200-day MA would be required to question medium-term recovery potential. The company also has an ADR with the ticker PKX. 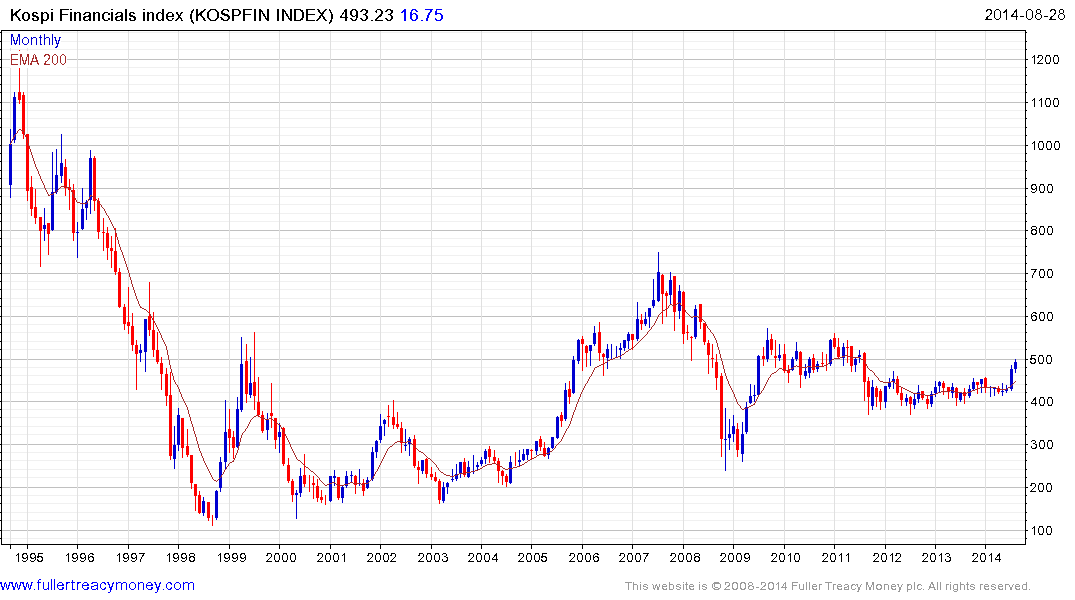 The Korean Financial Index represents a healthy 14% of the Index and is leading the wider market higher. It completed a three-year base in July and a sustained move below 450 would be required to question recovery potential.

Among the Korea focused funds in the Chart Library. 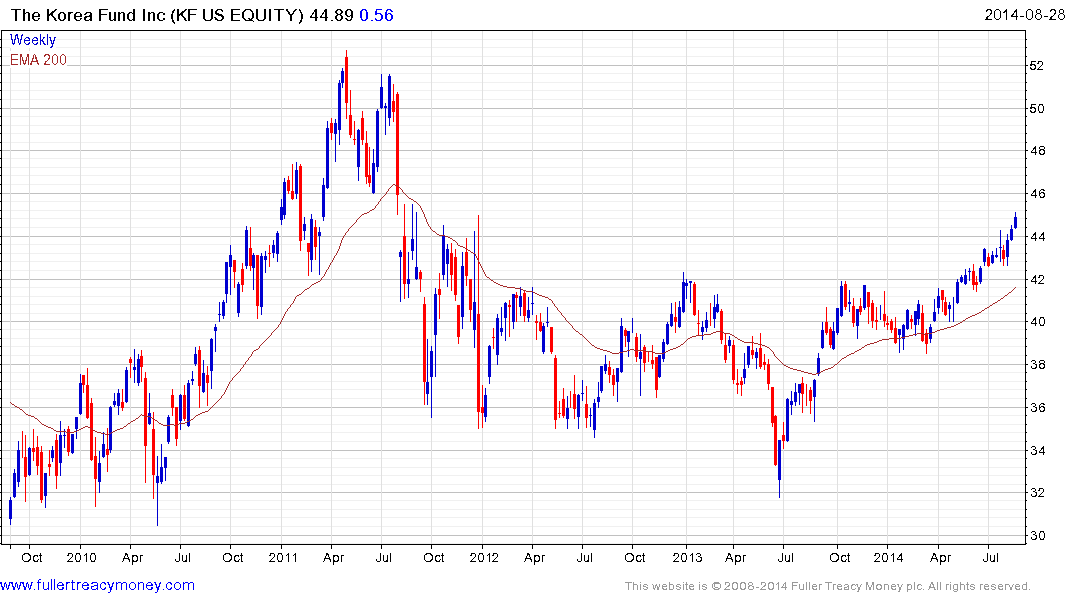 The US listed Korea Fund Inc. is trading at a discount to NAV of 9.22% and broke out of a thirty-month range in the last two weeks. 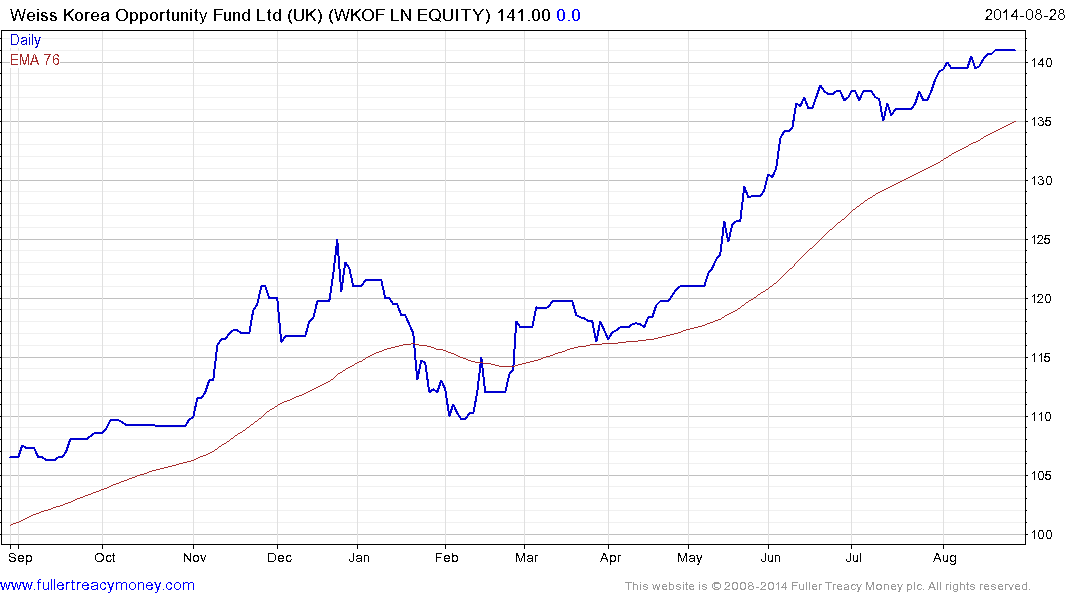 The UK listed Weiss Korea Opportunity Fund trades at a discount to NAV of 5.4% and continues to hold a progression of higher reaction lows.