Stanley Druckenmiller's Duquesne Capital bought Chinese consumer and tech stocks in the second quarter, according to a filing Monday.

The billionaire's hedge fund took a stake in Chinese e-commerce giant Alibaba of 710,000 shares, according to a required 13-F filing with the Securities and Exchange Commission Monday. The hedge fund also took a 597,000-share stake in Yum China.

The firm increased its stake in Alibaba rival JD.com by 721,000 shares to 1.36 million shares, and added 500,000 shares of Chinese travel services company Ctrip for a 1.41 million share stake, the filing showed.

The lack of a vibrant domestic consumer economy left China heavily exposed to trouble outside its borders, particularly during the global financial crisis. That experience strengthened the resolve of the administration to evolve that particular part of the economy. Following my trip to southern China earlier this month I can attest to the fact they have succeeded.

The impetus to evolve the consumer and services economy is also imperative if the country is to achieve its long-term development goals. China has gotten the most possible benefit from the infrastructure and export business model it can. If it is to continue to propel the trajectory of development then developing human capital needs to be a key pillar of policy. The consumer economy is a big part of that. 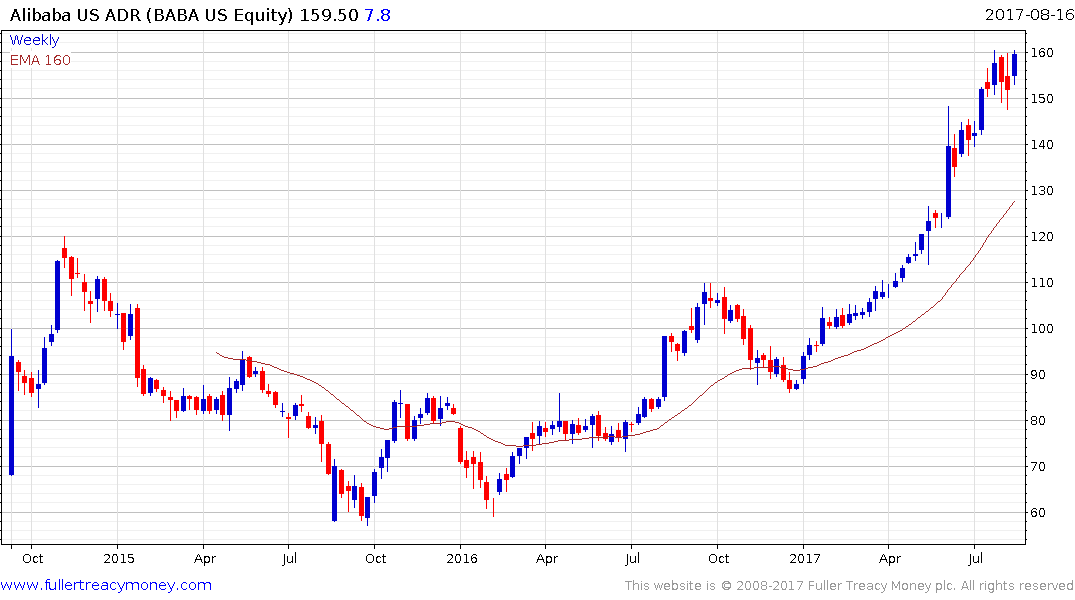 Alibaba continues to march higher, as it holds a progression of higher reaction lows. It is increasingly overextended relative to the trend mean, but a break in that sequence, with a sustained move below $150, would be required to signal a return to supply dominance beyond a pause. 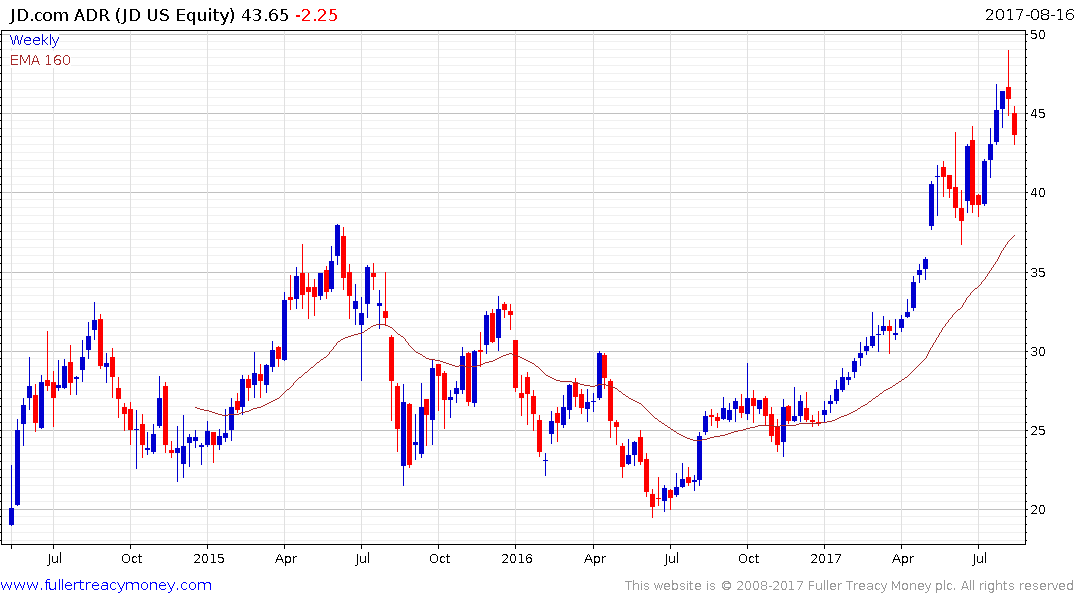 JD.com margins are not as impressive as Alibaba’s following this week’s earnings releases and the share appears to now be in a process of mean reversion. 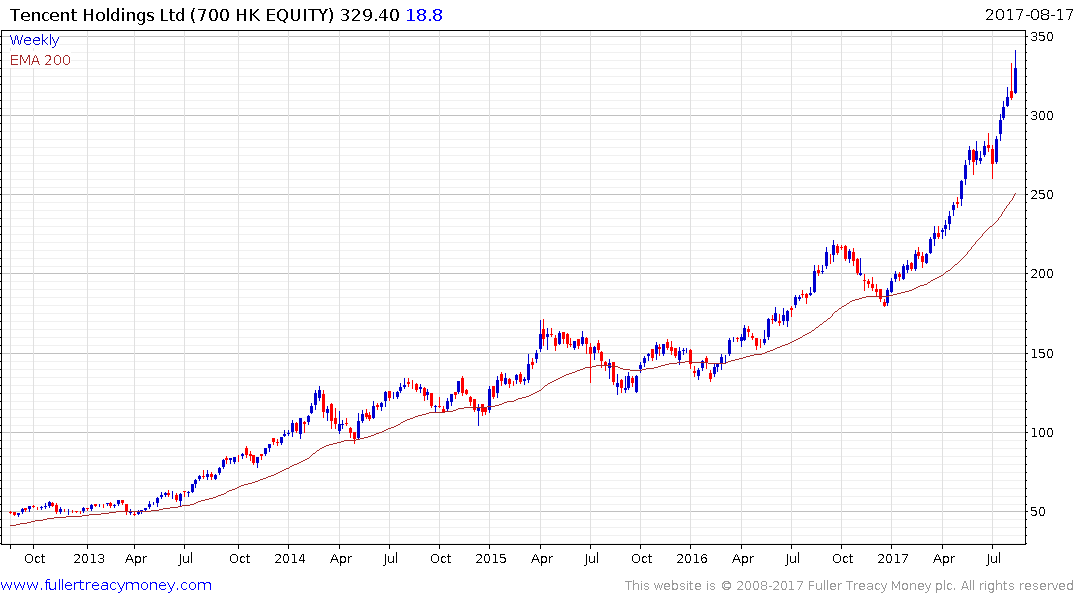 Tencent reported impressive earnings after the close yesterday. It opened at a new high this morning but did not hold the move. Since January the share has had two ranges of approximately HK$30. A reaction of more than that would be required to check momentum. 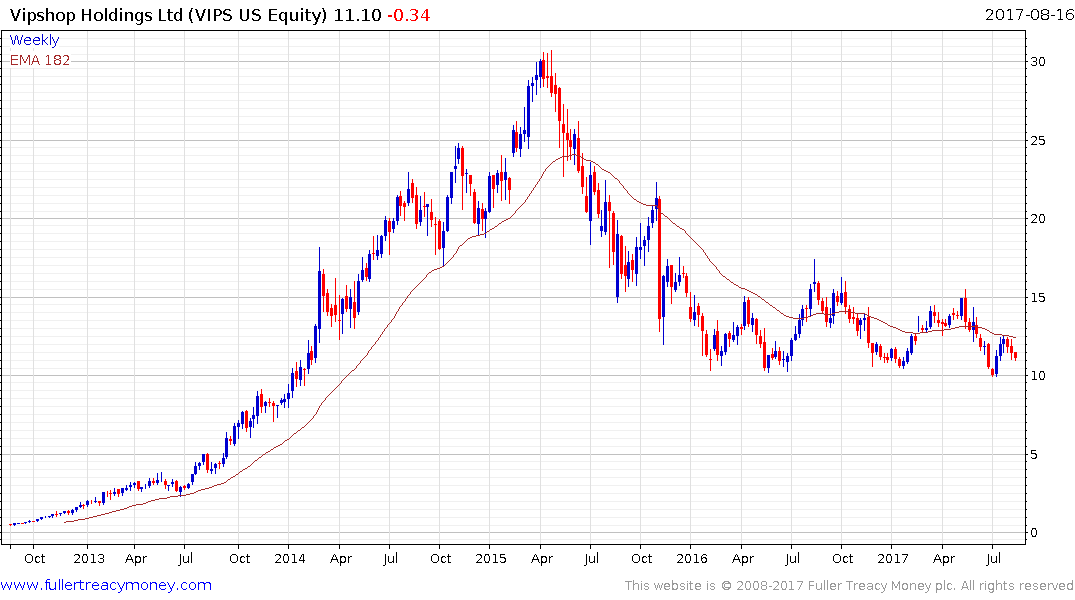 VIPShop is at the other end of the scale and is now testing the lower side of a yearlong range. It is in need of a clear upward dynamic to signal a return to demand dominance. 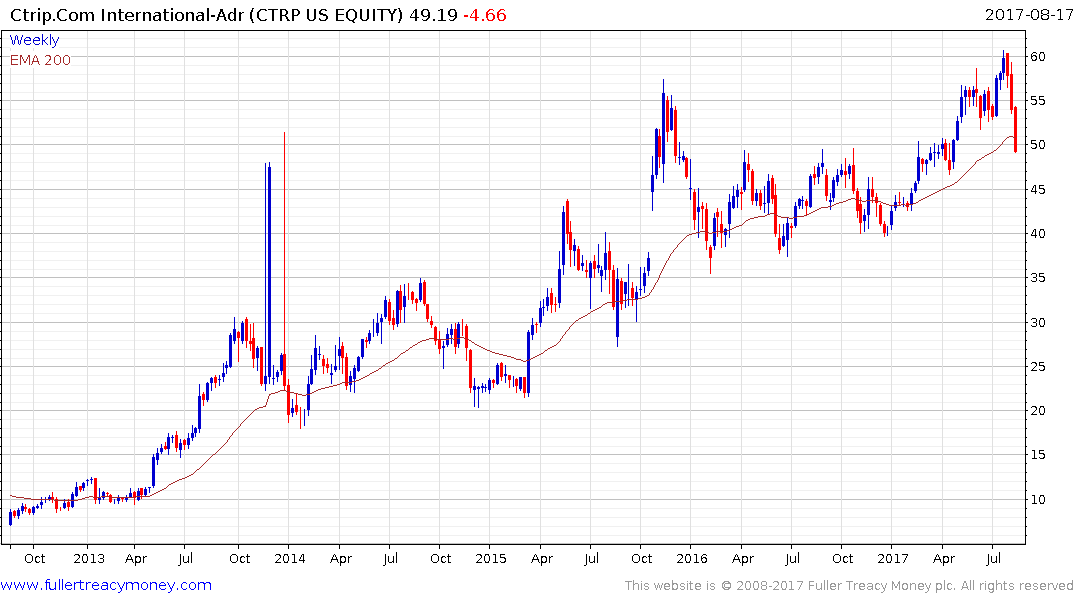 Ctrip has pulled back sharply over the last three weeks. It is now testing the region of the trend mean and the medium-term progression of higher reaction lows. If the benefit of the doubt is to be given the potential for continued upside it will need to demonstrate a return to demand dominance soon.