Big data: The nex frontier for innovation, competition, and productivity
Comment of the Day

Big data: The nex frontier for innovation, competition, and productivity by Eoin Treacy

Health care is a large and important segment of the US economy that faces tremendous productivity challenges. It has multiple and varied stakeholders, including the pharmaceutical and medical products industries, providers, payors, and patients. Each of these has different interests and business incentives while still being closely intertwined. Each generates pools of data, but they have typically remained unconnected from each other. A significant portion of clinical data is not yet digitized. There is a substantial opportunity to create value if these pools of data can be digitized, combined, and used effectively. However, the incentives to leverage big data in this sector are often out of alignment, offering an instructive case on the sector-wide interventions that can be necessary to capture value.

The public sector is another large part of the global economy facing tremendous pressure to improve its productivity. Governments have access to large pools of digital data but, in general, have hardly begun to take advantage of the powerful ways in which they could use this information to improve performance and transparency. We chose to study the administrative parts of government. This is a domain where there is a great deal of data, which gives us the opportunity to draw analogies with processes in other knowledge worker industries such as claims processing in insurance.

?In contrast to the first two domains, retail is a sector in which some players have been using big data for some time for segmenting customers and managing supply chains. Nevertheless, there is still tremendous upside potential across the industry for individual players to expand and improve their use of big data, particularly given the increasing ease with which they can collect information on their consumers, suppliers, and inventories.

At the Global Strategy Session last week a discussion evolved about the disruptive impact the third industrial revolution would have on employment trends. People are understandably worried about the pace of mechanisation and how quickly humans are being replaced by robots.

One delegate highlighted how 4000 people had previously been employed in Bolton by BAE Systems whereas now the workforce is a fraction of that number and there is little hope of these employees ever finding work in the area again.

Another delegate highlighted the fact that there are more than 4 million jobs open in the big data sector, between the USA and Europe, but that there is a shortage of people with the requisite skills to fill them.

Clearly the message is that the technical skills needed to thrive in the modern economy have changed beyond recognition in the life span of many workers. As we live longer, the challenge will be to find jobs we can be happy in and which encourage us toward continuous learning. Anyone who fails to embrace this reality will be more likely to have to depend on a state ill prepared for mass unemployment.

IBM (Est P/E 10.8, DY 1.83%) is an icon of big data and its Watson artificial intelligence is increasingly being pointed at the healthcare sector. The share has been supported by attractive valuations and rallied over the last couple of weeks to break a progression of lower rally highs and push back above the 200-day MA. It will need to continue to hold above the lows for the year for medium-term upside potential to be given the benefit of the doubt. 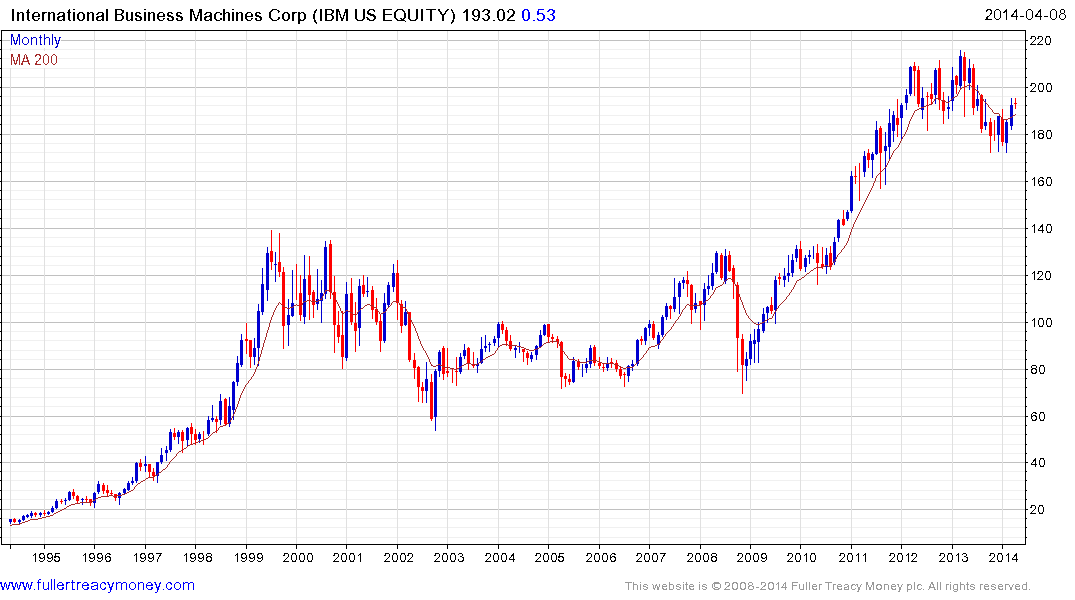 Oracle (Est P/E 13.8, DY 1.2%) broke out of an almost two-year range in December and a sustained move below the 200-day MA would be required to question medium-term scope for additional upside. 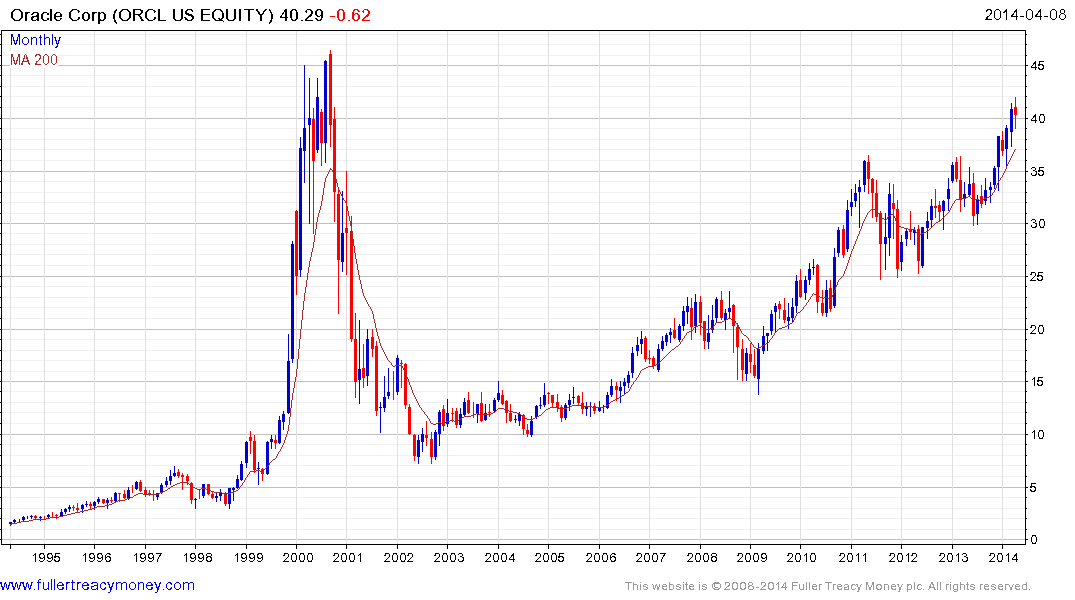 CA Inc (Est P/E 10.15, DY 3.19%) broke out of a decade-long base late last year and has returned to test the region of the upper side and the 200-day MA over the last couple of months. Provided it continues to hold in the $30 area, the benefit of the doubt can continue to be given to medium-term potential for additional upside. 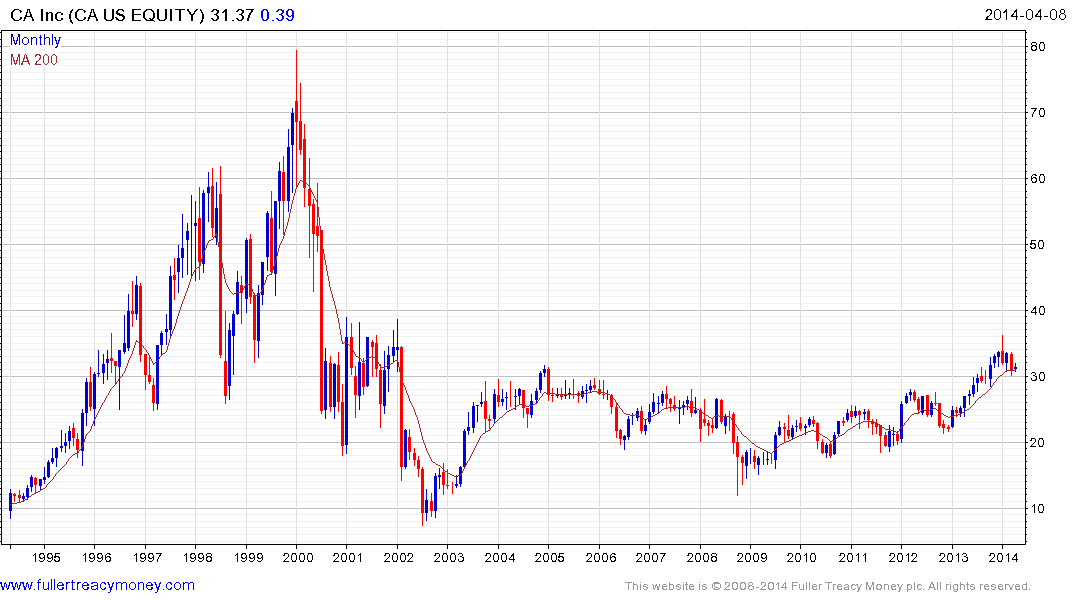 Investors have welcomed changes in Microsoft's (Est P/E 14.7 DY 2.82%) boardroom and the share broke out of an almost decade-long base. A sustained move below $30 would be required to question medium-term scope for additional upside. 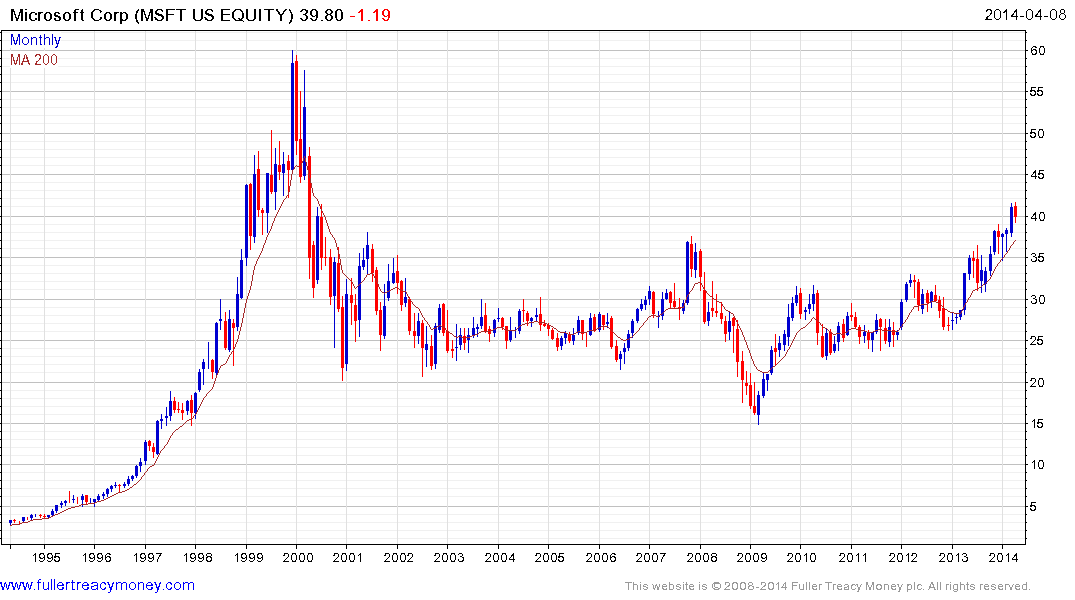