There’s one substantial difference between Battle for Azeroth and the trajectory previous expansions have followed, however. In the past, getting into World of Warcraft meant buying the base game and paying a monthly fee. The monthly fee is still in place — WoW hasn’t gone F2P — but the only expansion you need to pay for is the latest one. If you want to play through the base game, up to and through the Legion expansion, it’s just $15 per month.

One possible reason for the change is that Blizzard might be trying to woo players into coming back and trying content they missed without requiring them to pony up a lot of cash up front. Two players recently returned to my guild for this reason — once Battle for Azeroth went live and Legion became free, they signed up to play through the expansions they’d missed and experience the content. Granted, it’s not exactly the same content as it used to be — repeated “stat squishes” to keep player HP and damage under control, combined with repeated tweaks to accelerate the leveling experience, give areas a different feel than they had the first time around, even when you’re ostensibly playing through the same content. In some ways, it’s a much better game — World of Warcraft today is far more respectful of your time than it was 10 years ago — but now that I’m leveling an alt for the first time in many years, there are moments when I miss the older game and its slower but more dangerous pacing. The lack of difficulty spikes makes for fewer teeth-clenching rage spasms, but it also makes the game easier to predict.

The 3.4M sales that Blizzard is claiming set a launch record for BfA were impressive, but not much larger than previous cycles. Both Legion and Warlords of Draenor reportedly sold 3.3 million copies in their first 24 hours. This suggests initial launch sales don’t have much prediction power when it comes to how much of the player base will stick around and for how long — Legion, which was easily WoW’s strongest expansion in years, seemed to do a good job retaining players based on how many old friends I saw show back up and stick around for years, if not the entire expansion. We’ll see if the Battle for Azeroth holds players’ interest the same way.

The free to play model for computer games is challenging legacy subscription model games like World of Warcraft where you paid a steady monthly rate for hours of running around with friends completing various tasks.

The 2018 phenomenon of Fornite makes its money from in-game purchases for what are effectively cosmetic changes to one’s avatar, but those purchases do not affect game play. That is one of the most abiding attractions of the game. Kids and adults appear more than willing to pay for these add-ons because of the emotional bond they form with their character and the game. That is what is helping to drive revenue growth at the majority of game companies where in-game purchases now outweigh the initial outlay.

EA one the other hand is most noted for forcing players to both buy the game and make in-game purchases which do affect progress. Understandably that doesn’t go down very well with consumers. 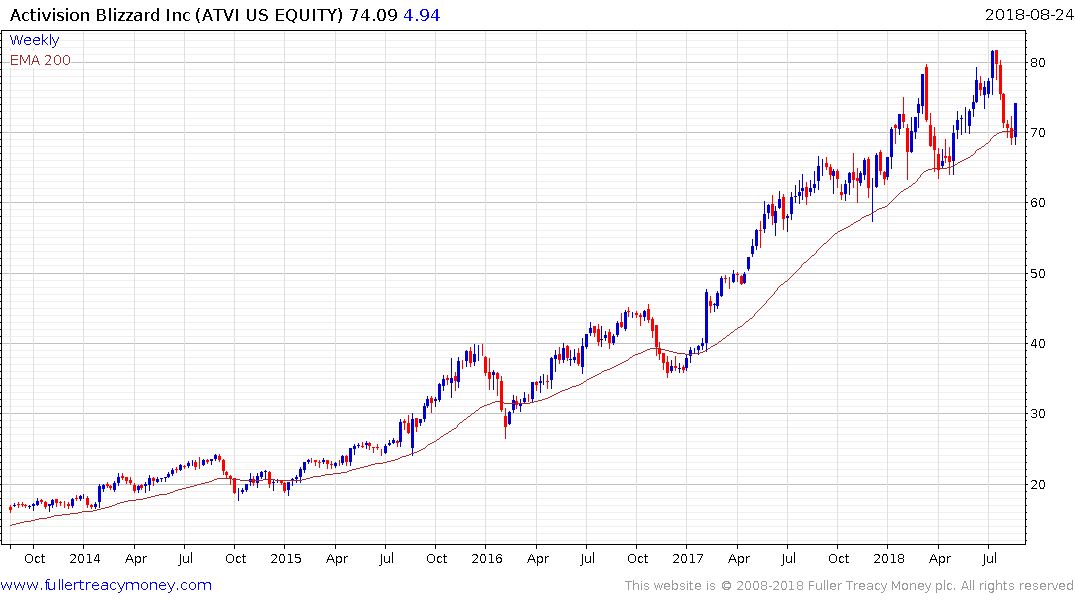 Activision Blizzard bounced last week from the region of the trend mean. 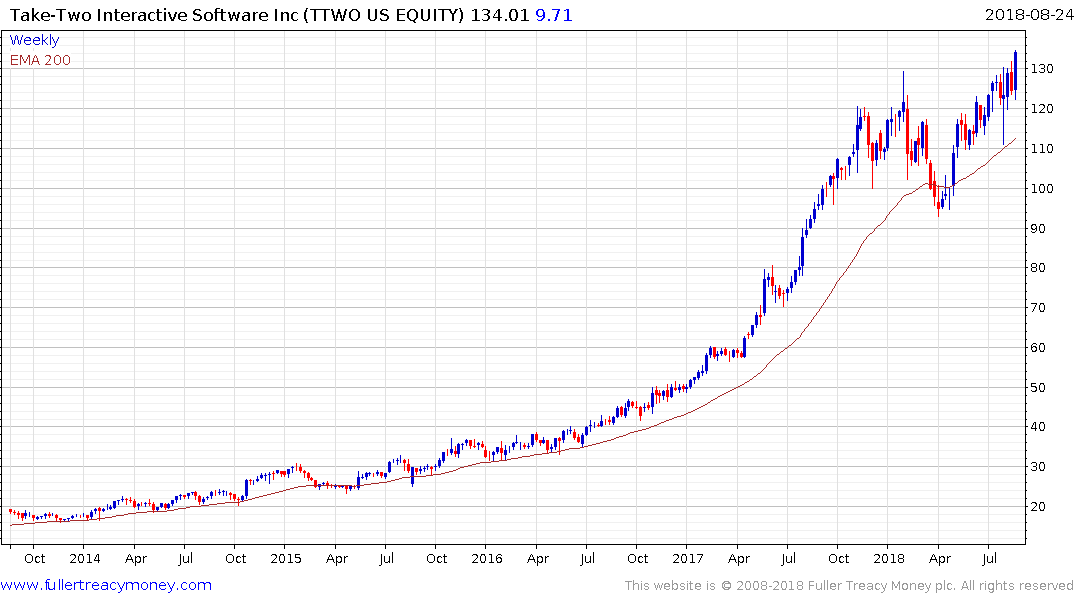 TakeTwo jumped to a new high, following impressive earnings and continues to hold the breakout. 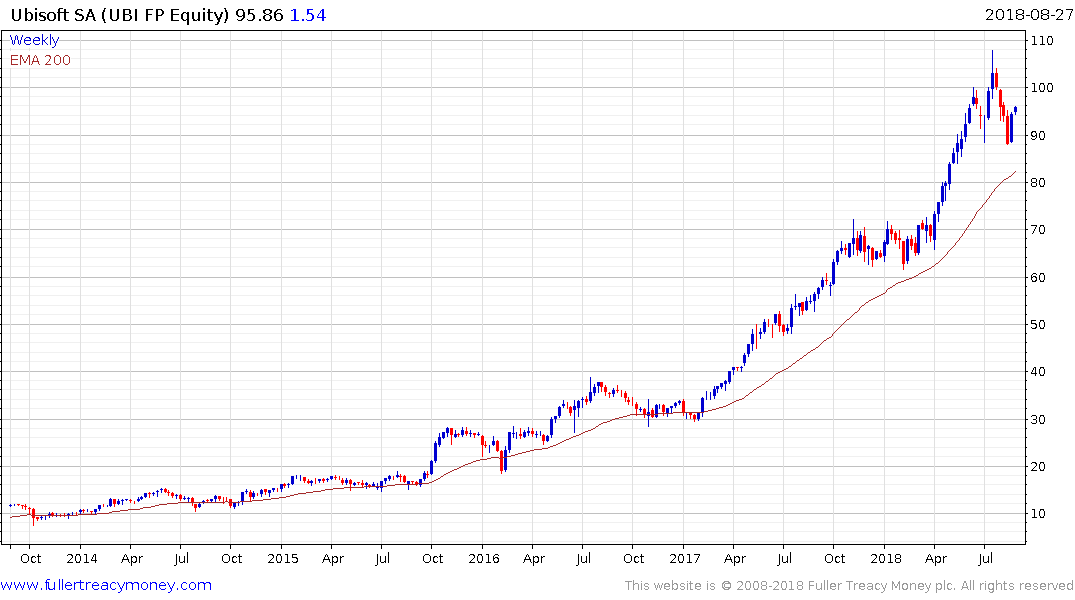 Ubisoft remains somewhat overextended relative to the trend mean. It firmed impressively last week and a sustained move below the €82 area would be required to question medium-term scope for continued upside. 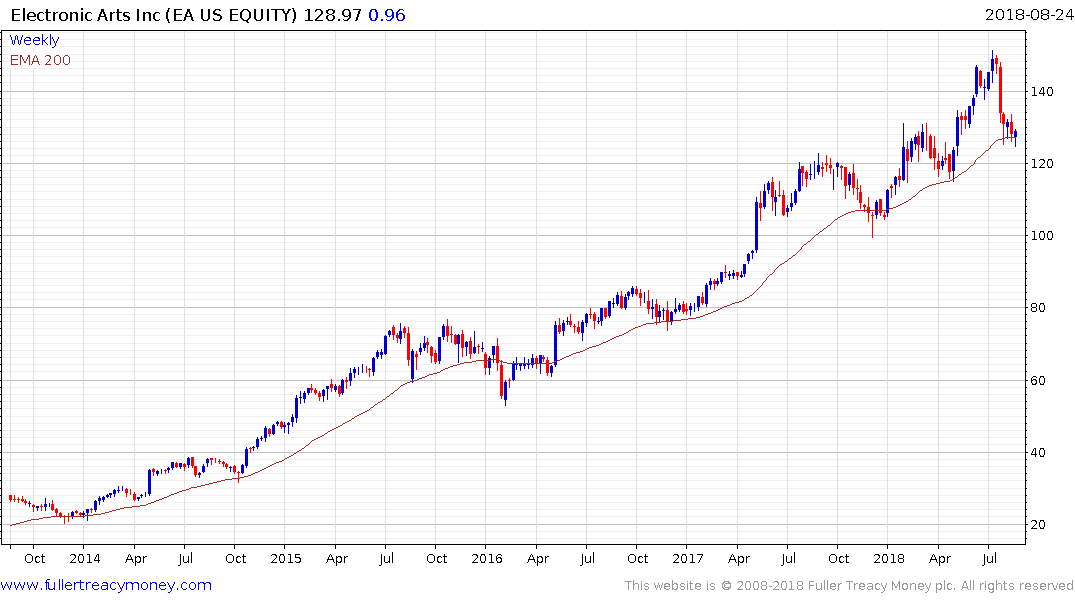 Electronic Arts is testing its trend mean and will need to bounce soon if the trend is to remain reasonably consistent.