In our base case, we expect sector RWA inflation of 14% or EUR 1.2tn. We expect a Basel 4 ratio of 9.9% on 2015, a 1.7% reduction from Basel 3, or EUR 120bn in equity. Given sector 2017 profits of EUR 130bn and 2019 implementation period, we think on average the sector is well placed to absorb the changes. By country, Nordics have the highest B4 ratios and France the lowest. Despite having the highest RWA inflation, Nordics still end up with the strongest B4 ratio because of high pre-existing buffers. France has the lowest B4 ratio by country given starting points and RWA inflation.

A wide range of outcomes is still possible depending on finalization
The range of outcomes could be wide, or impact sooner, depending on how the proposals are finalized. Two risks are; i) more granular, portfolio-based, RWA floors could lift sector RWA inflation to 22% and catch out more banks costing a further 0.6% of CT1; ii) national regulators may move faster than 2019 on harmonizing RWA by adjusting banks’ internal models tackling so called model risk. Our feedback is that management may have this higher up the immediate agenda because it may come sooner. In our 9 June 2014 Truth in Advertising report we looked at the issue of model risk.

?We screen stocks on Basel 4 and potential for payout surprise
Despite finalization of rules in the next year, and implementation not before 2019, guidance from banks will likely impact perceptions around capital and payout. Stocks we like on our base case are Lloyds, Unicredit, Banco, Danske, CBK and Bankinter. For Unicredit and CBK in particular, perceptions around relative capital strength could be weak, wrongly in our view. Our analysis shows they are better placed on Basel 4 than some may think with reasonable valuation. Out of this list, Lloyds and Banco could be more impacted if we get a tougher implementation of more granular RWA floors.

European banks were decimated by the financial crisis and the ongoing lack of appetite for consumer credit remains a headwind. Nevertheless, if the USA is any guide the introduction of a concerted effort to inflate money supply and steepen the yield curve should help some of the better positioned banks back onto a growth trajectory over the medium term. 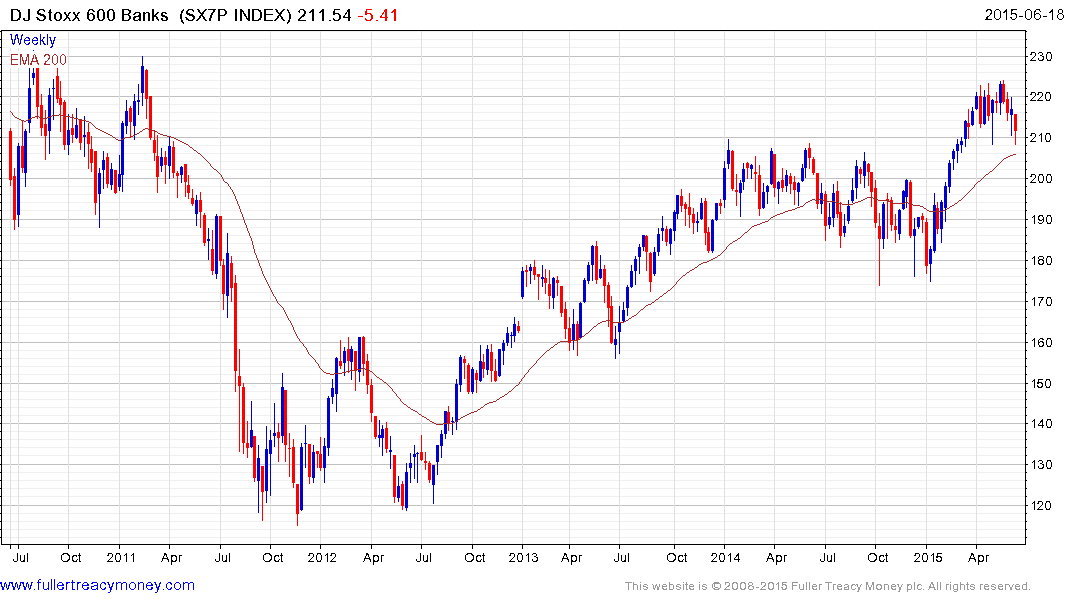 The Europe STOXX 600 Banks Index (P/E 22.3, DY 3.61%) rallied to new four-year highs following the introduction of the ECB’s QE program and has been consolidating that gain since. It found at least near-term support today in the region of the 200-day MA.

Broadly speaking there are two ways of looking at the European banking sector. There are those that have high yields because they have been able to sustain their dividends throughout the crisis and those that are only now beginning to pay dividends after a lengthy hiatus. I created this Excel sheet to highlight both dividend yield and also consecutive dividend growth. 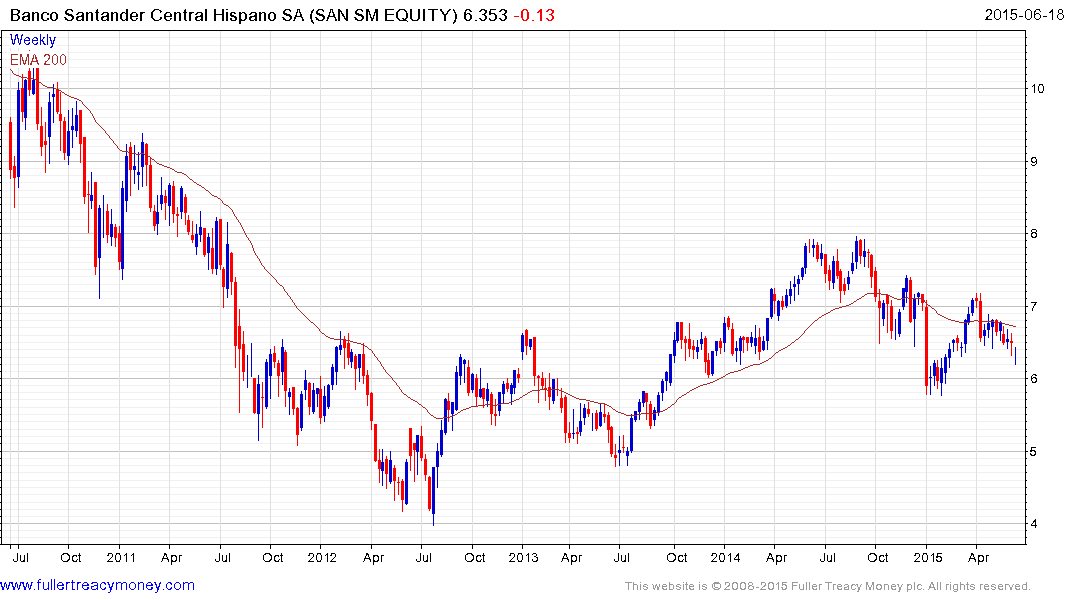 For example Banco Santander has the highest yield of any bank in Europe at 9.44% and has held its pay-out with only mild adjustments throughout the crisis. The share experienced a deep pullback at the beginning of the year when there was a doubt about the sustainability of the dividend. It has since stabilised and found at least short-term support this week in the region of €6.30.

Mediobanca, KBC Group, ING Group, Sydbank, Banca Popolare Emilia Romagna  and Lloyds Bank have all just started to pay dividends again and are forecast to increase their payouts over the next 3 years. 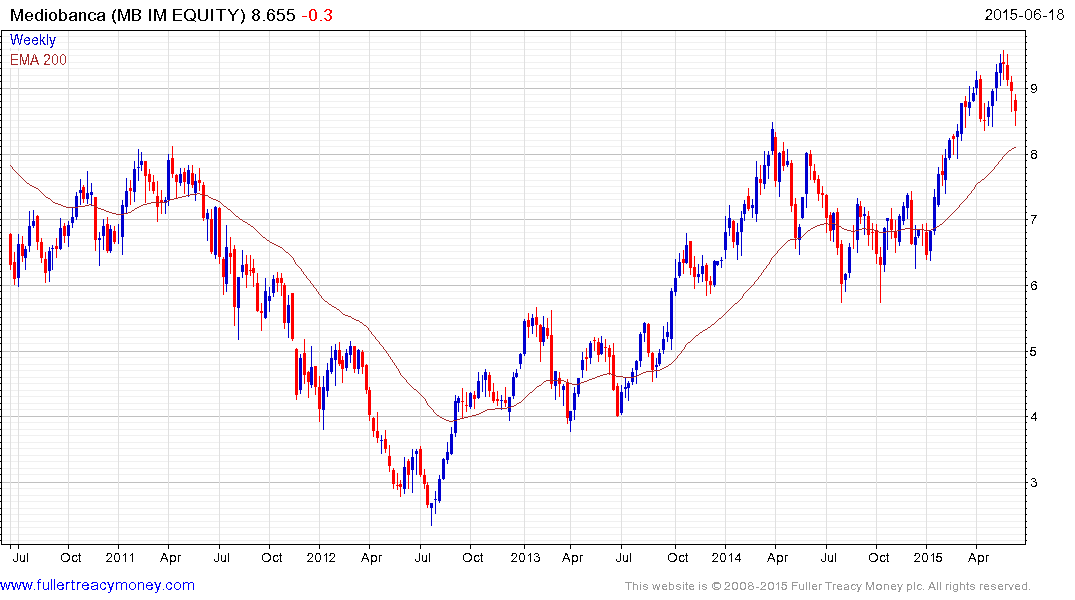 Mediobanca, KBC Groep and ING Group have outperformed their regional counterparts by a considerable margin not least because of the expectation they will return to paying dividends. Mediobanca found support today in the region of the May low near €8.50 and a sustained move below the trend mean would be required to question medium-term scope for additional upside. 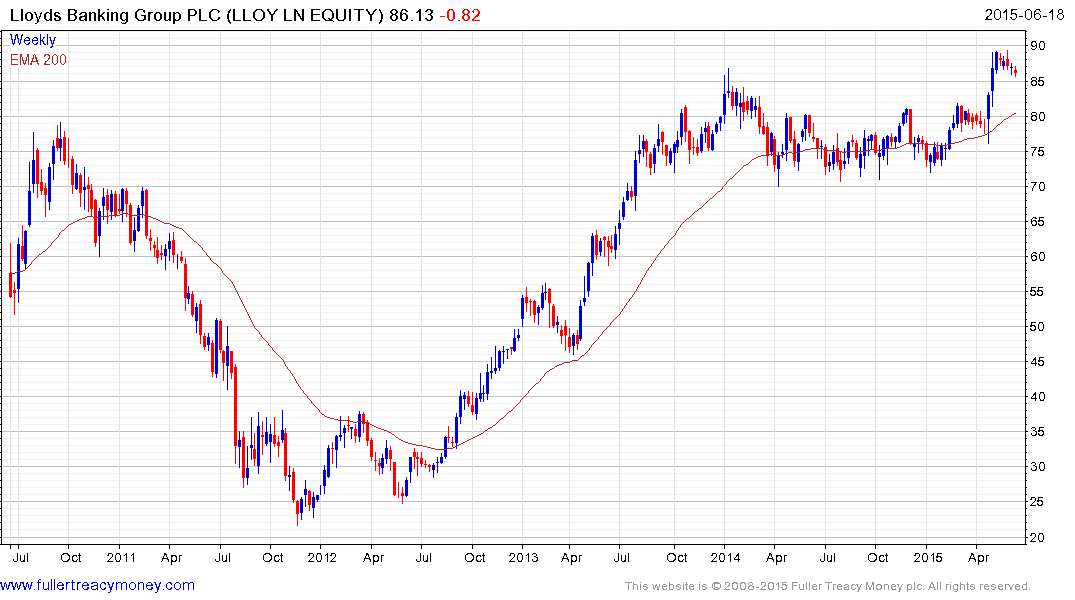 Lloyds broke out of an 18-month range in May and continues to consolidate the move. A sustained move below the 200-day MA, currently near 80p, would be required to question medium-term scope for additional higher to lateral ranging. 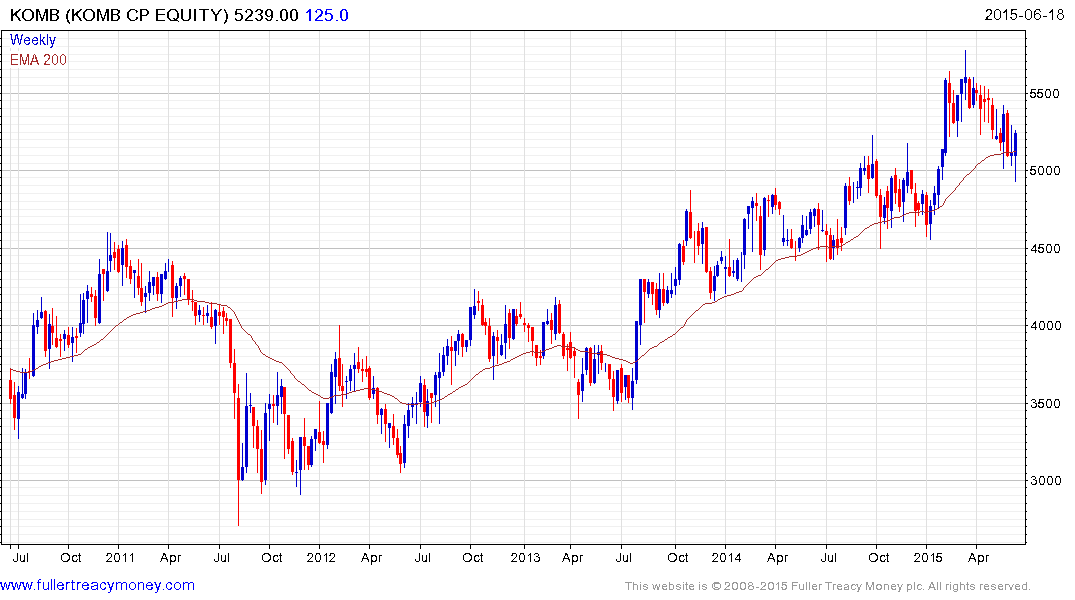 Czech listed Komercni Banka has an attractive yield of 5.93% and one of the more consistent uptrends in the region. It is currently bouncing from the region of the 200-day MA.