President Cristina Fernandez de Kirchner, who said May 6 that the government wouldn’t devalue the peso, is struggling to hold onto dollar reserves which have fallen 31 percent to $29.4 billion. Reserves are the government’s only source to pay foreign creditors. Since changing her economy minister, cabinet chief and the head of the central bank on Nov. 18, the peso has fallen 25 percent, the most in the world, according to data compiled by Bloomberg.

“They’re running out of cash and they’re sitting in the corner at the moment,” Phillip Blackwood, who oversees $3.5 billion in emerging market assets as a managing partner at EM Quest Capital LLP, said in a phone interview from London. “There’s a feeling in the market that they’re not going to intervene any more.”

The decline in commodity prices over the last few years has put pressure on the economies of related countries, which had become reliant on the income generated from the sector while prices had been higher. Despite the fact that the Continuous Commodity Index has found at least near-term support near 500, continues to extend its bounce and may be forming a medium-term base, the price of industrial resources in particular remains below levels producing countries had budgeted for.

In yesterday’s piece discussing Sterling cross rates with commodity currencies I highlighted the fact that a significant number of commodity related markets find themselves in the position that they need to devalue their currencies in order to foster their competitive edge in other parts of their economies. 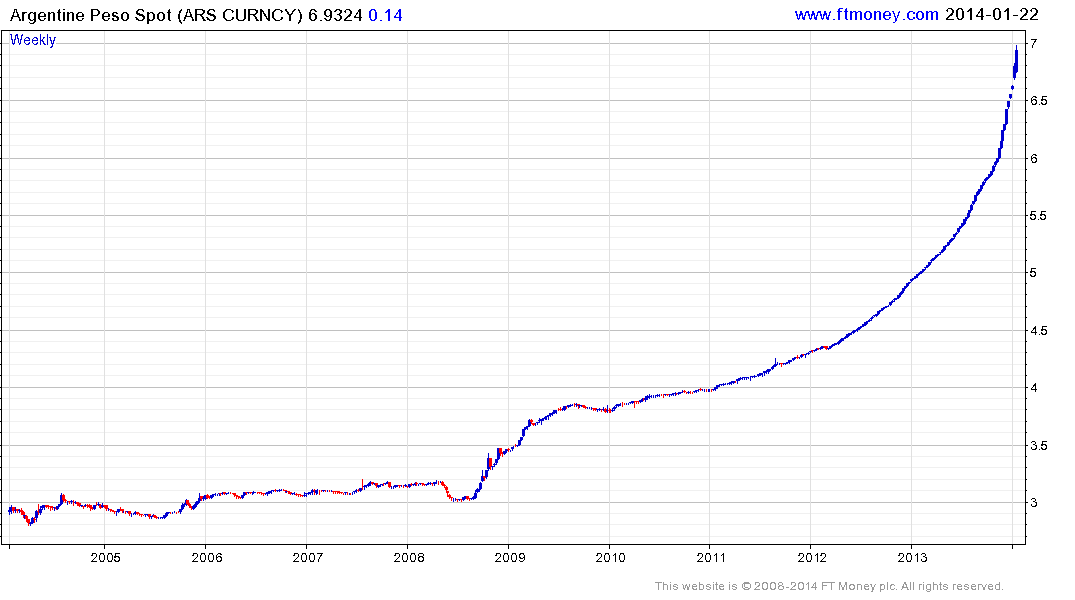 The Argentine Peso is an exaggerated example of the requirement to devalue a currency and is more reflective of a deficit in standards of governance than any other single factor. Nevertheless, the currency’s parabolic acceleration is a trend ending signal of undetermined duration as taught at The Chart Seminar. Once it ends, the country’s competitiveness will have been restored at least until the next devaluation. 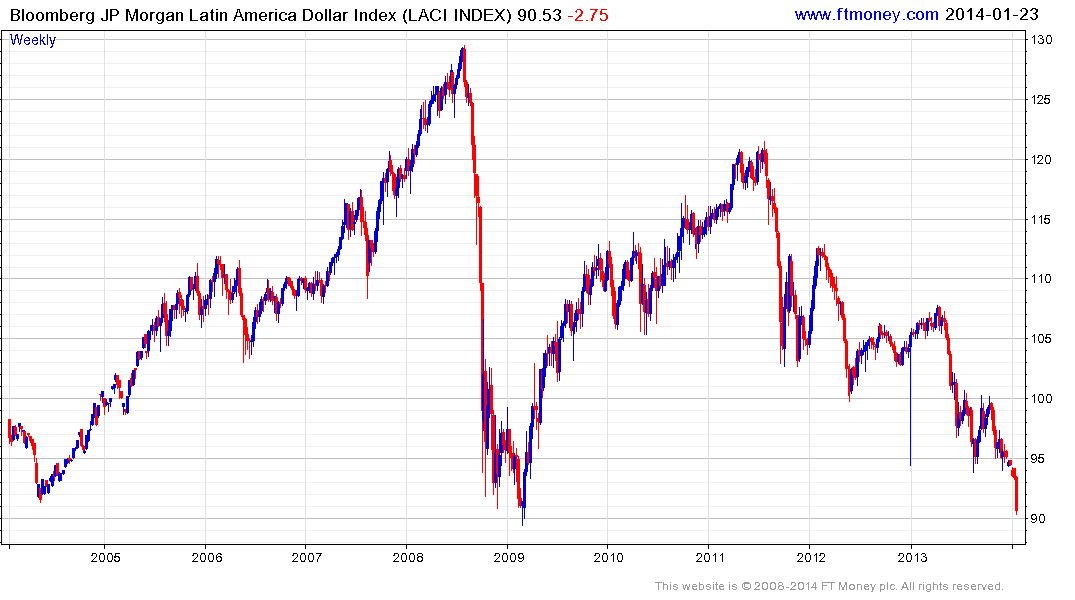 The Latin America Dollar Index has returned to test the 2003 and 2008 lows and a clear upward dynamic will be required to suggest the return of demand dominance in this area. The Brazilian Real and Mexican Peso both occupy 33% weightings in the Index. 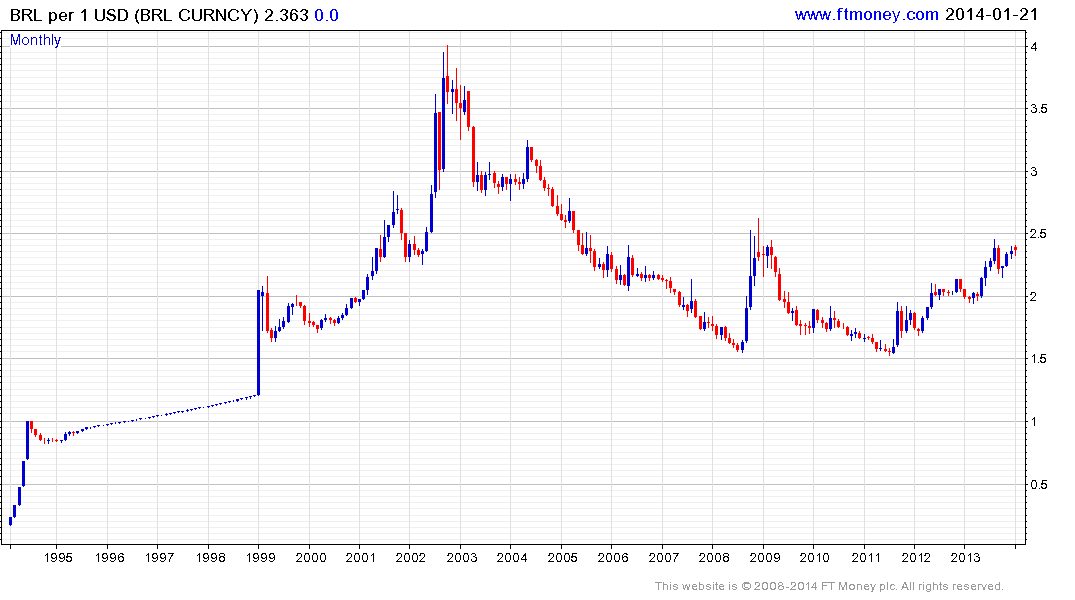 The US Dollar has been consolidating in the BRL2.4 area for much of the last six months and a clear downward dynamic would be required to question current scope for additional upside. 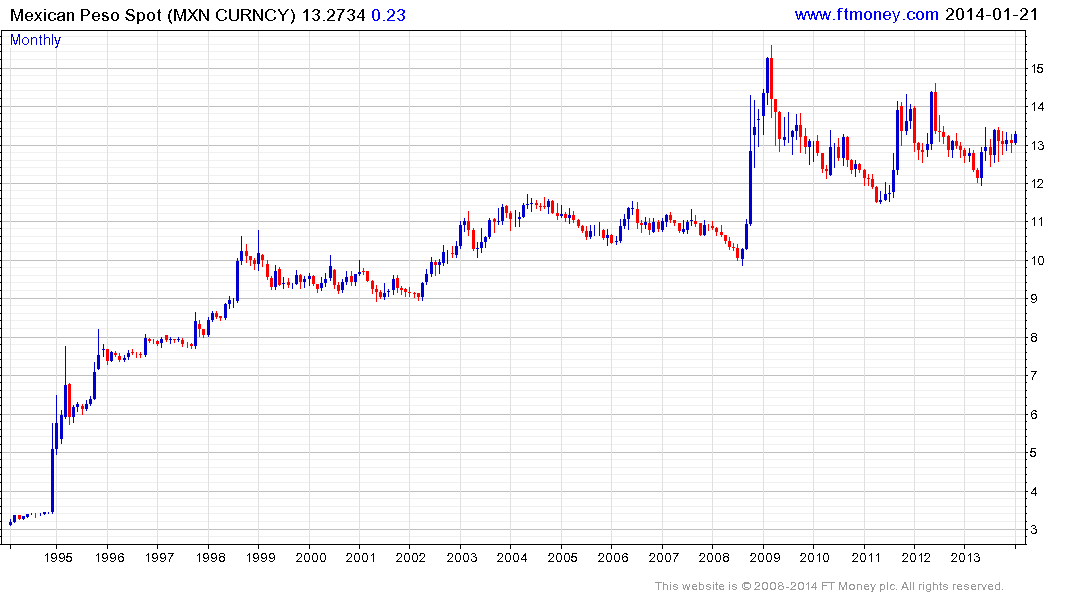 The US Dollar has also been ranging below the MXN13.5 since late June and has firmed of late. Mexico represents an interesting case at this level. Standards of governance are improving and attempts are now being made to foster investment in energy infrastructure. The country has a dynamic manufacturing sector and a land border with the USA. As a result, the Peso is unlikely to come under the same pressures are other commodity currencies and any additional weakness can be viewed as fostering the country’s competitive advantage in manufacturing. 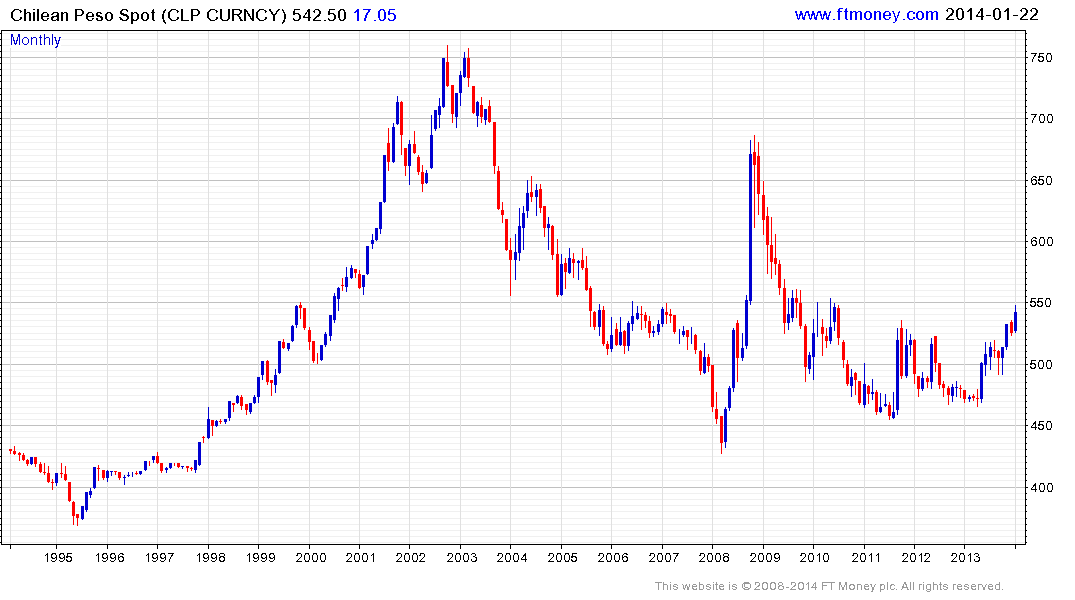 The US Dollar has base formation characteristics against both the Chilean Peso and the Colombian Peso. It is now testing the upper side of these congestion areas and clear downward dynamics would be required to question potential for successful breakouts. 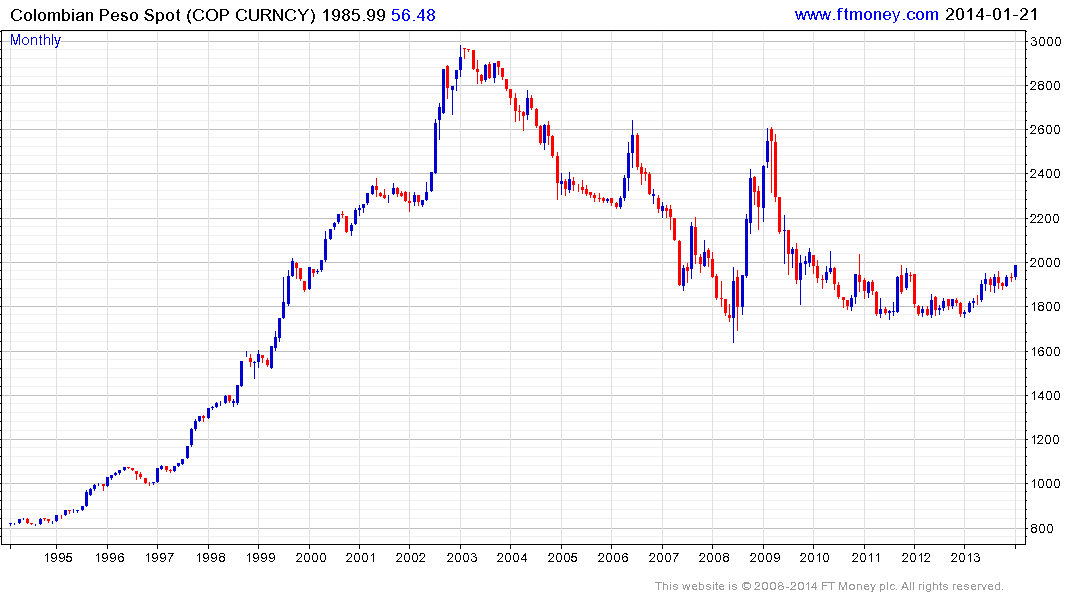