By 2016, pharmaceutical spending in Africa is expected to reach US$30 billion.  This value is driven by a 10.6% compound annual growth rate (CAGR) through 2016, second only to Asia Pacific (12.5%) and in line with Latin America (10.5%) during this period. Spurred by a convergence of demographic changes, increased wealth and healthcare investment, and rising demand for drugs to treat chronic diseases, this market potentially represents a US$45 billion opportunity by 2020.

The pharmaceutical growth is a reflection of economic strength accompanied by increasing healthcare spending. Sub-Saharan Africa (SSA), excluding South Africa, is notable in this regard: according to the Economist Intelligence Unit, its economies are growing faster than anywhere else in the world and this trend is expected to continue.

?The appeal of Africa lies not in its size – the continent accounts for just 3% of the global economy – but in the dynamics that drive sustainable growth at a time when the major established pharmaceutical markets face a more uncertain future. Underpinning these prospects are a series of positive economic trends: greater political and fiscal stability and improvements in pro-business legislation have led the United Nations (UN) to forecast that Foreign Direct Investment (FDI) in Africa could more than double by 2014, despite speculative money leaving the continent following the collapse of Lehman Brothers, and the Arab Spring restricting investment in North Africa.

This FDI is fuelling macroeconomic growth and vastly improving access to new technology. The recent boom in mobile subscribers reflects this trend: as of mid-2012, there were more than 600 million mobile subscribers on the continent, surpassing American and European figures. At the same time, major demographic shifts show an increasing number of working-age Africans, a rising middle class which accounts for 34% of the continent’s inhabitants, and an urban population expected to exceed that of China’s and India’s by 2050.

IMS Health recently IPOed in New York. The company which specialises in crunching complicated prescription data in order to sell it to pharmaceutical companies represents one of a new breed of information companies that are likely to become more common in the coming decades as big data moves into the mainstream. While they do not generate revenues in Africa, one can understand why the continent represents an interesting opportunity for them. 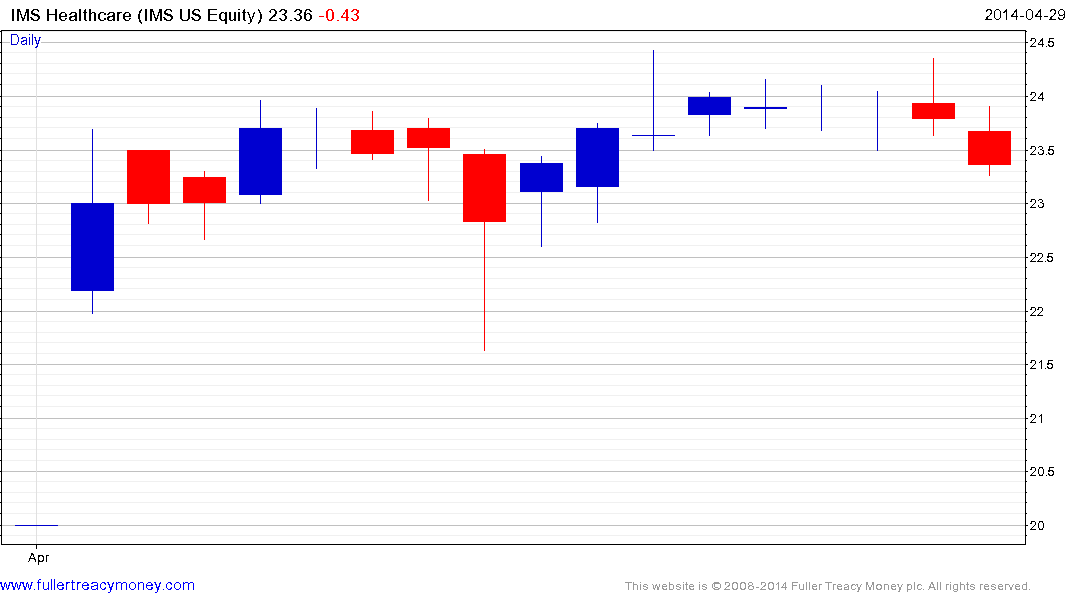 According to this report GlaxoSmithKline is the dominant provider of pharmaceuticals in Africa. However, with annual revenues of £30 billion the 3.8% represented by the Middle East and Africa barely moves the needle in terms of the share’s performance. Nevertheless, as a global Autonomy GSK represents one of the companies most likely to benefit from the continued evolution of the global consumer. The share (Est P/E 15.38, DY 5.2%) has been largely rangebound for much of the last year but a sustained move below 1500p would be required to question medium-term scope for additional upside. 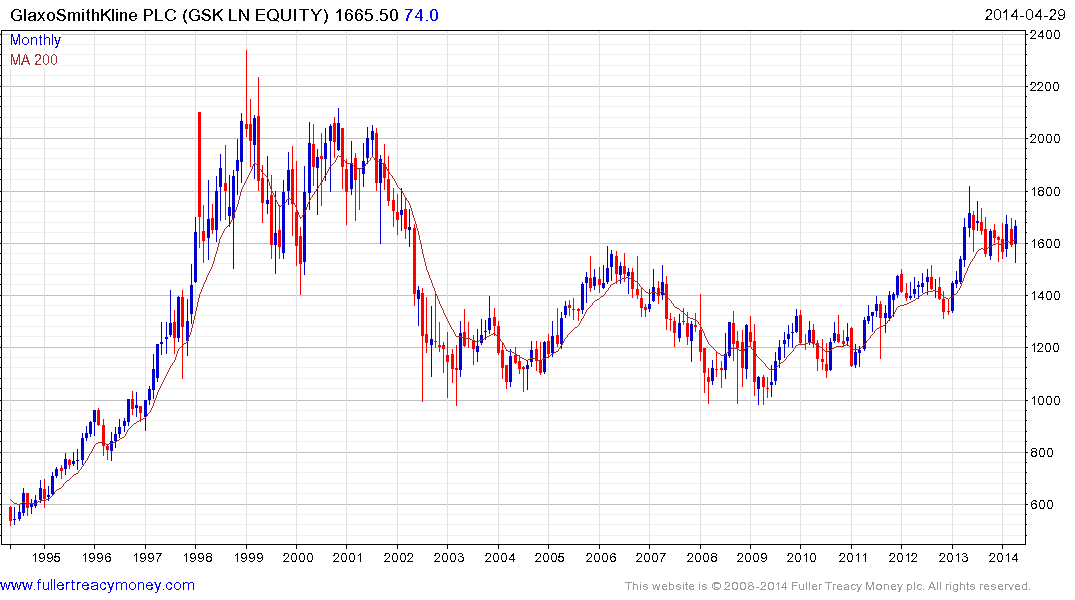 South African listed Aspen Pharmacare generates 35.5% of its revenue in South Africa and 10.2% in the rest of Africa. The share (Est P/E 25.48, DY0.56%) has lost momentum following an accelerated advance in September and it will need to continue to hold above or in the region of the 200-day MA if medium-term upside potential is to continue to be given the benefit of the doubt. 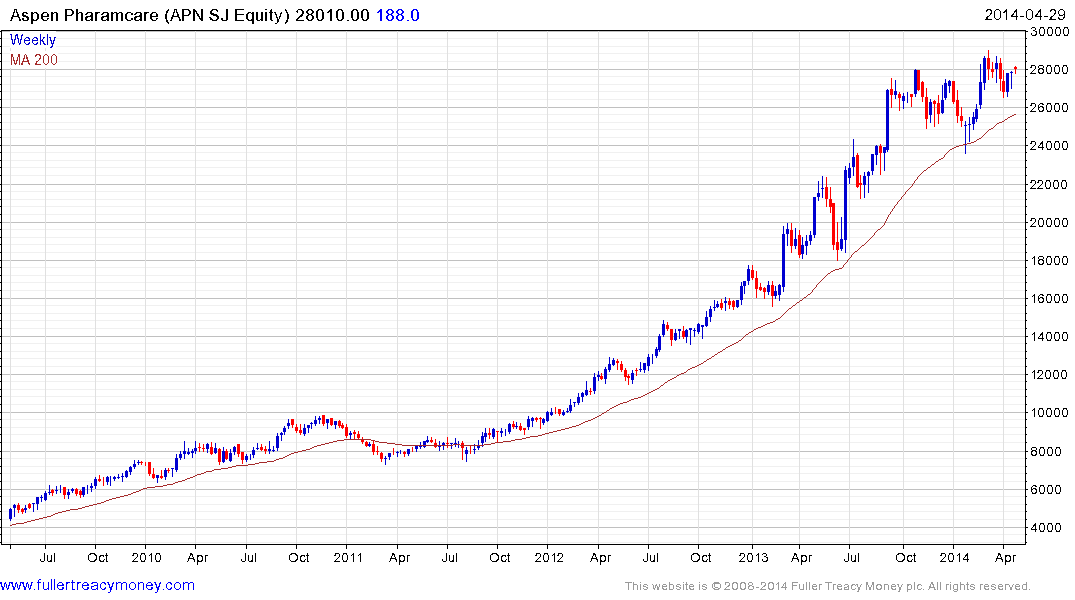 Africa has been one of the more fashionable destinations for investors over the last few years with the result that prominent regional shares now have rather expensive valuations. For example the UK listed Africa Opportunities Fund which invests directly in Sub Saharan Africa’s less liquid markets traded on a discount to NAV of 18% in early 2012. Following an impressive advance it now trades at a 2% premium and appears to be unwinding an overbought condition relative to the 200-day MA. 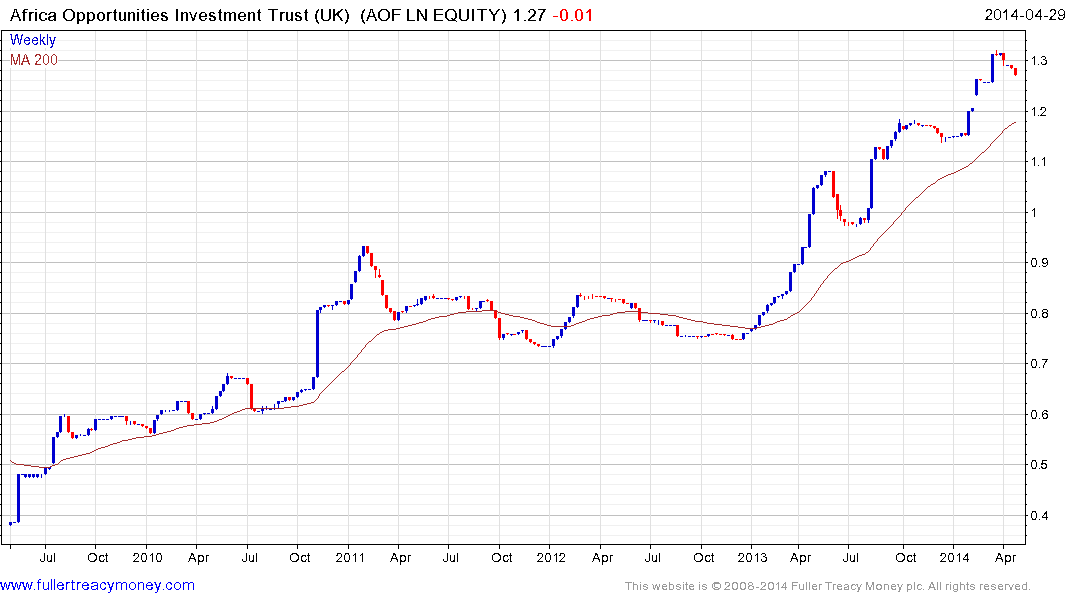