We may not have seen full capitulation yet, but there is evidence of investors de-leveraging and turning cautious. The reallocation from bonds & equities to cash is looking rather extreme and previous similar episodes were all followed by rising stock prices (see ‘Capital Preservation & Value Rotation’ dated 25 October). Likewise, retail investors’ sentiment is the most bearish since February 2016, which marked the bottom of the correction back then.

So, what to do now? December and January are typically good months for stocks and the G20 meeting, as well as the never-ending Brexit negotiations, could bring some good news… or not. The correction has somewhat improved the near-term risk/reward for equities on this front, but we struggle to feel excited about fundamentals and a catalyst for a sustainable rally appears to be missing (aggressive China stimulus and/or more dovish Fed). Headwinds from slowing growth, reducing liquidity, earnings downgrades and messy geopolitics are rising, which suggests that equities may not be out of the woods yet. However, risks are better understood by investors now and equities are not priced for perfection anymore. We forecast mid-single-digit upside for European equities and articulate our view around three key macro assumptions: 1) US upcycle is at a late stage, but is not finished; 2) Global growth is decelerating, but holding near trend; and 3) Geopolitics are messy, but may not get much worse.

The US recovery started almost ten years ago and is looking rather lengthy by historical standards. Business cycles do not die of old age, but many activity indicators are well above their previous peak at present. Fiscal stimulus led to a strong rebound in US growth this year and the output gap is positive, which is typically a late-cycle phenomenon. Unemployment is at a record low, corporate earnings are well above the historical trend following this year’s 25% increase and profit margins are at cycle highs. As good as it gets?

The concern is that while the US cycle is ageing, the Fed is turning more restrictive. Our US economists forecast the Fed to hike rates by 25bp again in December and then every quarter next year, which would leave the Fed Funds rate at 3.5% by the end of 2019. As a result, the gap between the level of rates and the level of nominal GDP growth is set to narrow materially.  The obvious risk is that the Fed does too much and too late. We note however that while real rates are turning positive for the first time in a decade, they are still expected to end 2019 at a much lower level than the ones seen ahead of past recessions.

As if the Fed’s quantitative tightening were not enough, the Chinese economy which is the destination for a good proportion of Europe’s exports has been slowing. That’s before we even begin to think about the threat represented by the Italian populists or the ongoing Brexit saga. With the ECB ending its quantitative easing program is it any wonder European markets have been underperforming.

Germany posted a quarter of negative growth which was attributed to weakness in the automotive sector. Bayer’s firing of 10,000 people this week highlights that it is not only the automotive sector that is under stress. German growth has been liquidity fuelled and it is suffering more than other countries from declining demand for its exports. It is hard to imagine the ECB is going to stand idly by if Germany posts another weak growth quarter considering how much of the Eurozone economy it represents. 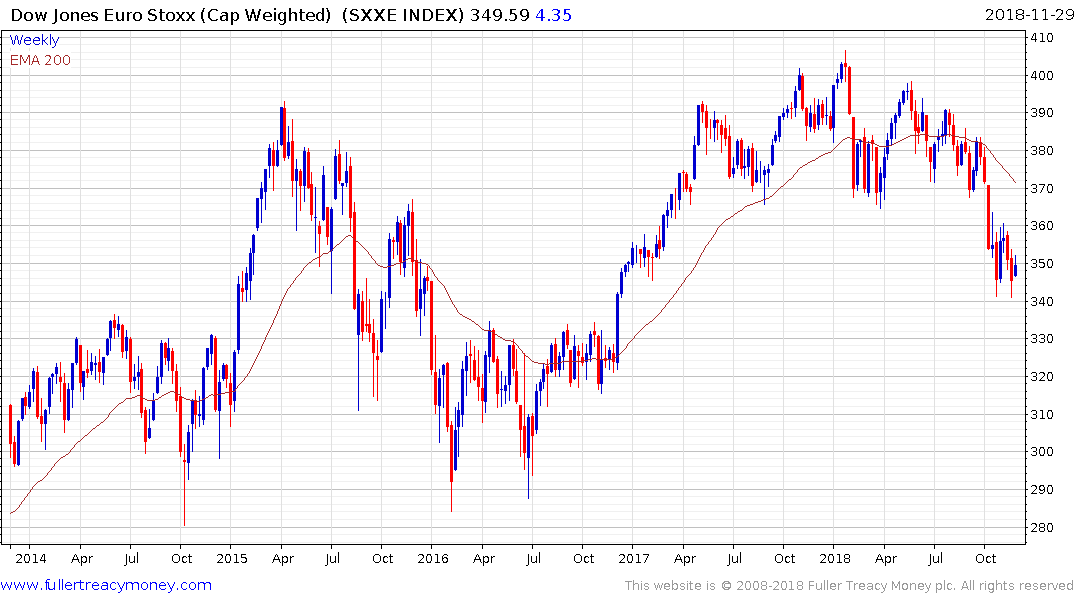 The Euro STOXX Index has paused over the last month but a sustained move above 370 would be required to question the medium-term supply dominated environment. 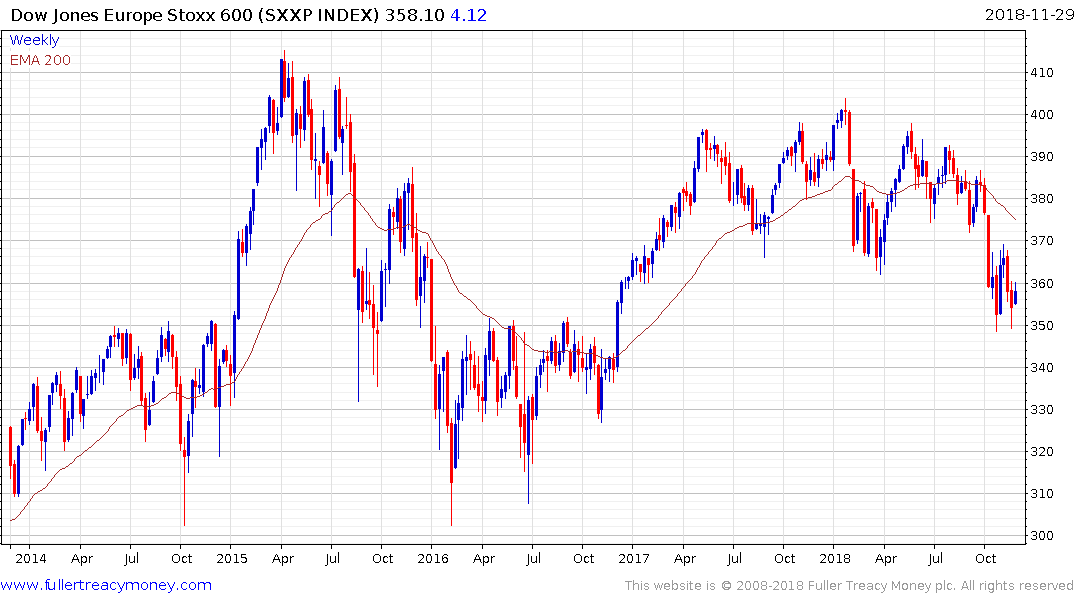 The broader Europe STOXX 600 Index has been ranging below 400 since 2000. It broke down from its almost 18-month range in October and a sustained move back above 375 will be required to question the medium-term downward bias.