The bin-Salman Interview What Does It Mean?
Comment of the Day

The bin-Salman Interview What Does It Mean? by Eoin Treacy

The announcement of this meeting has been very supportive for the oil price as it led to a large short covering by financial players, since a deal to freeze production should limit the potential downside in oil prices. Now with the statements by MBS in the Bloomberg interview last week, the outcome of this freeze deal is much more uncertain. In the interview MBS said that Saudi Arabia will only freeze output if Iran and other major producers do so. If all countries agree to freeze production, we’re ready," MBS said . "If there is anyone that decides to raise their production, then we will not reject any opportunity that knocks on our door.” This stands in contrast to prior statements from the Saudi Oil Ministry and from Russia which had suggested that a freeze deal could happen without any commitment from Iran. The market took this statement very negatively for the oil market because Iran has made no indications that they will join the freeze deal and even if they did, most analysts would probably doubt that production from Iran would be frozen anyway.

If Saudi Arabia indeed see any chance that a freeze deal cannot be accomplished then it is relevant to ask the purpose of even arranging the meeting. If a meeting is held and Saudi does not accept a deal without Iran participating then we believe a deal will not happen and if a meeting is held without a successful deal, then the oil price may drop quite significantly on that kind of news. Would that be in Saudi Arabia’s interest. Would MBS like to see a lower price again to inflict even more pain on the other global oil producers and hence set the stage for higher prices later? It seems odd that MBS is not coordinated with the oil ministry in this issue, but could his statement have been meant for domestic politics? And is it not very strange if MBS in the last minute should undermine the Russian effort to achieve this now famous freeze deal? Is this a negotiating trick to achieve something in return from the Russians vs Iran in Syria or other places?

The problem with this statement from MBS is that he outranks everyone else in Saudi when it comes to economic policy as he heads the newly formed Economic Council. This implies that if he actually means what he is saying here, there will be no production freeze deal in Doha, because we are confident that Iran will not take part in any production freeze deal. Before this statement by MBS we were 90% certain that there would be a production freeze deal coming out of the Doha meeting, because why hold this meeting if a freeze is not already agreed? It would, as described above, send the oil price in tailspin if a meeting was arranged and ended up with no agreement. After the MBS statements we see the chances for a freeze deal meaningfully reduced, maybe down to 50%.

If the meeting to hold the freeze deal in Doha is cancelled or if it is held without a successful outcome we would reduce our short term (3-month) price target for Brent which is currently 45 $/b. We would however not do anything with out 6-month target of 55 $/b and our 12-month target for 65 $/b. Our 24-month target (currently 70 $/b) on the other hand may be adjusted slightly higher due to the extra damage that may be inflicted to the supply side of a potential revisit to 25-35 dollar oil prices.

On Monday this week the Russian Energy Minister Alexander Novak however stated that “Russia can conduct extra talks with Saudi Arabia on oil output freeze before the meeting in Doha on April 17th”. Novak also stated that he is confident that an agreement will take place. This suggests that maybe the statements from MBS in the Bloomberg interview last week may have been meant for his domestic audience. Also the Kuwait OPEC governor Nawal Al-Fuzaia said on April 5 that there are indications that oil producing countries in both OPEC and non-OPEC are poised to agree on a production freeze to January levels. This statement seemed to give the market some restated confidence that there could still be a freeze deal in the Doha meeting on April 17th. But nonetheless the MBS interview last week has added a lot more uncertainty to the April 17th meeting than what the oil market would prefer. 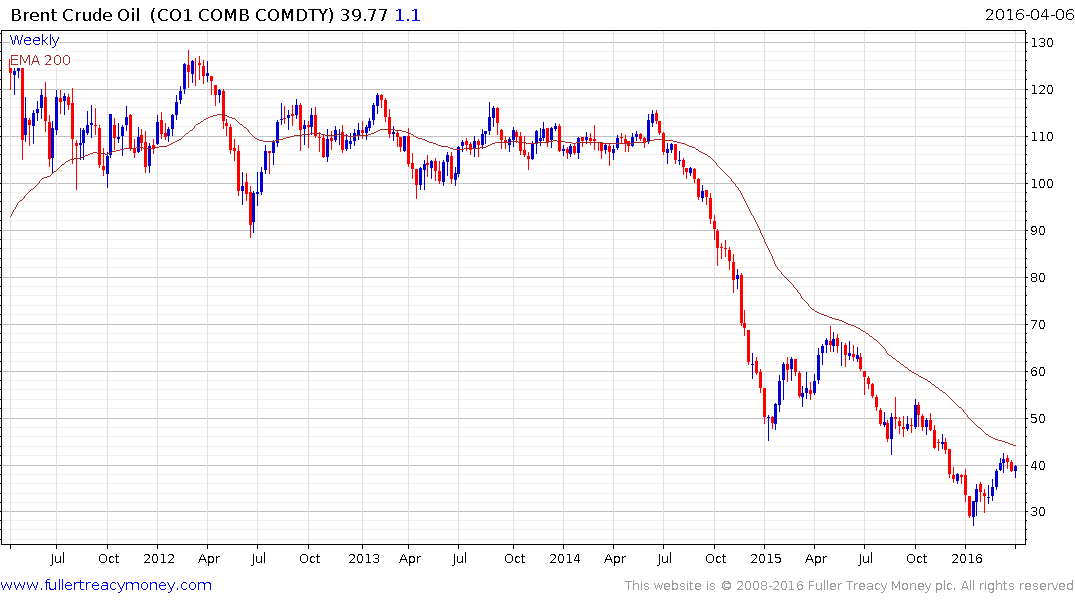 Brent crude prices firmed today on positive inventory data but the result of the April 17th meeting between major OPEC and non-OPEC producers is a major consideration for traders.

Saudi Arabia is fighting wars on three fronts and higher oil prices would certainly help with affording this adventurism as well as its highly accommodative domestic social programs. While Iran remains its greatest competitor for regional hegemony and the administration will not wish to give it any advantage, economic factors will probably take precedence.

Brent Crude unwound most of its overbought condition relative to the trend mean in the first quarter and some consolidation of that gain is now underway. This reaction is currently shallower than that posted in early February, highlighting just how much room it has in which to pause and unwind the short-term overbought condition. A sustained move below $35 would signal a deeper reaction and potentially a return to more volatile trading.