Nuclear Stocks are Making a Comeback
Comment of the Day

Nuclear Stocks are Making a Comeback by Eoin Treacy

HALEU is in between, with 5% to 19.75% of the uranium mass that power-source isotope. As an added bonus, HALEU can be made from down-blending the used, military-grade uranium. The U.S. Department of Energy (DOE) is so excited by HALEU that it’s close to approving a new generation of reactor designs it says “will completely change the way we think about the nuclear industry.” Power plants will be smaller, more efficient, produce less waste uranium and they won’t need their cores replaced for 20 years, unlike every 18 to 24 months for current reactors. At the moment, the DOE is in the process of deciding on the next generation reactor from 10 finalists; nine of them are designed to use HALEU.

The first market for HALEU will be micro-reactors for the military. The Pentagon is seeking to remove domestic bases from the wider electrical grid as part of its climate change-related plans to keep bases operational under increased extreme weather events. A Defense Department prototype reactor, Pele, should be available by 2024. Perhaps 130 reactors will be deployed. By mid-decade, utility owned micro-reactors will start rolling out for remote locations like interior Alaska and far-flung islands. They’ll generate perhaps 10 megawatts (MW) of energy with a one-time upfront fueling to last 20 years. More powerful, advanced utility reactors could come to market by 2030. Even current reactors will be able to use HALEU in place of the low-enriched stuff.

Militaries pioneered small modular reactors for use in aircraft carriers and submarines so they are also likely to be the first to deploy small reactors for use in other applications as well. The US military’s answer to climate change is to double down on nuclear reactor technology by taking bases off the grid and creating options for power in remote locations like Alaska and forward operating bases. 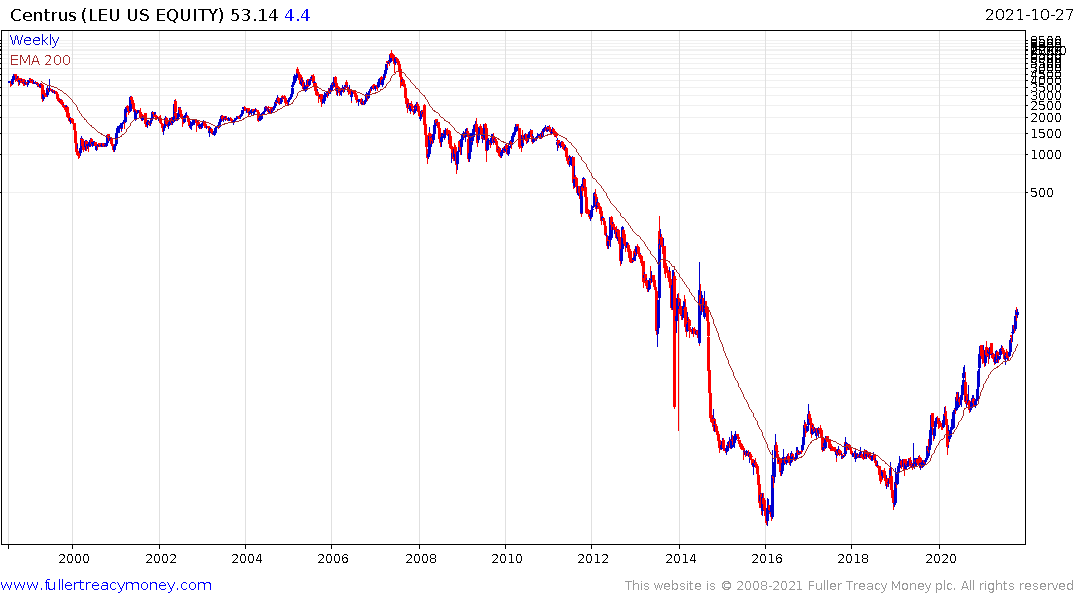 Centrus Energy is the post-bankruptcy name for USEC, which was the original company that processed enriched uranium for US nuclear plants. The share is rallying in a similar manner to the wider uranium sector.