Chinese electric carmaker NIO Inc. received confidence votes from at least two Wall Street analysts on Wednesday, after JPMorgan and Citi both upgraded their ratings on the stock.

While JPMorgan’s action was based on the expectation that the use of new-energy vehicles in China will quadruple by 2025 from last year’s levels, Citi pointed to multiple factors, including a very strong order backlog during the country’s Golden Week national holiday, an increase in NIO’s market share and a drop in battery costs.

JPMorgan analyst Nick Lai expects the penetration of new- energy vehicles in China to accelerate, jumping to 20% of the market by 2025 from less than 5% in 2019. Shifting customer preferences will help drive the trend, along with an expected drop in the cost of electric-car and battery production, the analyst wrote in a note.

300 miles of ranges appears to be good enough for most investors. Whether that is the case for consumers is another question entirely. The practicality of daily life means 300 miles is probably enough 99% of the time but it also depends on ready access to charging facilities.

Right now, even quick charging like Tesla’s superchargers take 20 minutes for 50% or 5 minutes for 75 miles of range. That implies multiple trips to the charger in a week. Most people fill up once a week so that would imply significant changes in behaviour or additional expenditure on at-home charging facilities.

When I called up about having a charging socket installed in my home, the quotes were all in the region of $1100. Using a regular socket for charging is really only designed for emergency use and is very slow.

None of that is relevant at present because investors are happy to support electric vehicle company shares because they have fewer regulatory hurdles to overcome than conventional manufacturers and have less sunk capital that is looking increasingly worthless. That leads the conclusion they will overtake the wider auto industry within the decade. 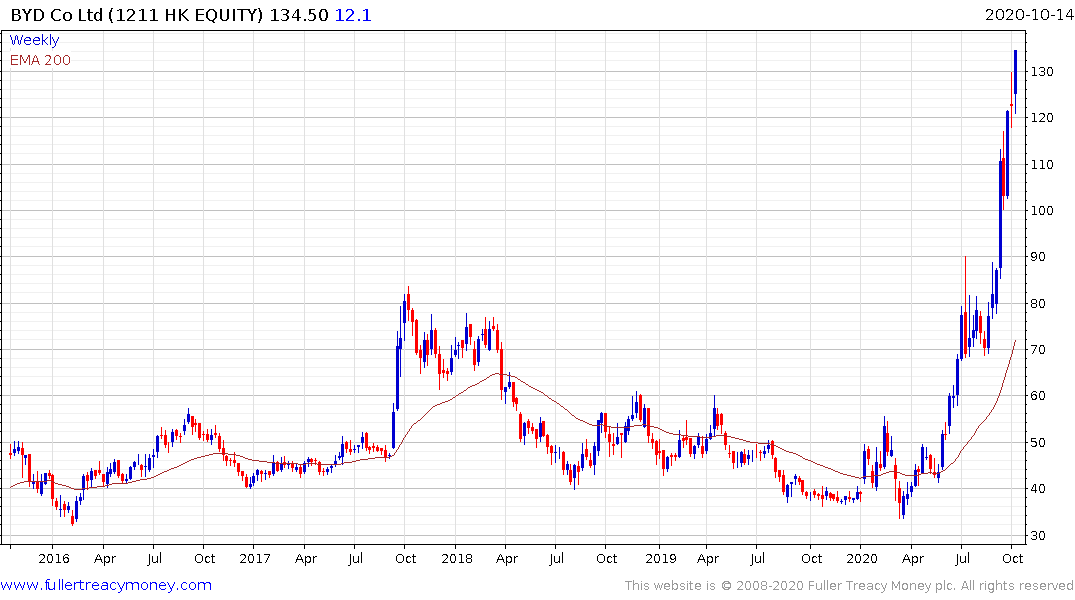 BYD had been ranging in a volatile manner below the 2009 peak but broke higher in an impressive manner in September. It continues to extend this steep uptrend. The first clear downward dynamic sustained for more than a day or two is likely to mark a peak of medium-term significance. 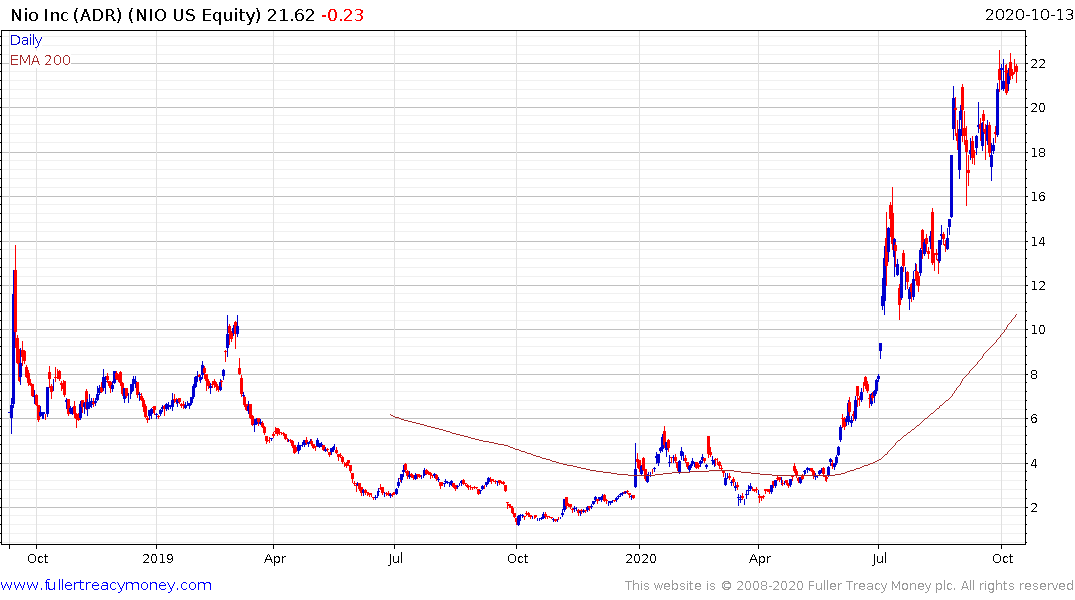 NIO IPOed in 2018 and broke out to new highs in July. It also remains in a steep uptrend. 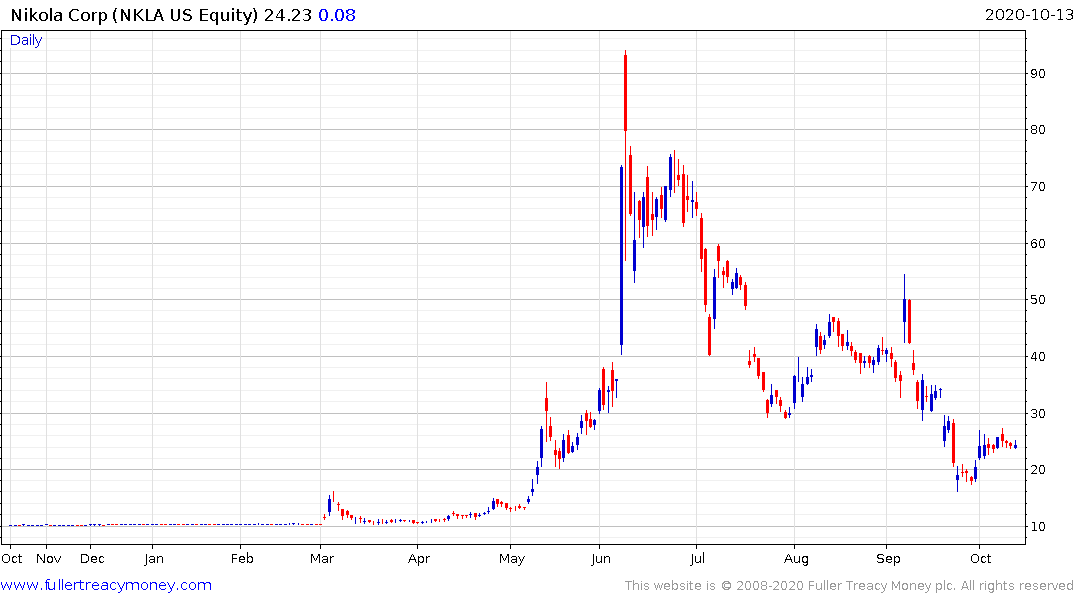 Nikola was a darling of day traders in May and June but has since given up all of its advance. It is now attempting to demonstration support in the region of the upper side of the base formation. 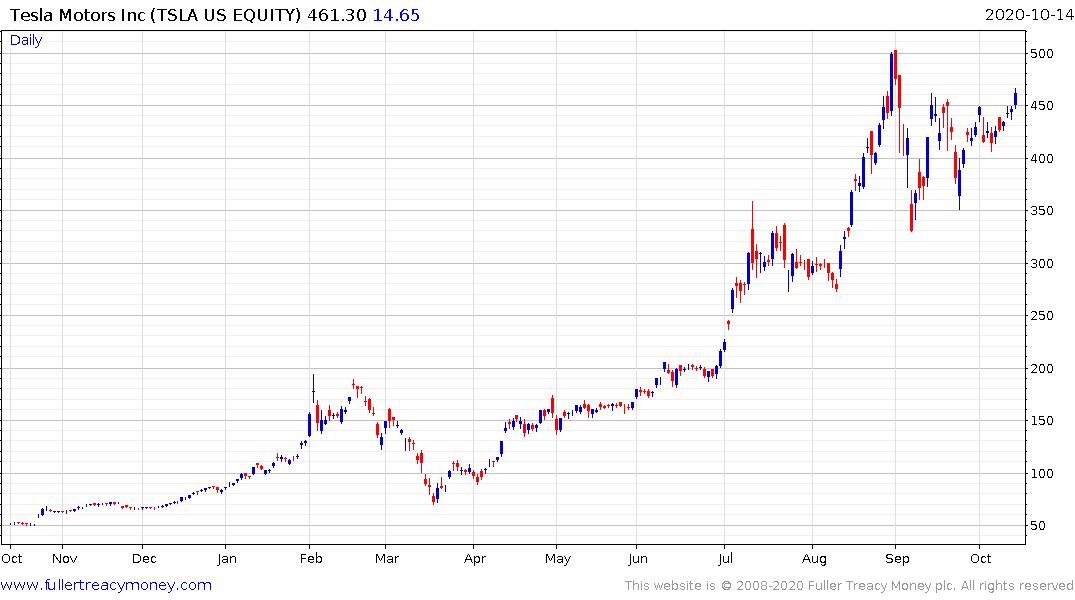 Tesla firmed today to break the short-term sequence of lower rally highs and remains in a steep uptrend.