Musings from the Oil Patch September 22nd 2015 by Eoin Treacy

Other than public debt and equity, the E&P industry has also been seeking other sources of capital. Drawing down bank credit lines has been one avenue, but lower oil prices will mean reduced asset values, especially as some of the assets will be redlined because they have been in the undeveloped category for too long so will be considered uneconomic. With the upcoming bank loan redeterminations, we expect to see increased E&P sector financial stress. In March, the last time loan redeterminations were conducted, oil averaged $71 per barrel. Now, the average is $57 a barrel; helped by the spring run-up in oil prices. By the fourth quarter, it is possible the average oil price will be in the $40s. A 40% haircut in the borrowing base will impact 2016 E&P spending.

The E&P industry has also lived off its earlier production hedges. As a result, some companies were being paid in the $90s a barrel for their output, but most of those high-priced hedges are running out. An analysis by investment banker Simmons & Company International and quoted by The Wall Street Journal, cited 36 U.S. oil producers with hedges covering 33% of their 2015 output at an average of $80 a barrel. Next year, those companies only have 18% of their output hedged, and at an average price of only $67 per barrel. Those high-valued hedges during the first half of this year was a reason why layoffs and G&A cuts were not severe, if at all. Management teams’ days of living in a world of unreality is rapidly coming to an end, and the pain will be severe.

Another source of capital for the energy business has been private equity - pools of capital that can be used to start new companies, buy companies on which to build much larger companies, and to provide capital for companies to grow. Data for the past three years (Exhibit 10) shows that private equity invested $43 billion in 2012, $36 billion in 2013, but only $11 billion in 2014. Private equity deals this year have been sparse as fund managers struggle to find attractive deals in an environment in which it is difficult to assess what companies are worth. That also explains why deal-making in 2014 was down sharply from the prior two years.

As a result of the 2010-2014 period of high oil prices and expectations that these prices would only go higher in the future, private equity targeted the energy business due to its large capital needs. Virtually every major private equity firm raised one or more energy-focused funds. Those private equity firms who have ploughed the oil patch for years were easily able to raise large new funds off their successful track records. With billions of dollars sitting in these energy-focused private equity funds, finding and executing deals has become a high-pressure effort.

Increasingly, private equity managers are recognizing that this potential avalanche of capital seeking energy deals is their biggest problem. It has, and is, leading to overvalued deals. As long as this money has to be put to work due to the mandates of the funds, the pain in the industry is likely to continue. The energy business truly needs to have the capital flow turned off, not merely turned down. Only then can the industry washout occur and the healing begin.

Here is a link to the full report.,

The energy sector remains in a state of flux and the stress some of the more overleveraged companies are coming under has seen yields almost double in the last two years. BBB Energy 5-year yields are not at high absolute levels relative to history but the trend remains clear. 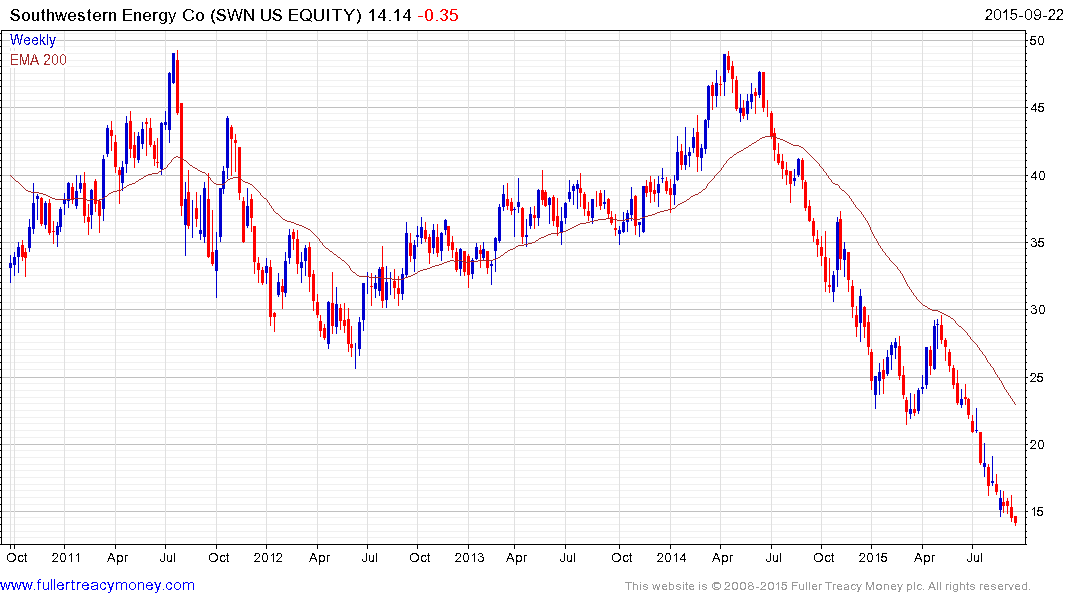 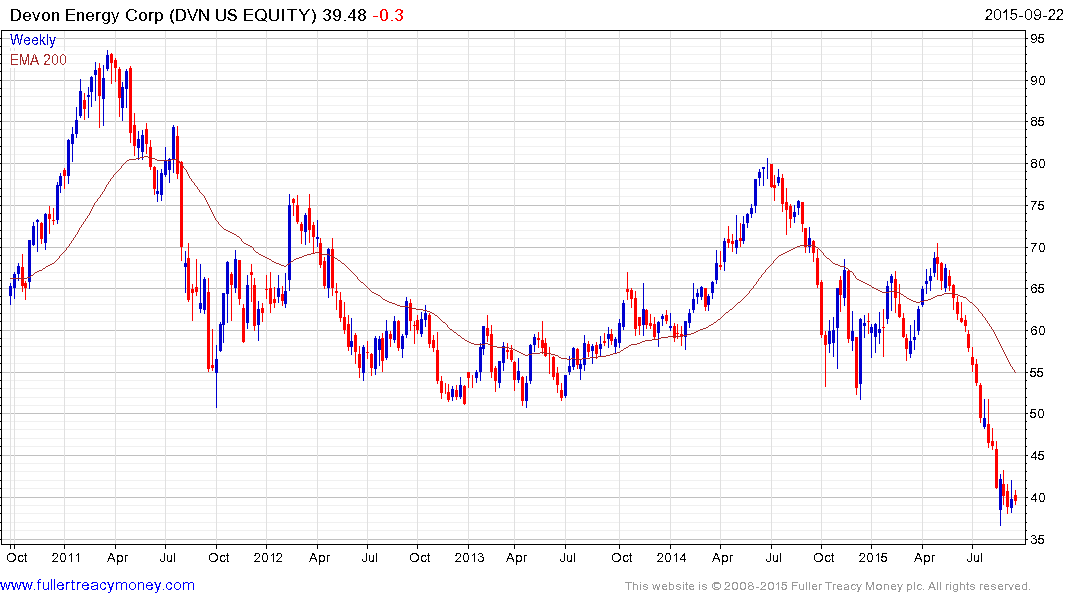 High profile companies like Southwestern and Devon Energy are BBB rated and their ladders of hedges on future production are offering scant support after a year of low pricing. The shares continue to extend their steep downtrends and will need to break their respective progressions of lower rally highs to begin to suggest mean reversion. 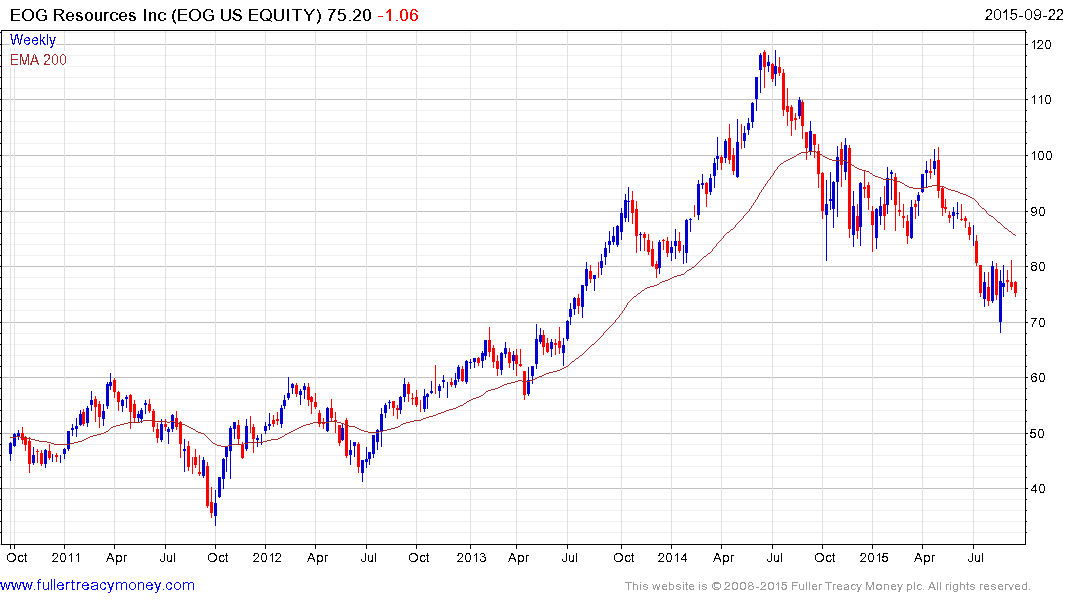 EOG Resources is A rated and has held up better but the low near $70 will need to hold if support building is to be given the benefit of the doubt. 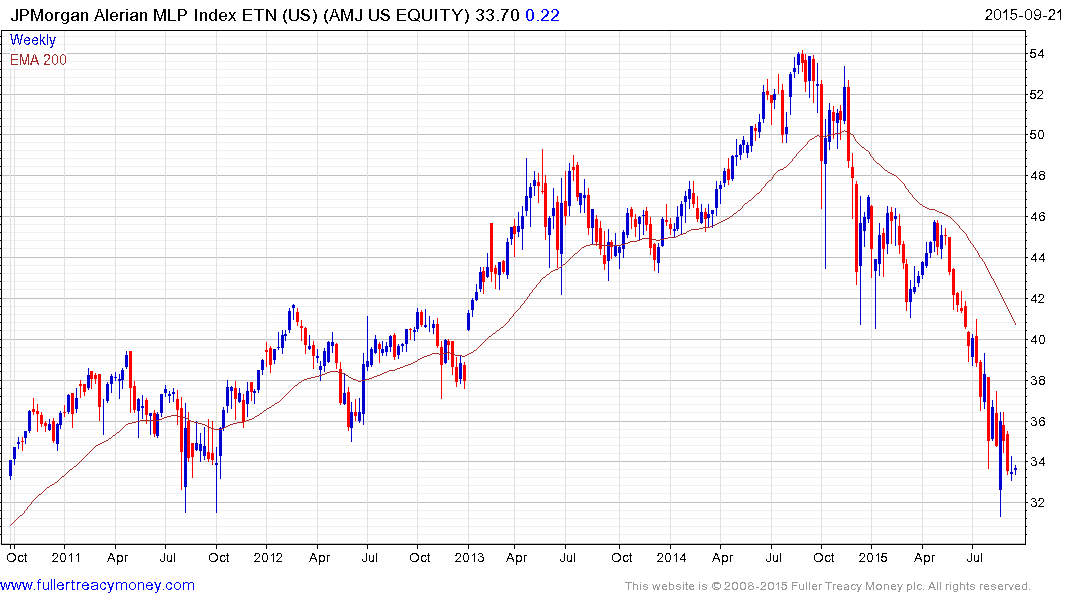 The JPMorgan Alerian MLP Index, which is comprised primarily of pipeline companies, yields over 7% but will need to hold the low near $31 if support building is to be given the benefit of the doubt.