Musings from the Oil Patch
Comment of the Day

Musings from the Oil Patch by Eoin Treacy

The analysts’ takeaways were that the Saudi Arabian economy was healthier than many thought, thus pressure for the country to lead the OPEC charge to substantially higher oil prices was soon dissipated. The headlines also helped explain King Salman’s willingness earlier to reverse the salary and benefit cuts for ministers and to grant salary bumps for the military and air force pilots. With the shrinking budget deficit and the ability of the kingdom to tap global debt markets twice in the last six months, the government felt comfortable it could increase spending without necessarily needing higher oil prices. Further comfort in its spending decision was provided by the point about non-oil revenue in the first quarter exceeding the government’s expectation. That latter point is important and helps explain why MBS says that Saudi Arabia’s debt will not exceed 30% of GDP. This is in contrast to many countries where total government debt equals or exceeds the country’s GDP. The shifting economic condition in Saudi Arabia is a long-term dynamic at work within the global oil market, and requires that analysts reassess their view of the kingdom’s strategy toward higher oil prices in the future. The last pillar supporting the significantly higher oil price forecast is the requirement for a favorable oil price backdrop in order to launch the initial public offering of Saudi Aramco, the state oil company.

Crude oil prices are likely to remain highly volatile in the near-term as the shoulder months for oil demand and the restarting of refineries from the heating oil to gasoline turnarounds is creating inventory fluctuations. Many of these inventory fluctuations are not being accurately captured in the average analysts’ weekly inventory change forecasts, setting the oil market up for weekly surprises between the data and estimates. A key driver over the next few weeks will be people trying to guess the outcome from the May 25th OPEC meeting, but the outcome seems preordained. A negative surprise will be if the OPEC members fail to extend the production cut agreement as assumed by conventional wisdom. A positive surprise might be an increase in the production cut volumes, or an extension of the production cut agreement into 2018. Either or both of those actions will likely be viewed skeptically as greater volumes and longer time horizons create an environment that encourages increased cheating by OPEC members. If there has been a surprise from the current production cut it is the high compliance by the OPEC member countries. Is that a reflection of desperation or a true commitment to greater output discipline?

The Saudi Aramco IPO will be a major event and the price of oil is an obvious consideration in the valuation that will be achieved. However the broader question for Saudi Arabia, in a market which is concerned both with equilibrium and increasing geopolitical tensions, is to ensure it affects an aura of stability and a lack of overt unilateral price manipulation strategies. That suggests they have no choice but to negotiate for concerted efforts to support prices, however successful those might be.

The most important point for Saudi Arabia is that the IPO does in fact go ahead. How high the valuation is will be important but is a secondary consideration because the objective of using the asset as a surety which can be borrowed against in future leaves open the potential to revalue it later. 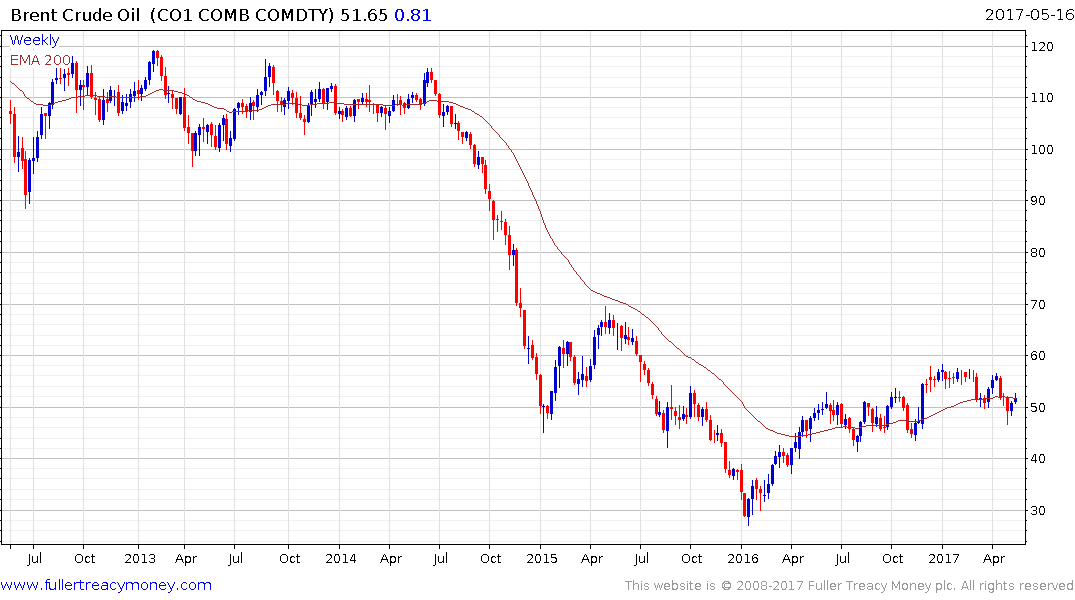 Brent Crude oil has bounced over the last two weeks to unwind a short-term oversold condition but the easy part of the rally has already occurred. A sustained move above $56 would be required to question the downward bias to trading. Meanwhile the most likely