The issue stems from the fact that Linn is taxed as a master limited partnership, or MLP, rather than a corporation, a popular arrangement among energy companies when oil prices were soaring.
In good times, that status allowed income to flow straight through to investors without the Internal Revenue Service taking a cut at the corporate level. Linn distributed some billions of dollars of cash to investors as U.S. energy production boomed.

But the collapse in oil and gas prices has exposed the structure’s double-sided risk: Investors with potentially worthless shares—or units, as they are known—may nonetheless owe taxes on debt that is forgiven in a bankruptcy or an out-of-court restructuring.

That is because MLPs pay no corporate taxes and instead pass certain tax burdens, along with a share of their income, to investors. Debt forgiven in a restructuring counts as noncash income, or “cancellation of debt income,” which creates a tax liability for investors without an associated cash distribution.

The roughly 60% plunge in oil prices since the summer of 2014 already has sent a number of energy companies into bankruptcy court, and more are expected to follow. Fitch Ratings expects the default rate for U.S. high-yield energy bonds to rise to 11% by the end of the year, compared with 1.5% for bonds outside the battered energy and metals-and-mining sectors.

A gusher of bankruptcies and debt restructurings could be especially painful for MLP investors, most of whom are individual investors. Big institutions like BlackRock Inc., as well as many endowments and foreign institutions, can’t legally own partnership units or don’t want to, given their complexity.

I’ve given talks and conducted The Chart Seminar all over the world but I was never asked about the tax implication of a decision to sell until I came to the USA. The tax code is complex, rates are high and sometimes tax savings can reside where you might not expect them such as in trusts. The details described above highlight some of the reasons why the MLP sector underperformed so acutely while oil prices were falling but with such a panic to get out, is the bad news already in the price? 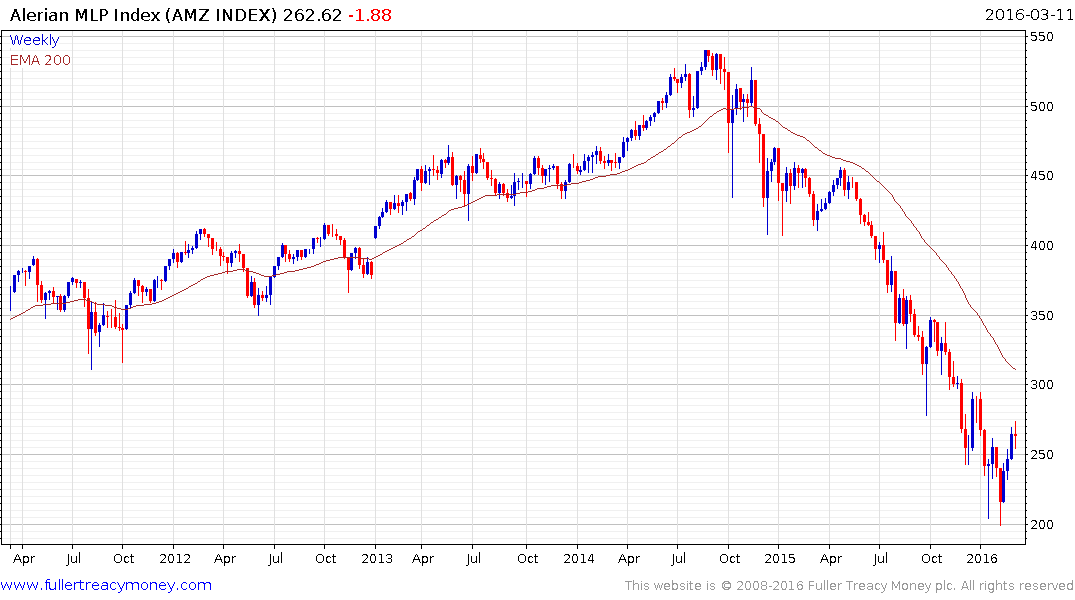 The Alerian MLP Index dropped more than 60% from its August 2014 peak to the February low near 200 and has since bounced to challenge the 18-month progression of lower rally highs. It firmed today from the region of 250 to confirm the reversionary rally is still underway but will need to hold the short-term progression of higher reaction lows to demonstrate continued demand dominance. 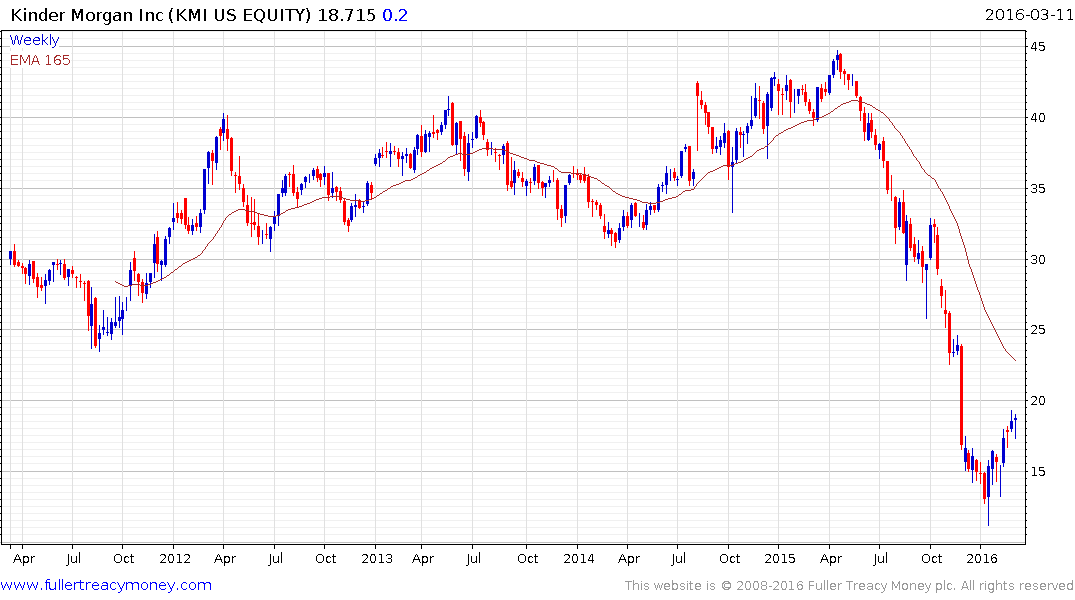 Kinder Morgan fell more and subsequently bounced higher, not least following the announcement of Berkshire Hathaway’s investment. It rallied today from the 17.50 area and a clear downward dynamic would be required to question potential for an additional unwinding of the overextension relative to the trend mean.  In the interests of full disclosure, I still hold the share in my spread-betting account.