Historically, LNG has been sold on long-term contracts that guaranteed buyers supply and helped producers finance liquefaction plants at a time when less of the product was shipped. Now, a gas glut is causing LNG importing countries to support renegotiating existing deals that can run 20 years or more while suppliers offer more flexible terms to lock up customers spoiled for choice.

India already is encouraging importers to rework long-term accords to better align costs with spot market prices. Japan, the world’s largest LNG importer, may soon join them. That country’s Fair Trade Commission is in the process of probing resale restrictions in longer deals in an effort that could mean the renegotiation of more than $600 billion in contracts and boost the number of shorter-term agreements.

“There will be 40 million to 50 million tons of homeless LNG by 2020, which can go anywhere or doesn’t have any fixed customers,” said Hiroki Sato, a senior executive vice president with Jera Co., a fuel buyer that plans to increase spot and short-term LNG deals. “Homeless LNG will provide a great opportunity to improve liquidity in Asian and global markets.”

The evolution of a global transportation network for natural gas is creating the impetus to divorce pricing from long-term oil contracts. While Russia floated the idea of creating a natural gas equivalent of OPEC a few years back, as a way of preserving it pricing power, it was unable to reach critical mass.

The reality today is that a substantial number of new entrants to the market, not least Australia, the USA and developing east Africa, all have a vested interest in capturing market share. Meanwhile major consumers like Japan, India and China would understandably like to avail of lower prices. The expansion of the Panama Canal also boosts the viability of US exports to Asia. 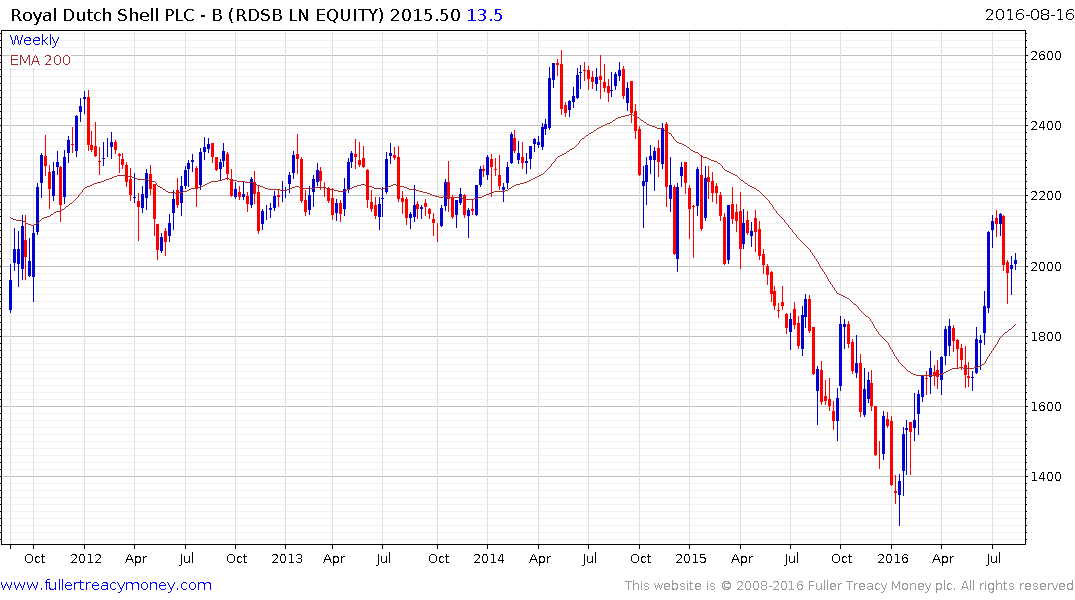 Royal Dutch Shell (Est P/E 26.3, DY 6.6%) has bet big on the growth of the global LNG market and the share has bounced from the region of the trend mean over the last couple of weeks. A sustained move below 1850p would be required to question medium-term scope for continued upside. 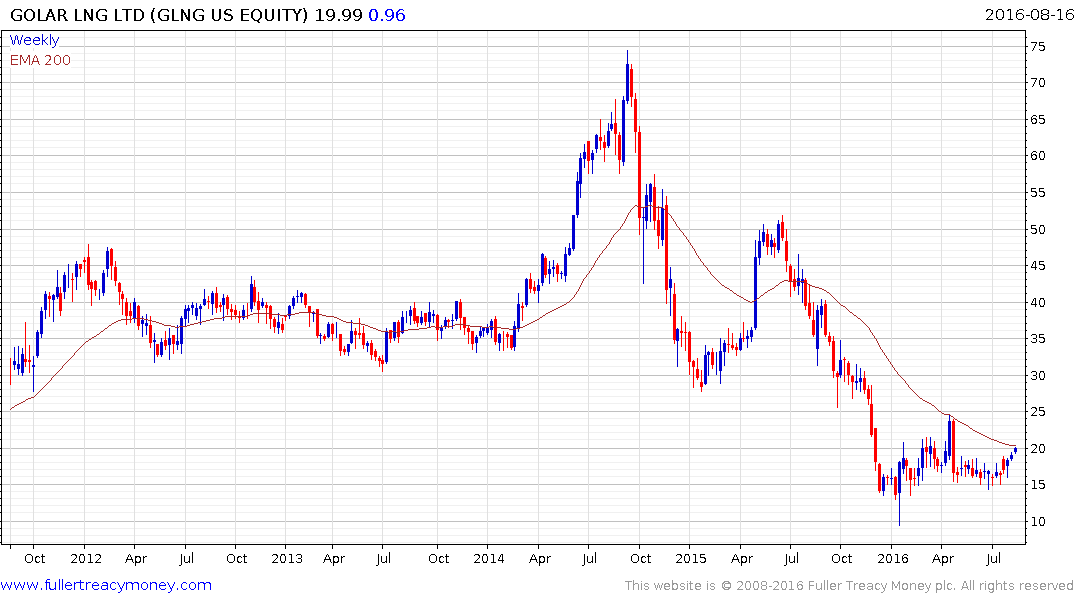 Golar LNG (Est P/E N/A, DY 1.01%) has one of the largest fleets of LNG carriers. The share collapsed between late 2014 and January but has been ranging in a support building phase since. It is now testing the region of the trend mean and a clear downward dynamic would be required to question potential for a successful breakout. 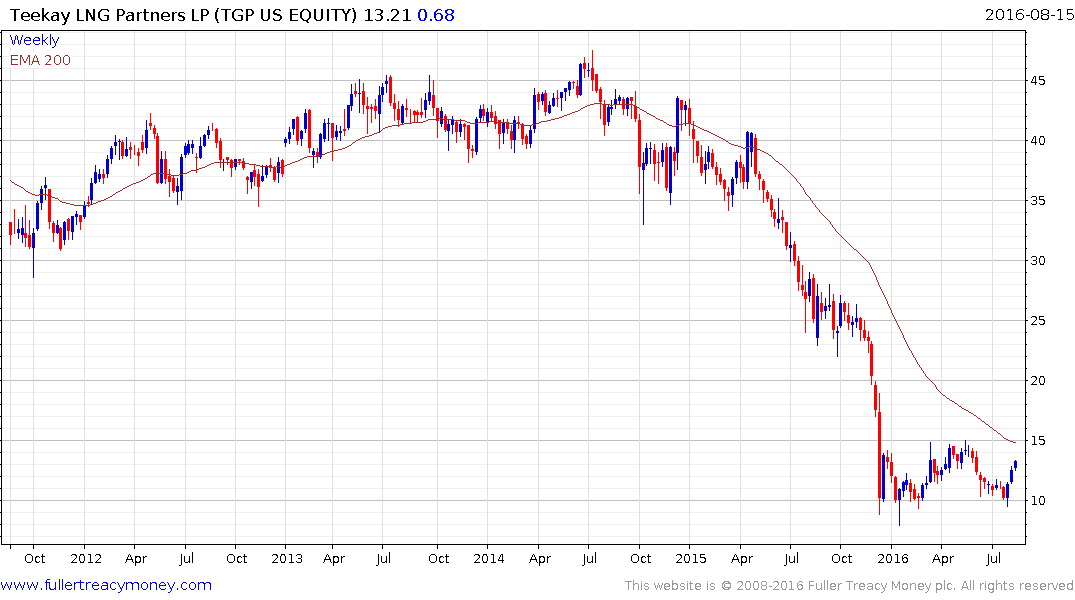 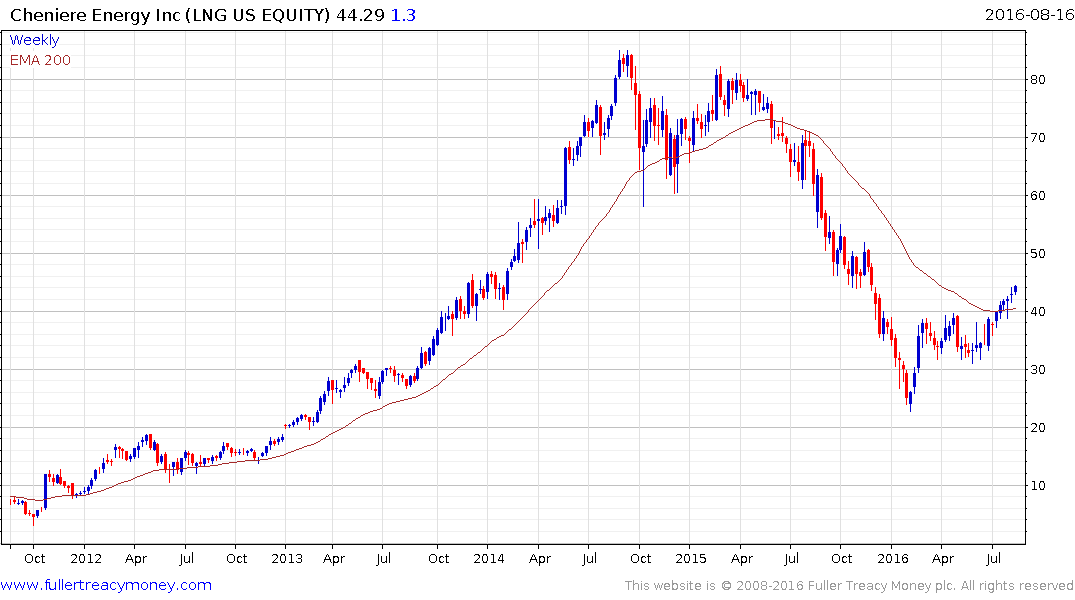 Cheniere Energy (Est P/E N/A, DY N/A) operates the Sabine Pass LNG receiving and export terminal in Louisiana. The share hit a medium-term low in February, broke out of a four-month range in early July and continues to extend the breakout. A sustained move back below $40 would be required to question recovery potential.