Email of the day on MLPs
Comment of the Day

Email of the day on MLPs by Eoin Treacy

I wonder if one of you can be tempted to have a look at some charts of the more successful Master Limited Partnership?  In particular ETE, MMP and TRGP have had rivetingly consistent charts for a number of years, and they have been my main money spinners recently. However they are doing so well that I have now got out of them fearing a pullback, but (as always with a bull market) wondering whether hanging on to a good thing would not have been best.

These three are either General Partners or (MMP) have no General Partner, which partly explains why their growth is so high, as I understand that a GP is in a way a leveraged play on the underlying LP.  But their charts are much more consistent than those of their LPs and indeed than those of most other MLPs.  The whole sector (AMJ) has also had an explosion recently, which does make me think the trend is actually likely to continue.

Thank you for this informative email and question of general interest to the Collective. Pipeline MLPs have been among the greatest beneficiaries of the boom in US unconventional oil and gas production, not least because regardless of how profitable the drilling operation is, the product still needs to reach market. As volumes increased, so have the shares of the related MLPs. The companies’ attractive dividend streaming characteristics have been additionally compelling in what has been a low yield environment. 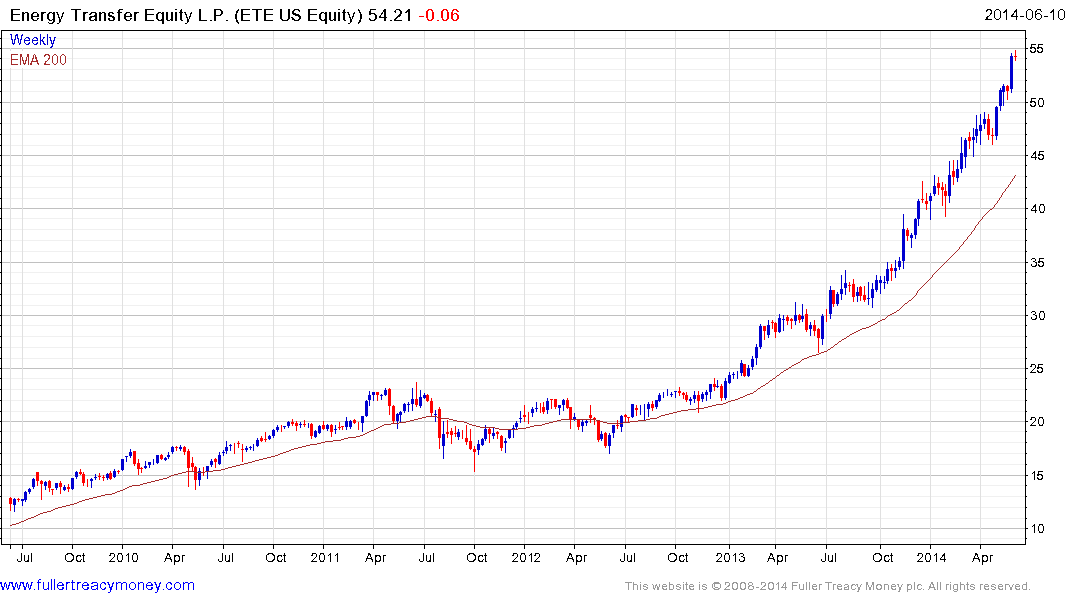 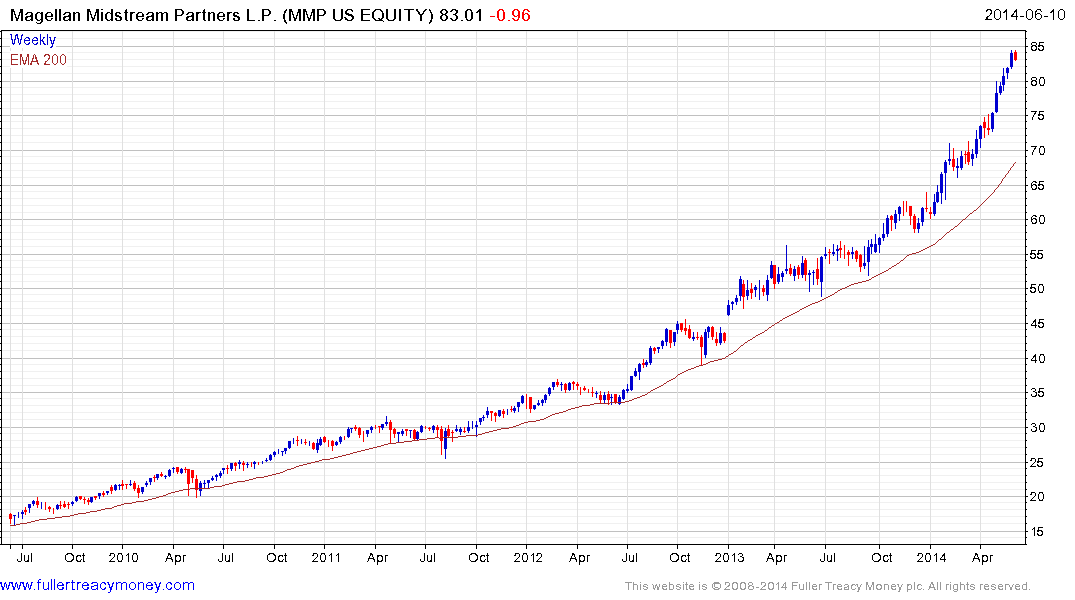 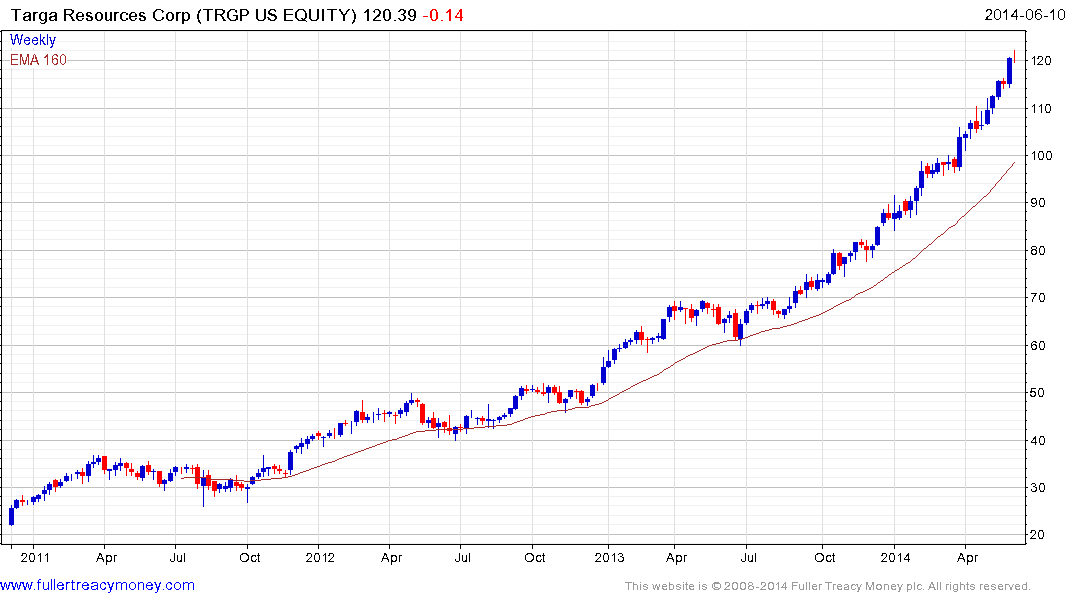 These positive aspects have contributed to consistent trends for Energy Transfer Equity LP, Magellan Midstream LP and Targa Resources Corp which, as you point out, have picked up pace over the last couple of months. We do not know how long investors will be willing to pay progressively more for these instruments. On the one hand dividends have been growing at more than 15% per annum, on the other yields have compressed and valuations have increased.

At The Chart Seminar we define acceleration as a trend ending characteristic but do not yet have evidence that the advance has been exhausted. It is for this reason we advocate a trailing stop as the best strategy is such circumstances. It will ensure you stay with the instrument as long as prices continue to rise and you will exit when they experience a larger than normal reaction. Reactions over the last six months have been relatively shallow so a trailing stop would not need to be particularly far from the current price. 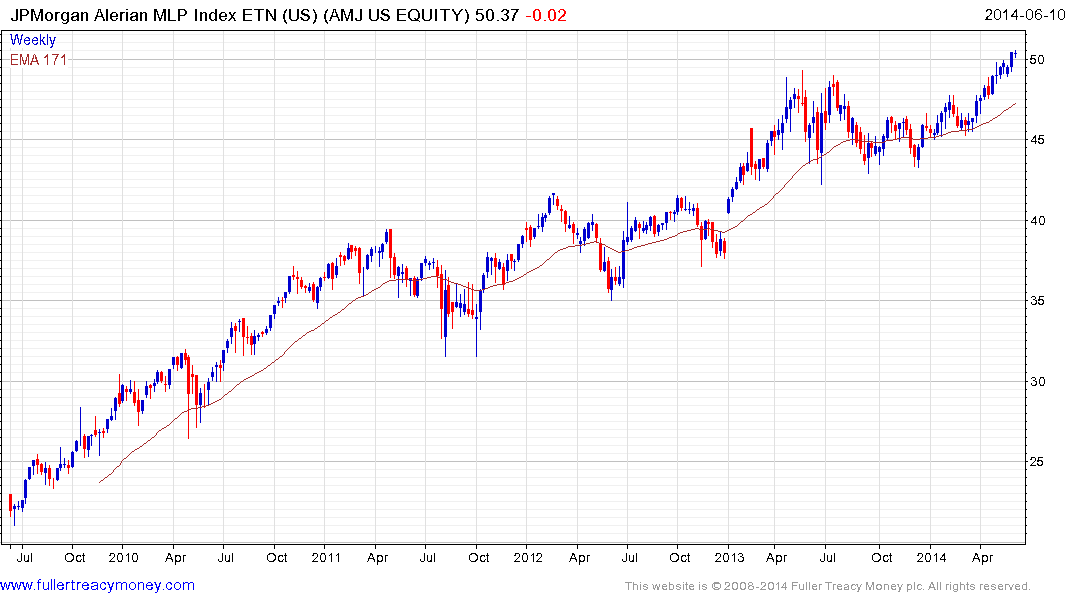 The JPMorgan Alerian MLP Index ETN broke out to new highs in May, probably more because its weaker constituents stopped falling, rather than the specific strength of its stronger members. (Also see Comment of the Day on June 5th.)