Supply discipline is the only resort, but looks difficult to achieve
Another 518k TEU of mega vessels will hit the water in 2016 (with 800k more in both 2017 and 2018), which will force Asia-Europe capacity to grow c.10% in 2016 (vs. est.2% demand growth). Liners’ supply discipline has also become increasingly difficult to achieve, given the widening cost gap. While the latest mergers (Coscon+CSCL; CMA CGM+NOL) should further consolidate market share, pricing competition typically intensifies post mergers, based on prior experiences. This is due to liners seeking to preserve market share while cargo owners seek to diversify their risks. Moreover, the existing alliances are set to break up post mergers, creating short-term instability for the industry.

How deep and long will this downturn last?
The sector has traded down to 1.0x P/B, vs. 2016E ROE of -19%, which still looks expensive. During the GFC, the sector troughed at 0.5x P/B vs. ROE of -20%. More importantly, investor interest has waned over the past several years as the sector’s oversupply was widely expected to persist. This explains why the sector’s P/B range has not only moved down but also contracted. We expect a prolonged downcycle; hence, value will only emerge when P/B is closer to the GFC trough of 0.5x.

Bull markets begin when new sources of demand emerge amid an environment where supply is constrained. Likewise they peak when supply has caught up and overwhelms demand. We occasionally get periods of time when demand falls but then prices retreat enough to encourage consumers to participate again. As a result supply is a more important factor than demand when thinking about how a market is likely to evolve. Bearing that in mind it has often puzzled me why people tend to think about the Baltic Dry Index as being an indicator of demand rather than supply; since that kind of interpretation is contrary to how we tend to look at just about every other commodity related market. 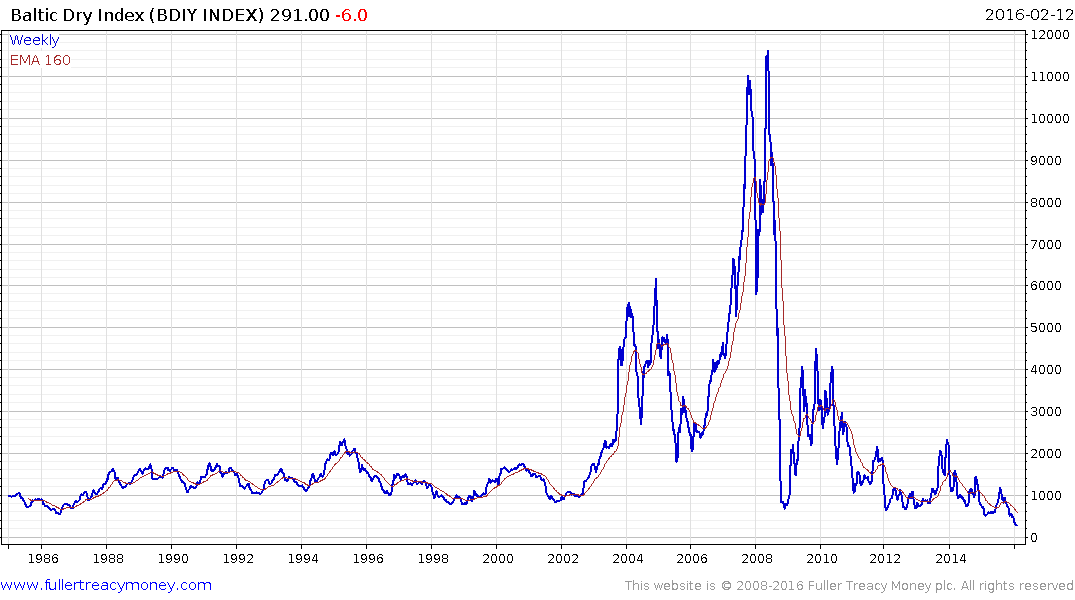 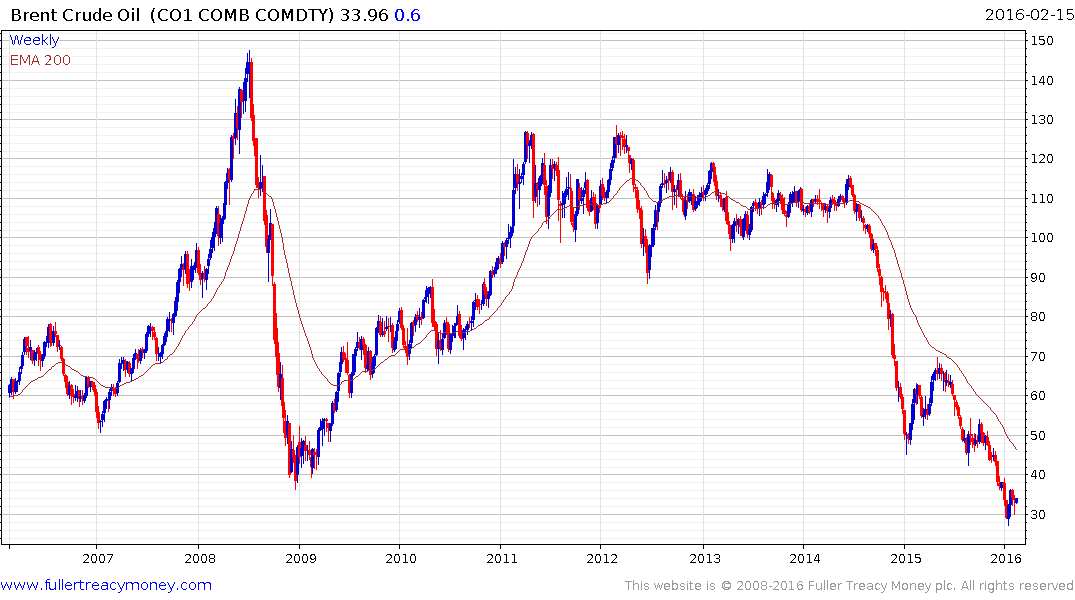 It’s a potentially important time to think about these kinds of questions because with oil prices now a fraction of where they were a year ago and the Baltic Dry Index posting new 35-year lows the temptation is to conclude we are entering a global contraction. Let’s back up, do these charts tell us more about the respective supply or demand for oil and shipping capacity? After a decade long bull market supply of both oil and ships have increased substantially and the demand growth numbers that were used to justify spending on expansion are now working out. However low prices encourage additional demand into the market and the case for new entrants becomes more compelling the lower supply goes. It is for this reason we hear central banks saying they expect deflationary fears to be transitory.
The same subscriber who sent the above report also attached the following comment:

While I have heavily invested and bullish on liquids transport, I can't help but wonder, with everyone who knows it best now hating it, if it's time for a turn in containers and / or Dry Bulk.

The news gets worse and worse but bunker fuel gets cheaper and cheaper. I believe fuel cost is covered by lessor and not in contract - but - I am convinced that the financial community is mistaking the most massive fund redemptions in investment history for a market crash based on economic fundamentals.

Economic numbers mostly look ok. China's economy is double the size of 5 years ago and triple the size of 15 years ago. Simple math will tell you that a 5% expansion from a much higher starting point means the need for more "stuff" than an 8% growth rate from 1/2.
On a separate topic ------

Every market move, from credit spreads to EM equities, can be explained by $400 billion leaving various fund strategies.

If you have forced selling in high yield or high grade makes no difference if there is not a bid from a trading desk. Global banks can no longer keep inventory and that leaves an entire world without a bid.

Like leftism everywhere throughout history- the best sounding ideas meant with the best of intentions blow up in your face when you have no comprehension of cause and effect.
Being on the left, because you care so much, means never having to say you are sorry. It started with forcing mortgage providers to give loans to people who had no means to pay it back in the name of equality. Now, it ends with rules in place to keep greedy bankers from making too much money.  We've gone from a world awash in liquidity to a world starving for a bid. When Saudi, UAE, Norway etc are forced sellers - to pay for social programs they can no longer afford - do I want to be the bid - or do I want to wait for zero?

Forced selling by Sovereign wealth funds is a major consideration right now but as you say the contagion this has created, evidenced in the commonality across regions and asset classes, will create favourable entry opportunities for investors. 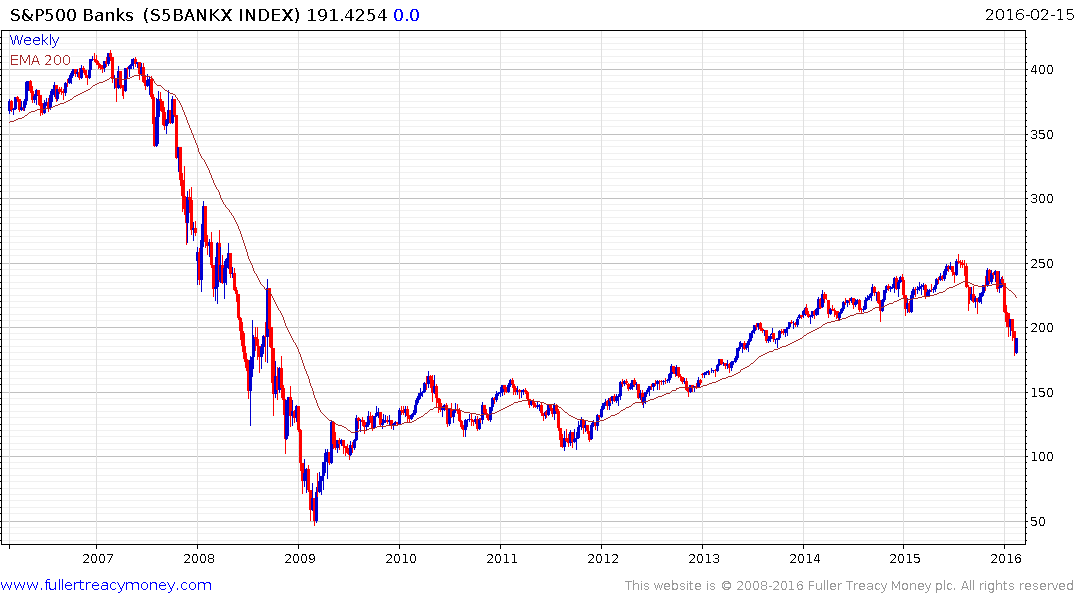 The issues you mention with regard to the inability of the banking sector to participate as market makers, particularly in the fixed income markets is an issue that is certainly contributing to the widening of credit spreads. Right now short-term oversold conditions are being unwound, while the issues facing the banking sector, not least in a negative interest rate environment remain medium-term headwinds.