China Has Already Declared Cold War on the U.S
Comment of the Day

China Has Already Declared Cold War on the U.S by Eoin Treacy

Yet the book that has done the most to educate me about how China views America and the world today is, as I said, not a political text, but a work of science fiction. "The Dark Forest" was Liu Cixin’s 2008 sequel to the hugely successful "Three-Body Problem." It would be hard to overstate Liu’s influence in contemporary China: He is revered by the Shenzhen and Hangzhou tech companies, and was officially endorsed as one of the faces of 21st-century Chinese creativity by none other than … Wang Huning.

"The Dark Forest," which continues the story of the invasion of Earth by the ruthless and technologically superior Trisolarans, introduces Liu’s three axioms of “cosmic sociology.”

First, “Survival is the primary need of civilization.” Second, “Civilization continuously grows and expands, but the total matter in the universe remains constant.” Third, “chains of suspicion” and the risk of a “technological explosion” in another civilization mean that in space there can only be the law of the jungle. In the words of the book’s hero, Luo Ji: The universe is a dark forest. Every civilization is an armed hunter stalking through the trees like a ghost … trying to tread without sound … The hunter has to be careful, because everywhere in the forest are stealthy hunters like him. If he finds other life — another hunter, an angel or a demon, a delicate infant or a tottering old man, a fairy or a demigod — there’s only one thing he can do: open fire and eliminate them.

In this forest, hell is other people … any life that exposes its own existence will be swiftly wiped out. Kissinger is often thought of (in my view, wrongly) as the supreme American exponent of Realpolitik. But this is something much harsher than realism. This is intergalactic Darwinism.

Of course, you may say, it’s just sci-fi. Yes, but "The Dark Forest" gives us an insight into something we think too little about: how Xi’s China thinks. It’s not up to us whether or not we have a Cold War with China, if China has already declared Cold War on us.

The Three Body Problem is an excellent read and The Dark Forest follows on well from where it left off. The third book in the series, Death’s End, was too meandering for me and I did not finish reading it. For a non-Chinese reader, the names can be a bit of an obstacle but the story is compelling.

In many respects the narrative follows the curve of Orson Scott Card’s thinking in plotting out how two species come into conflict and lack a way of adequately communicating. The obvious parallels with China’s desire for equivalency and/or supremacy on the global stage, despite a very different administrative system is obvious.

The law of the jungle thought experiment harks back to the calculus of nuclear war. The existence of a sufficient deterrent ensures a war will not occur. The obvious conclusion is that any country has a clear incentive to use a weapon that overrides the deterrent as soon as it comes into their possession because they have no idea what the opposing side will do if they were in the same situation. Therefore, anyone who thinks that the new Cold War will be limited to technological competition is expressing wild-eyed enthusiasm. The race is on to develop a successful countermeasure to ICBMs. That is the ultimate aim of investing in artificial intelligence, quantum computing, nationalism in chip manufacturing, hypersonic travel and the proliferation of commercial space travel.

A subscriber left this comment on a piece I wrote last week:

I would add that China's recent aggressive actions coincide with the US government's geo-strategic blunders. Xi Jinping and Co have come to the conclusion that the US policy is more bark than bite and that Trump is a president with feet of clay.

China has promulgated the view that the USA is a “paper tiger” for decades. However, the accession of the country into the WTO without enforcement or monitoring of trade conditions confirmed the view. Xi Jinping’s ascension to the Presidency marked a major transition from covert to overt global aspirations.

Decoupling from reliance on China’s massive manufacturing hub and deep pockets is not going to happen overnight. There are too many interdependencies for that. The process underway now might be clumsy at best, but there is a clear destination in mind. Independence from reliance on China is the goal, in just the same way that China is already well on the way to achieving independence from the West.

SMIC’s IPO in Shanghai this week is a clear example of how willing the Communist Party is to plough money into its domestic chip manufacturing sector. The company might never make a profit, but that is largely irrelevant given government support.

Boom Supersonic’s announcement today that they have completed construction of their supersonic test plane with an October 7th test flight planned, highlights how the private sector is delivering on faster than sound travel. The UK’s Reaction Engines is also well on the way to delivering its Synergetic Air Breathing Rocket Engine (SABRE) which will be capable of Mach 5 speeds. Once brought to market, in the next few years, it will greatly enhance scope for lift costs to space, to compress even further. Meanwhile I continue to monitor news stories about UFOs which are at least an attempt to sway opinions of what is possible on the fringes of military technology. 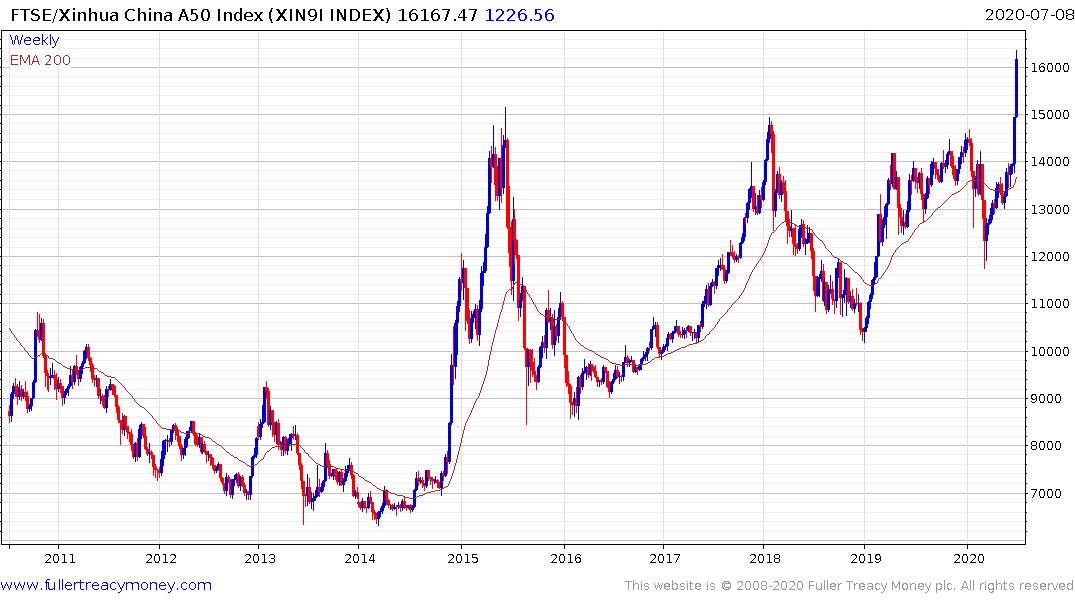 The continued strong performance of Chinese stocks is also part of a wider policy toolkit to demonstrate China’s ability to turn a bad situation into a triumph.