Bottom is in for Uranium; Gold & Silver Off to the Races in 2017
Comment of the Day

Bottom is in for Uranium; Gold & Silver Off to the Races in 2017 by Eoin Treacy

Kazatomprom that it plans to cut its annual uranium production by 10%, or by 5.2M lbs U3O8. This amount translates into roughly 3% of 2015 global production and marks an inflection point in the space. Since at least 2001, Kazatomprom has relentlessly increased production into an oversupplied market and is arguably the single biggest cause for the weakness in the commodity aside from the Fukushima disaster. In fact, we had long since given up on expecting Kazatomprom to exercise production restraint as its mines were the lowest cost operators in the world and constant production increases appeared to be a cultural focus in Kazakhstan.

While some skepticism exists on whether Kazatomprom will actually follow through with this cut (as opposed to OPEC style “cuts”), we suspect that at least some of the production reduction will occur among joint venture operations managed by western producers such as Cameco. Moreover, we believe the impact will be more than the announced cut amount because the market was likely factoring in a typical Kazatomprom increase as opposed to a cut. So instead of a 3-5% increase we are expecting a reduction of 10%, or a 13-15 percentage point swing.

Cameco’s announcement of Tokyo Electric Power Holdings’ (“TEPCO”) termination of its supply contract has cast some concern over what will happen with the U3O8 pounds that were earmarked for the Japanese utility. In total, the contract was for 9.3M lbs U3O8 to be delivered from 2017-2028, this works out to 775,000 lbs annually. TEPCO was selling some if not all of the material it was contractually obligated to purchase already. As such, we believe the worst case scenario arising from the cancellation is that Cameco does the exact same thing and sells the material into the spot market. However, we think there is room for potential positivity from this announcement, as Cameco could instead elect to not produce the pounds at all (and further cut costs by doing so) or it could elect to store them in inventory to await higher prices. Either of those two actions would effectively be removing some of the excess supply in the market.

Kazakhstan stamped its dominance on uranium market by engineering a multi-year decline and succeeded in driving a significant number of small explorers out of business.  Last week’s news Tokyo Electric cancelled a major Cameco contract highlights just how successful their policy of flooding the market with supply has been. Having achieve their goal, the decision to limit supply is an important catalyst for the uranium market.

The uranium price has now pushed back above the trend mean and a clear downward dynamic would be required to check the momentum beyond a brief pause. 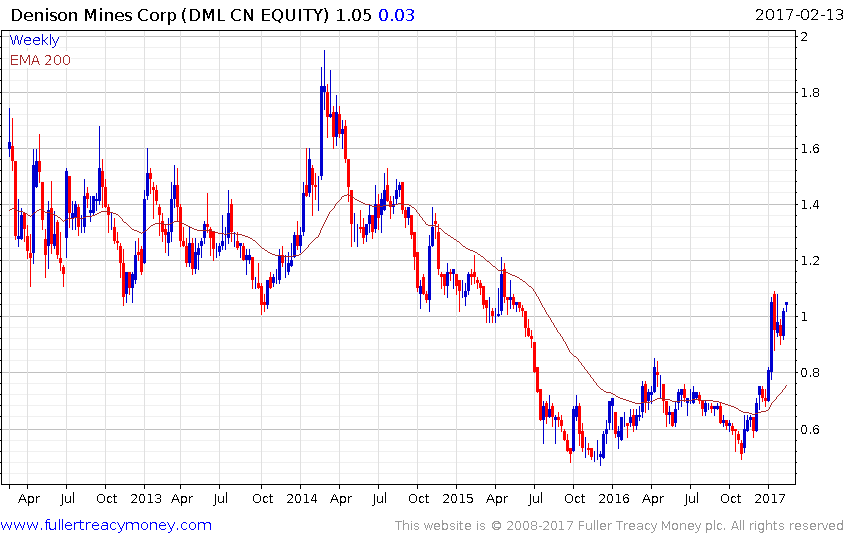 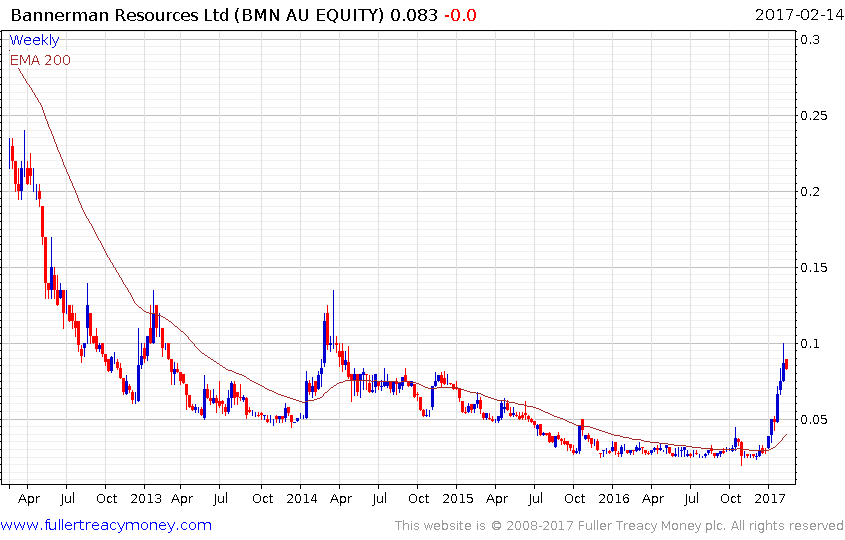 Here is a link to the uranium miners section of the Chart Library where a great deal of variability is still evident in the performance of the sector suggesting a significant number of companies are still trading in a difficult environment. 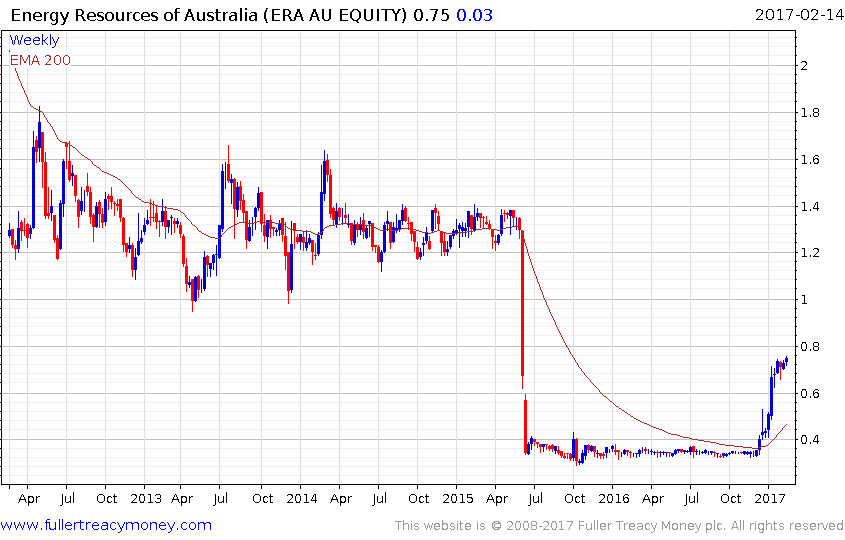 Energy Resources of Australia has doubled since late last year.