President Donald Trump and senior White House officials have said a payroll tax cut, liability reform, tax incentives for businesses to adapt to the pandemic and a potential back-to-work bonus are priorities for the administration.

Short said the White House views liability protections as “essential” for companies to bring workers back and fully re-open the economy.

The administration wants to be sure it’s “striking the right balance between income replacement on the one hand, and ensuring that we don’t have excessively high implicit tax rates on the return to work, on the other hand,” Tyler Goodspeed, acting chairman of the president’s Council of Economic Advisers, said in a separate interview with Bloomberg Radio.

Implicit tax rates can’t exceed 100%, he said, meaning it can’t be more lucrative for workers to stay at home. But any plan will require “not allowing a big blow to household income,” which is core to the economy, Goodspeed added.

Ohio Republican Brad Wenstrup, a member of the House’s tax-writing committee, said the package should address the ability of working parents to find childcare and helping schools to reopen.

“We have a shortage of day care providers,” he said in another Bloomberg Radio interview. “I am going to look for incentives for those type of programs.”

Congress in March passed a $2.2 trillion pandemic relief program, with carve-outs for small businesses and the airline industry as well as multiple lending programs for corporations and Main Street businesses through the Federal Reserve. Treasury Secretary Steven Mnuchin sent out nearly $1 trillion in the first month after that bill became law, through checks directly to American families, forgivable loans to companies and unemployment insurance.

Still, much of that money remains unused. The Treasury Department has yet to disburse any loans from a $25 billion pool for airlines, and most of a $17 billion carve-out for firms deemed critical to national security remains untapped.

The idiosyncrasy of how data sets are reported means the rebound in economic activity probably looks better than it is. If an historic decline occurs it will necessarily result in a deep decline. If the rebound from that low is in the order of 10% it will come through as an historic percentage advance and yet the absolute level of activity may still be well below the peak.

The global economy is still struggling to recover even as lockdowns ease sporadically around the world. Domestic demand is sustaining many economies but the outlook for international trade remains murky. That suggests there is a clear reliance on the promise of additional liquidity to sustain the recovery and support asset prices.

Many investors are waiting for the 2nd quarter earnings to come through before making a judgement call on whether to trust the rebound in stock markets. However, how much insight will they really deliver. Everybody knows April was a write off while May and June were better.

There was definitely some pent-up demand that was unleashed following the April hiatus, and not least because unemployed consumers were flush with additional benefits. The big question therefore is how are incomes going to be supplemented with millions and millions of people still unemployed. 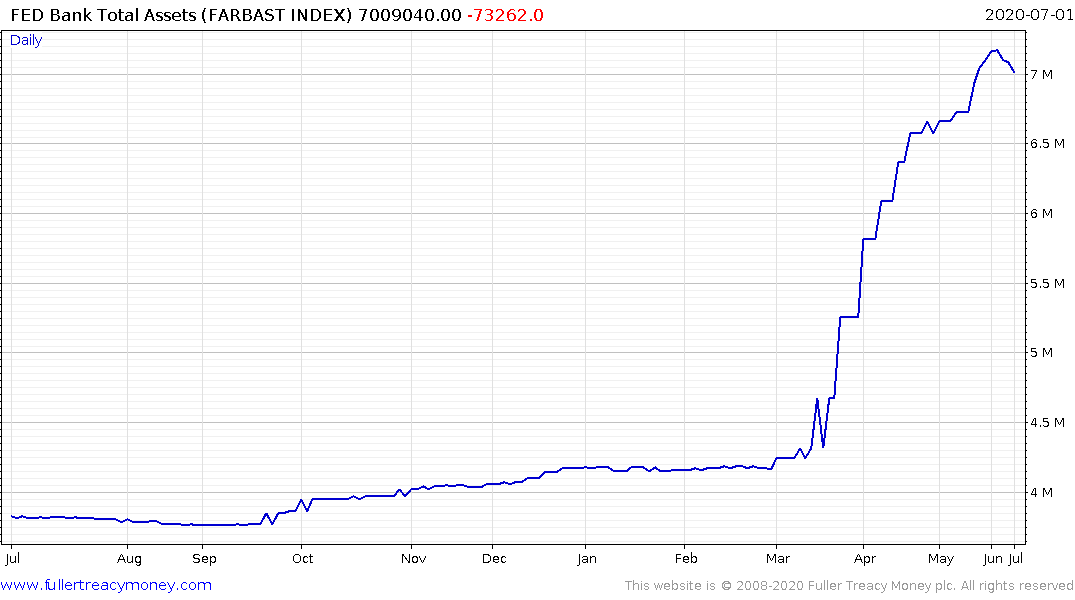 The sustainability of breakouts is completely dependent on additional liquidity. The Fed’s balance sheet contracted into the end of July but the total assets of global central banks increased. The weakness of the Dollar and the willingness of global central banks to print accounts for the difference but also helps to explain why stocks have remained firm. Without an additional stimulus announcement there is clear scope for an unwinding of short-term overbought conditions. 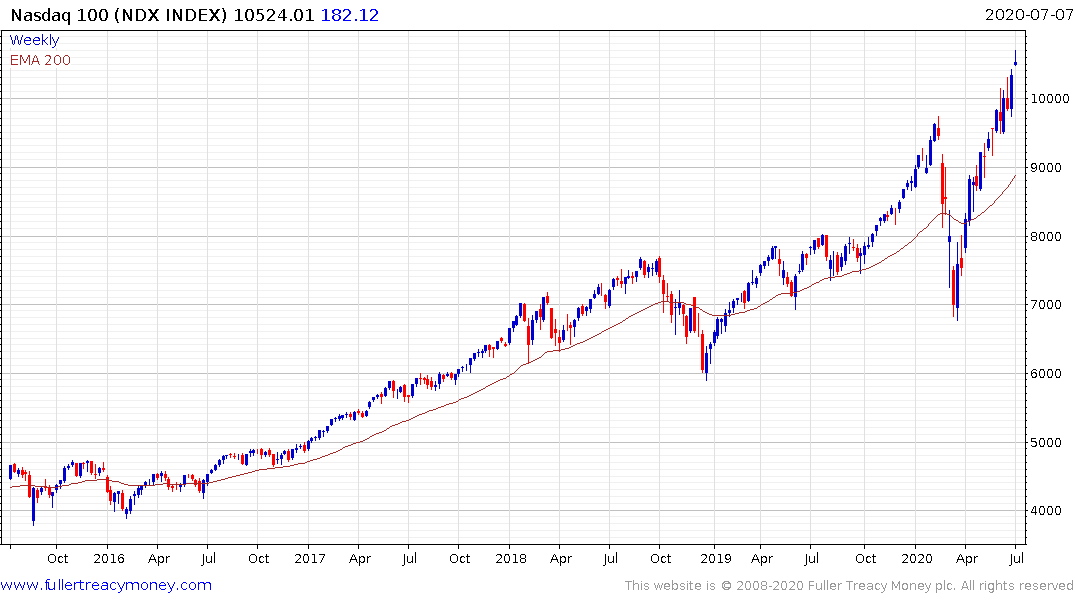 The Nasdaq-100 remains the clear leader and is short-term overbought. Meanwhile the Russell 2000 Index continues to trade below its trend mean. The slow near 1350 needs to hold the is the rebound from the March low is to remain consistent.