“Pretty much every client we talk to wants to buy the dip,” wrote Tobias Levkovich, Citigroup Inc.‘s chief U.S. equity strategist in a note. “And that is not comforting.”

The S&P 500 edged higher Thursday, extending the week’s gains to more than 3.5%, as the Stoxx Europe 600 Index climbed to a record and stocks soared in Asia. A gauge of European credit risk hit its lowest since 2007.

Yet the battle against the virus could suffer a setback as factories reopen in China in the coming days and more people come into contact with each other. On the other hand, if factories fail to reopen, the economic impact could prove much more severe.

At Robeco, money manager Jeroen Blokland is eyeing the rally warily. The head of multi-asset funds at the Rotterdam-based firm recently cut an overweight allocation to stocks to neutral because of the spread of coronavirus. He says it’s not yet time to dive back in.

“Every investor is looking for the bottom and wants to find it a little bit earlier than his neighbor,” he said. “We need a little bit more confirmation that the outbreak will be contained before moving again.”

The stock market responds to liquidity because that has an influence on all asset prices and regardless of other short-term factors the Treasury yield is below that of the S&P500 which is generally supportive of the buy the dip strategy. Nevertheless, the stresses coming to bear as a result of the Wuhan Acute Respiratory Syndrome (WARS) are significant and need to be taken seriously.

The majority of Chinese factories close down for Chinese New Year, so while some believe it was an inopportune time for a quarantine, from a business perspective, it was probably the best time. Generally speaking, it is a time when people look for better opportunities and to take up job offers elsewhere. That means many factories experience a high turnover of workers in the first couple of weeks after the New Year holiday and don’t really get back to work until about the third week.

This year’s holiday was somewhat longer than usual but delays so far are likely to be manageable provided people turn up for work on Monday. That’s not a given and since travel across China has been restricted by the virus many factories in coastal areas will have difficulty sourcing workers. A friend in the garment industry who buy fabric from China was feeling anxious but not desperate when he related this to me last night. In South Korea, Hyundai has halted production because of a lack of parts.

Mrs. Treacy’s business will run out of inventory by May based on the trajectory of sales if she cannot place an order within the next month. The easy answer therefore is to raise prices to at least temporarily dampen demand, in order to ensure inventory last longer and Amazon Choice badge designations are retained. She also got emails from pearl farms in Japan last night asking if she would be willing to visit them rather than they travel to the Hong Kong show in May.

Meanwhile Chinese companies are declaring force majeure on LNG imports, using the virus as an excuse. The question overhanging this practice is whether they are taking advantage of the situation because spot prices are so low relative to long-term supply contracts.

The takeaway here is that right now the economic impact of the virus is manageable but the longer it persists the greater the impact will be. Everyone assumes that the economic hit and recovery will follow the short sharp but temporary trajectory of SARS. However, WARS appears to be much more communicable and up to thirty times deadlier than the seasonal flu. SARS was pretty much contained within the hospital setting and the majority of dead were people in close proximity to those infected. That is not the case with WARS. 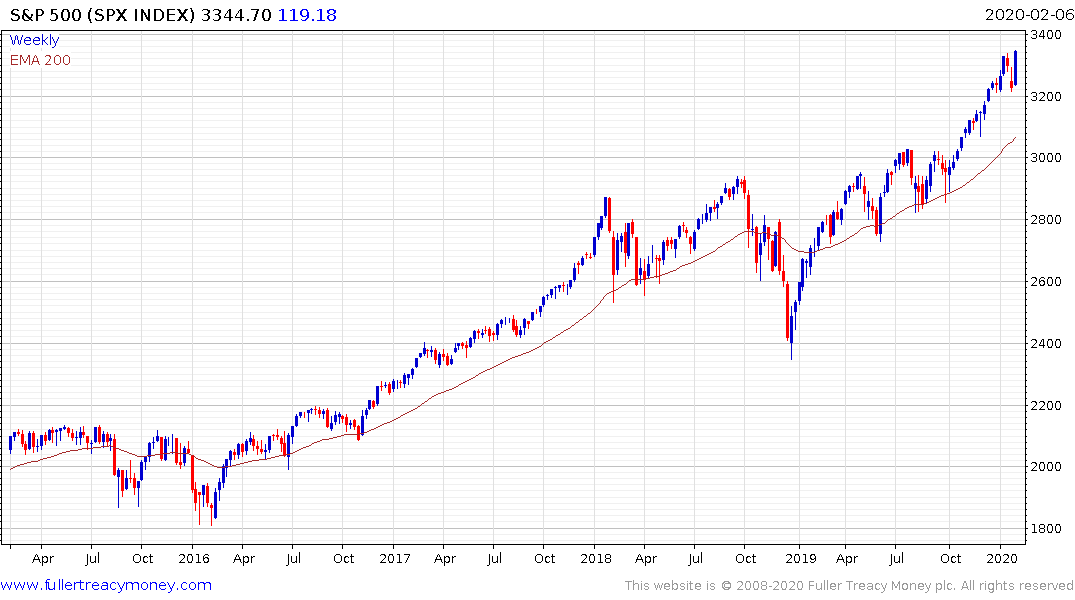 Continued monetary and fiscal stimulus is more important than ever and inflation is the wild card the bond market gives no credence to.