The Trump administration isn’t alone in trying to fast-track a vaccine. One of the world’s most promising vaccine candidates has been developed by a team at Oxford University in London. Last month, scientists at the U.S. National Institutes of Health innoculated six rhesus macaques with the Oxford vaccine and then exposed them to the coronavirus, the New York Times reported.

All six were healthy more than four weeks later, according to the Times. The researchers are currently testing their vaccine in 1,000 patients and plan to expand to stage two and three clinical trials next month involving about 5,000 more people.

The Oxford group told the Times they could have several million doses of their vaccine produced and approved by regulators as early as September.

In the U.S., the Bill & Melinda Gates Foundation has meanwhile shifted much of its research effort to the coronavirus virus.

A broadly held assumption is we are going to have a second wave of infections like in 1918 later this year. China’s statement yesterday that they believe it will become seasonal is also feeding the belief that a solution will not be forthcoming in the short term. However, in much the same way that war efforts accelerate the pace of innovation, on a needs-must basis, we are seeing the same thing with the development of treatments for COVID-19.

There are currently 70 different candidates in the testing phase and limitless resources will be applied to the problem until one is found that works. I remain strongly of the opinion that a repeat of the 2018 second, larger, wave is unlikely.

This is about the most important judgement call in the market today because the stock market has rebounded impressively on the assumption a vaccine will be provided to healthcare workers by the third quarter. 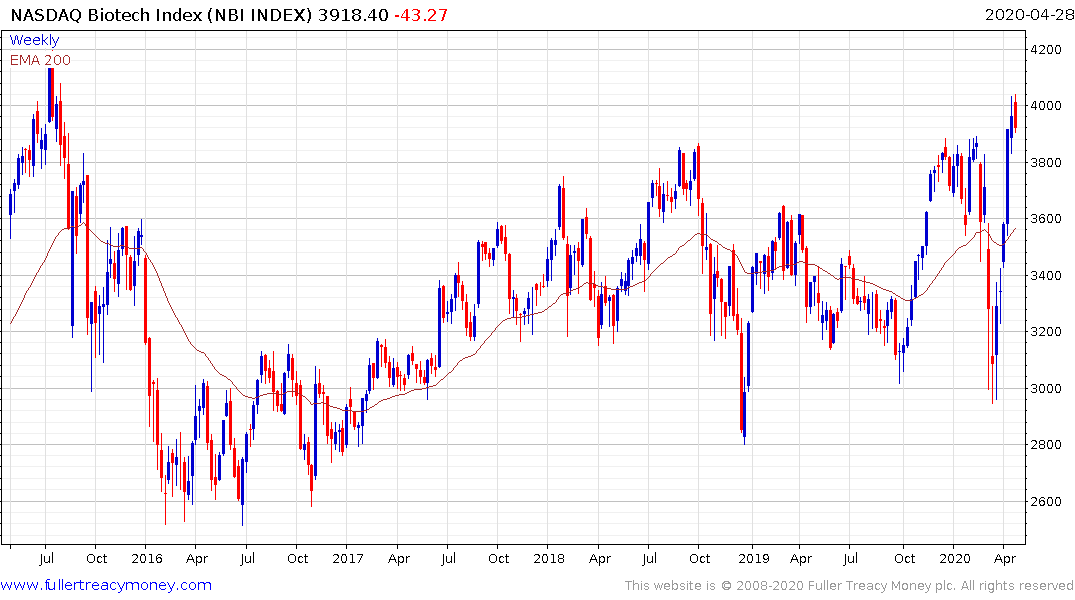 The 2nd order thought to this spending and deregulation blitz is that it will offer an accelerated path to commercialisation for a large number of biotechnology companies. The Nasdaq Biotech Index is back testing its 2015 peak and while overbought in the very short-term, a sustained move below the trend mean would be required to question potential for additional upside over the medium term.