The board is also a testing ground for regulators, who have waived rules on valuations and debut-day price limits for the first time since 2014. The venue is the only one in China to welcome companies that have yet to make a profit, as well as shares with unequal voting rights. The Shanghai stock exchange will create an index tracking the firms about two weeks after the 30th listing starts trading.

Shares on the Star board have no daily price limits for the first five trading days, followed by a 20% cap in either direction. To limit volatility, the venue suspends activity for 10 minutes if a stock moves by 30% and then 60% from the opening price in the first five trading days, a wider band than the rest of the stock market. Only certain qualified foreign investors can buy the stocks directly, as there’s no access through trading links with Hong Kong.

The first batch of listings included China Railway Signal & Communication Corporation Ltd., whose Hong Kong shares sank on huge volume as traders switched into the A shares. Advanced Micro-Fabrication Equipment Inc., which was the most expensive listing of the batch, jumped as much as 331%. Its 171 multiple compared with an average of 53 times for the group, and 33 for similar stocks on other Chinese venues.

Despite the hype, there are questions about whether the excitement will give way to the lukewarm sentiment that’s blanketing the world’s second-largest equity market. On the other hand, a sustained period of ultra-high demand risks draining funds from other exchanges, where volumes are shrinking. The Shanghai Composite Index fell 1.3% on Monday, while the ChiNext Index was down 1.7%.

There is no doubt China can stage manage product launches and a stock market venue is no different. The question of whether the STAR market becomes the next Nasdaq is much thornier. It will be months before we have a clear idea of how much liquidity the venue can attract and perhaps more importantly whether that will simply siphon interest away from other markets or it will create organic growth in demand for speculative shares. 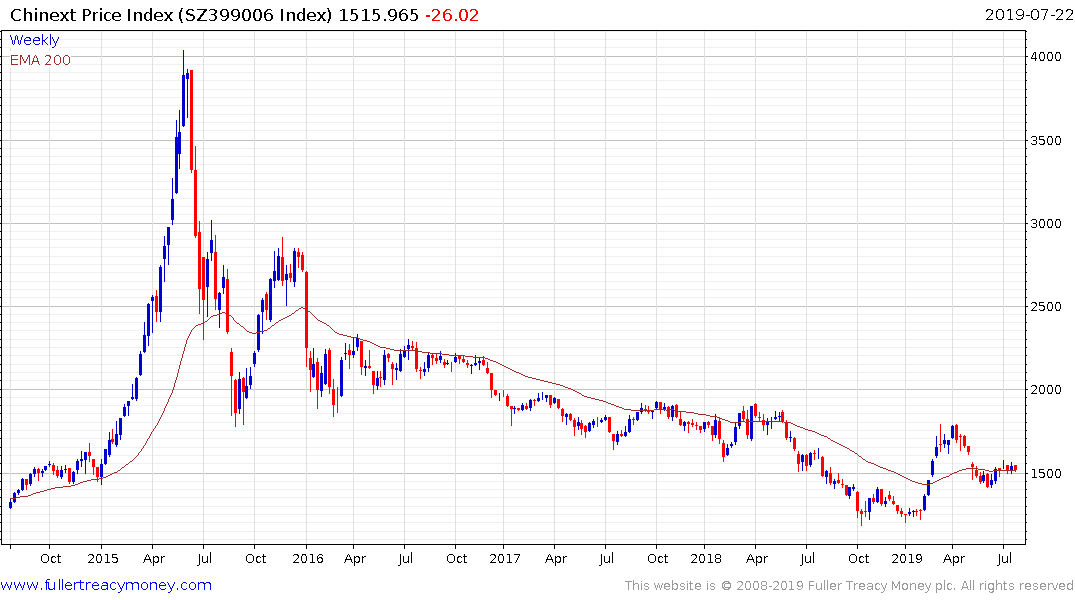 The ChiNext Index trended lower from its 2015 peak and rallied in February to break the sequence of lower rally highs. It is now in the region of the trend mean and will need to sustain a move above it to confirm a return to demand dominance beyond short-term steadying.

The bigger point is future breakout companies will likely be restricted from seeking financing abroad and may be forced to list domestically. So far, companies like Alibaba, Baidu and Tencent have had the defense that China’s markets are too restrictive and capital pool to shallow to sustain a domestic listing. With infrastructure being put in place at home, the logical next step will be to create the regulatory environment to ensure there are plenty of IPOs for the venue to sell.