The Last Straw? China Tries to Trash Single-Use Plastic
Comment of the Day

China will introduce new measures to aggressively cut back on its use of plastic, its first such move in more than a decade as booming e-commerce and food deliveries dramatically increase the country’s production of plastic waste.

In recent years, Beijing has stepped up efforts to reduce waste and pollution, introducing measures such as trash sorting and halting imports of recycling.

By the end of this year, nonbiodegradable plastic bags will be largely banned from major cities, and single-use straws will be prohibited in restaurants across the country, Beijing’s top economic-planning office and its Environment Ministry said on Sunday. The ban will extend to all cities and towns by 2022 and to markets selling fresh produce by 2025.

The spectacle of business titans fawning over Greta Thunberg and feigning concern at the issues she champions while simultaneously giving a warm welcome to President Trump is yet another example of the virtue signalling designed to impress electorates all over the world.

Nevertheless, there are some clear and substantive efforts underway to address environmental issues all over the world. Whether that is China’s efforts to reduce plastic consumption or efforts to champion electric and hydrogen technology. The promise of developing methods of providing the energy required for these technologies without resorting to coal burning is where the true challenge lies.

The desire to reduce plastic waste is something everyone can get behind. At one of the mandatory parent meetings at my children’s school last night there was a presentation about recycling, separation of trash items and how much waste everyone is engaged in. This was not new news for anyone from Europe who has been separating waste for decades but it was being pitched as something everyone could do for the environment. 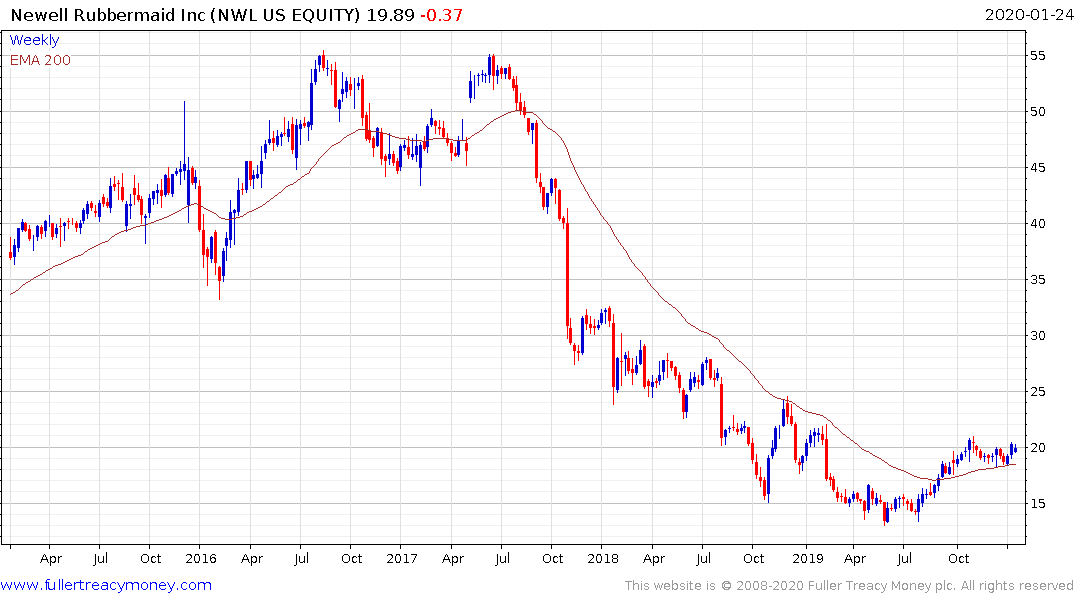 Newell Brands is one of the primary producers of reusable packaging. The share collapsed from its 2017 peak near $55 to a low in 2019 of $13.04. It rallied to break its downtrend in September and has been ranging above the trend mean for the last couple of months. It is currently steadying and a sustained move below $17.25 would be required to question recovery potential.