The enduring link between demography and inflation
Comment of the Day

The enduring link between demography and inflation by Eoin Treacy

Our paper builds on recent empirical work. Focusing exclusively on ageing, Anderson et al (2014), Yoon et al (2014) and Bobeica et al (2017) find significant deflationary effects from an increasing share of older population cohorts. Juselius and Takáts (2015) and Aksoy et al (2015) take the age structure more fully into account and find that an increase in the number of dependants, young and old, is generally inflationary. Juselius and Takáts (2015) also show that the deflationary effects of ageing found in previous studies are driven primarily by the very old (80+ year old) cohort. A common feature of these studies, as noted above, is that they rely exclusively on post-war data, which makes it difficult to separate the age structure effect in inflation from other global secular factors that may be related to trend inflation.

The uncovered link is policy-relevant, because global ageing will substantially increase the share of the old-age population in almost all countries (eg Goodhart et al (2015)). Increased longevity and stagnant or declining birth rates will affect both advanced and emerging economies. While slow, such large-scale demographic shifts have the potential to materially affect trend inflation. For instance, we find that accounting for the age structure leads to substantially lower estimates of endogenous inflation persistence. Hence, past historical periods of high inflation persistence might have reflected, in part, persistent demographic changes. This implies that the role of conventional endogenous drivers, such as inflation expectations, may have been overstated. If so, this could account for the current conundrum with well-anchored long-term inflation expectations and persistently low inflation rates. The stability of the relationship furthermore suggests that this may help us forecast longer-term inflation trends, as previously noted by McMillan and Baesel (1990) and Lindh and Malmberg (2000). Our estimates indicate that inflationary pressures are likely to rise in future due to the increasing share of older population cohorts and a declining share of younger ones, which has not been emphasized in the literature.

I found this a fascinating report not least because it runs contrary to the accepted view, right now, that inflation is not something we need concern ourselves with.

This raises the question of what might the potential catalysts might be for higher inflation. The formal adoption of Modern Monetary Theory practices certainly pops to mind because of its view that deficits don’t matter. 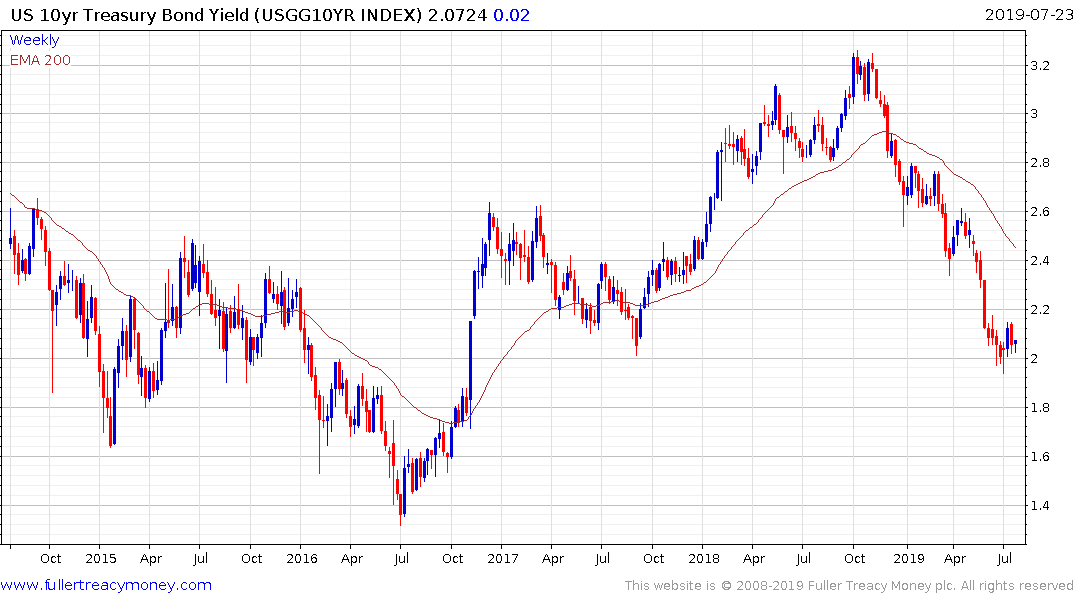 In the meantime, Treasury yields remain in a downward trend following the failed break above 3%.