The Swiss National Bank has followed an iconoclastic policy of investing directly in companies for much of the last decade. That makes a lot of sense since it helps to accrue positions in income producing real world assets which either pay dividends or retain income for further growth. They made significant purchases of US tech stocks about a decade ago and positions in gold mining shares today signal an appreciation for both value and thematic investing.

The policy of purchasing stocks contrasts with the practice of buying government bonds pursued by most other major central banks. It is worth considering that government paper represents little more than a promise to tax increasingly restive populations into oblivion. The alternative is currency debasement. By investing in stocks over bonds, a central bank benefits from a company’s ability to raise prices during inflationary cycles and to grow in low interest rate environments. 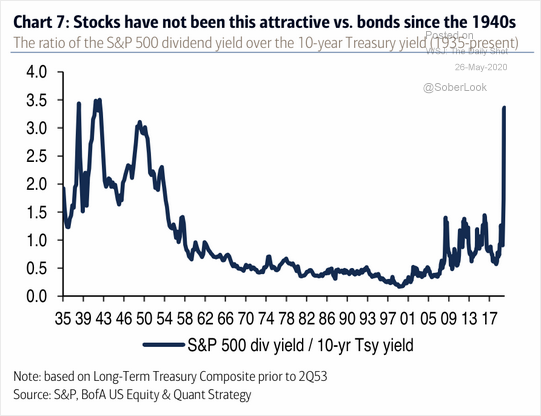 Then there is the additional point that stocks currently stand at their widest yield differential relative to bonds since the 1930s. Back then it was because stocks were deemed too risky, so investors demanded an additional yield premium. Today’s financial manipulation has compressed yields to such an extent that well capitalized companies are a beacon for yield hungry investors or all kinds. Therefore the greater risk resides in the bond market today.