The bitcoin price lost more than 10% in a matter of minutes yesterday evening, dropping to lows of $8,100 on the Luxembourg-based Bitstamp exchange before rebounding to settle around $8,600.

However, an outage on major U.S. bitcoin and crypto exchange Coinbase just after bitcoin's price plummet left many users unable to trade—the second time in less than a month Coinbase has buckled under stress.

"How many times do we have to say take your bitcoin off of Coinbase if you want to have access to it," Rachel Siegel, a bitcoin and cryptocurrency content creator, warned via Twitter, adding, "this is not the first time Coinbase has gone down and it surely will not be the last."

The challenge in an illiquid market is it is often much easier to buy than sell. That is particularly true when it comes to the cryptocurrency markets because transactions times are slow at the best of times. During a high-volume selling event exchanges are not equipped to deal with the volume. That’s not a bug, it’s a feature of the market.

News late last week that Paul Tudor Jones has 2% of his net worth in bitcoin helps to explain how the price successfully rallied from $4000 to $10000 since March. Therefore, one has to ask whether Sunday’s sell-off was a buy the rumour, to sell the news event ahead of the halvening which took place today. 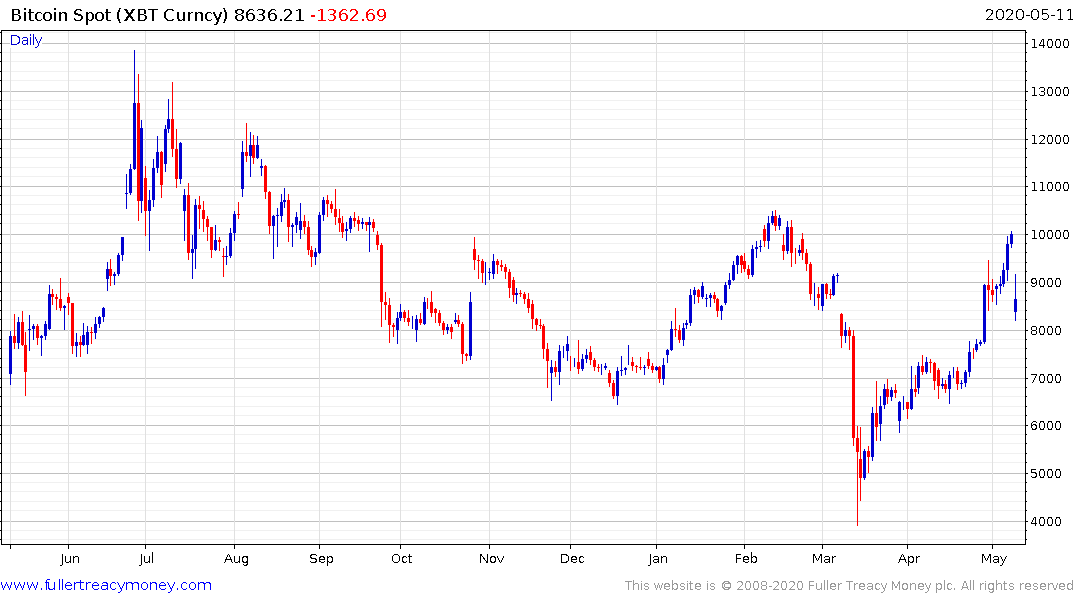 At a minimum, it was a bear raid. The big question now is how much of the advance will the price hold. It is now trading in the region of the trend mean but we need to see a clear upward dynamic to check the slide, while a sustained move above $10000 would confirm a return to medium-term demand dominance.

Here is a link to the Paul Tudor Jones report and here is a section which makes the case for simply relying on market behaviour to tell us what is going on.

One thing is for sure, there will be many assets that will move as a result of this money creation. So what is an investor to do? Traditional hedges like gold have done well, and we expect investors to continue to seek refuge in this safe asset. One thing I have learned over time is the best thing to do is let market price action guide your decision-making and then try to understand the fundamentals as they become more evident and comprehensible. Quite often, how the markets respond will be at odds with your priors. But remember, the P&L always wins in the long run. With that in mind, in a world that craves new safe assets, there may be a growing role for Bitcoin.