The number of euro-denominated junk bonds trading with a negative yield -- a status until recently associated with ultra-safe sovereign borrowers -- now stands at 14, according to data compiled by Bloomberg. At the start of the year there were none. Cheap money policies since the financial crisis have kept interest rates at, or near, all-time lows for the last decade.

That’s prompted many investors to buy riskier assets that yield enough for them to meet their liabilities, driving bond markets higher and yields lower. The European Central Bank said on Monday it’s ready to add more stimulus to the euro zone, indicating that an end to the age of ultra-low borrowing costs is far from over.

Wimbledon is on the TV and the air conditioning is humming so we are definitely in summer but negative yield on junk bonds suggest we are in silly season.

Negative yields on a sovereign can be at least partially justified by their appeal as safe havens. Junk bonds carry that moniker because of the unreliability of cash flows. It took me a while to corroborate the claims made in this article and while I could not find negative yielding bonds for all of the issuers there are definitely instances of junk bonds that have been bid up to these levels.

What is most interesting is the short maturities on some of the bonds. For example, this issue from Nokia matures in less than a year but it is trading on a yield of -0.24%. Supporting the price at these levels guarantees a loss so the condition is unlikely to be sustained. 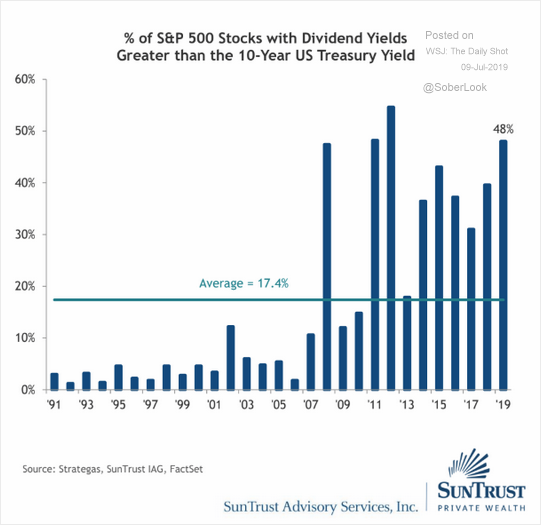 The bigger picture is that with almost $13 trillion in negative paper investors are desperate for yield. Right now, nearly half of all stocks in the S&P500 have a higher yield than the 10-year Treasury. That has contributed to defensives like consumer staples, utilities and companies that have adopted the subscription business model, with its streamlined cashflows, have been outperforming. 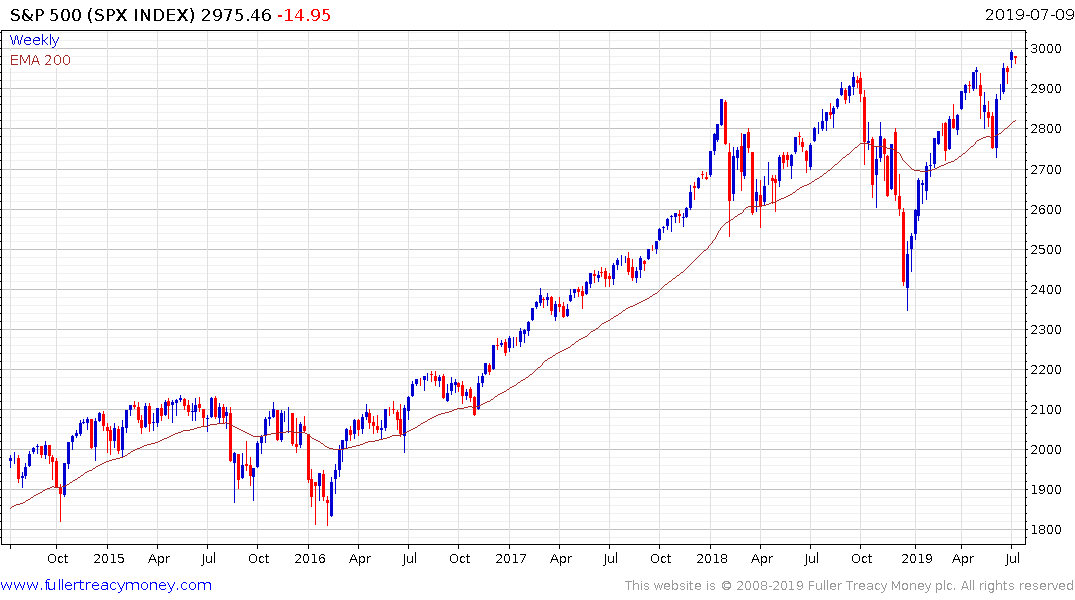 That has been one of the most important tailwinds for the decade-long bull market.

Investors are betting we are on the cusp of an additional round of massive monetary and fiscal accommodation aimed at arresting the decline in global trade activity.

I spent the last five days in Columbus Ohio at the National Fencing tournament with my daughters. The city is humming. There are major construction projects dotted around the area and a whole new town center is under construction in Easton. What was also interesting were the number of young transplants we met who had moved, mostly from the East Coast, in search of better standards of living.

That anecdotal evidence suggests there is limited need for the Fed to cut rates. It further highlights the transition from being data dependent to predicting the data points. More than any other factor that change will contribute to bubble risk.