The cause of the selling squall has been the perfect trifecta.  The coronavirus, the weak PMIs, and the impeachment.  While the stock market was already very overbought, and well extended above its 200day moving average (the S&P 500’s 200-DMA is currently at 3011.88 while the index was trading at ~3320) we were due for a pullback and the trifecta just served as the catalyst.  Speaking to the coronavirus, I was told over the weekend, from what I consider to be a reliable source, there is a cure for said virus.  My source said that a doctor in a lab at the city of Wuhan, central China’s Hubei province, had told him the Chinese needed three weeks to test the cure and if it works an announcement would be forthcoming.  He also said that in the hinterlands of China they eat rats, snakes, etc.  so, there is always going to be some kind of virus in China.  Now I do not know if the cure story is true, but if so, it would go a long way in settling the equity markets.  We see support for the S&P 500 (SPX/3225.52) at the current levels and then between 3180 – 3200).  This week the impeachment squall likely goes away and if the coronavirus story is true two of the trifectas get resolved.  As for the weak PMIs, we think the economy is just fine and will strengthen in the back half of the year.

The impeachment argument was indeed a source of worry for the media but the market never seemed to pay it much attention for the simple reason the Republicans have a solid majority in the Senate. Therefore, the entire spectacle was nothing more than crowd pleasing electioneering which did little more than to further emphasise the trend of political polarisation

Rumours that China has a “cure” for the Wuhan virus have been circulating for at least a week on the Chinese blogs and anti-Communist YouTube channels. That might be designed as a market calming propaganda piece but the alternative implication is that the virus was manmade to begin with and the release was intentional; aimed at wargaming a biohazard or aimed at eradicating the elderly population which are a burden on society.

The problem with not being entirely forthcoming with data and obfuscating of the number of cases and the mortality rate leaves room for conspiracy theories to proliferate. I have never heard of a cure for a viral infection. Vaccines prevent infection but need to be taken before infection not after. Therefore, any talk of a cure needs to be taken with a grain of salt. If a vaccine can be produced and tested in such a short time, the way in which it was arrived at needs to be fully explained to the global community. The wider geopolitical implications of a quick resolution are potentially worse than the short-term benefit because of the threat from biological warfare it would entail.

The most important point to monitor is the trend in the infection rate. When that slows or reverses it will signal the peak in the spread of the virus. Even though the death toll will likely rise following that event that is usually the peak is likely to be quickly priced into markets.

Other than these considerations, the supply of liquidity we are now seeing is likely to continue to be positive for asset prices. There has been a lot of commentary on the dire repercussions of negative real interest rates and the fact the TIPS yields are negative. However, if we look at the chart of the 10-year TIPS yield, forays below 0% have generally set up buying opportunities over the last decade and most particularly when lows are evident. 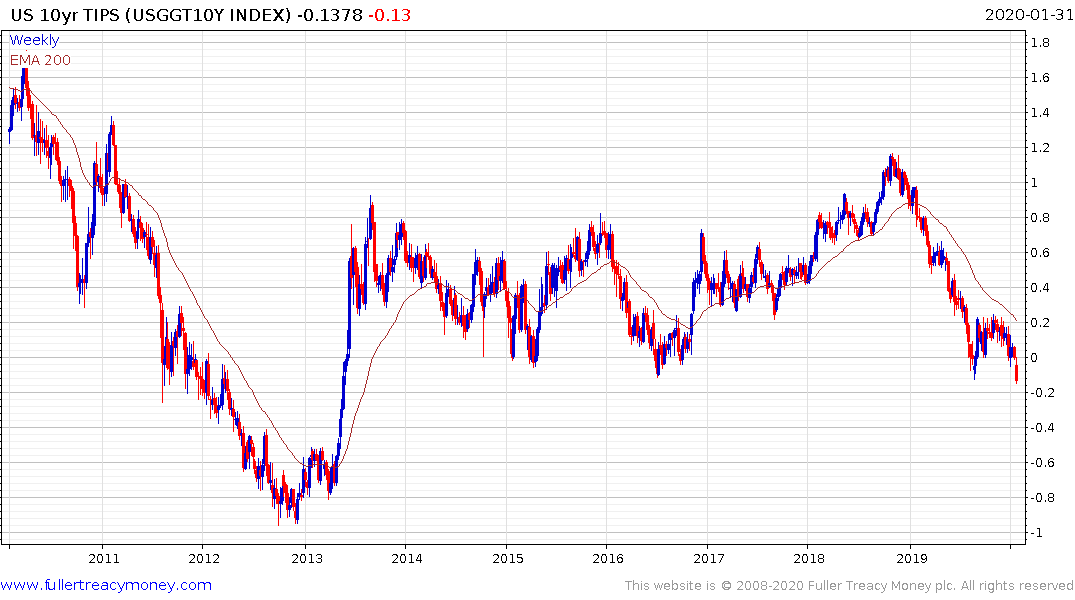 Additionally, the spread between the yield on 10-year Treasuries and the S&P500 is also back in negative territory and that has historically also represented a buying opportunity. The difference on this occasion is the S&P500 is only down about 3% from its peak whereas it was in the region of the trend mean on other major bottoms in the spread. That suggests we still have room for some consolidation, even as the medium-term liquidity fuelled rally remains in place.