RBC Electric Vehicle Forecast Through 2050 & Primer
Comment of the Day

Forecast global BEV sales penetration of ~66% by 2050 In the second phase, we see change factors aligning to impart more significant revolution. Battery costs decline, infrastructure is built out, and the regulatory-driven push gives way to a consumer-led one. BEVs become more cost efficient than ICE vehicles and take share from HEV/PHEV. By 2050, we see ~66% BEV global new vehicle penetration, representing a ~9% CAGR over a 25-year period from 2025. We see regions like China and Western Europe reaching 85% penetration. We forecast the US at 60% penetration.

The outlook for electric car adoption is a central theme in the outlook for lithium miners and other suppliers of the growing battery market. Going from 0.8% in 2017 to 7.5% in 2025 is not far of a 10X growth rate and while ambitious is realizable. There are massive construction projects underway, particularly in Asia to build out production capacity of batteries.

This report estimates battery production capacity will jump from 143GW in 2017 to 346GW by 2025. China is well positioned to be the primary manufacturer of batteries since it is aggressively securing access to key commodities while simultaneously investing in large manufacturing projects. Since it is now the largest market for automobiles, this represents a clear signal that China wishes to avoid a total dependence on oil as a transportation fuel in future. 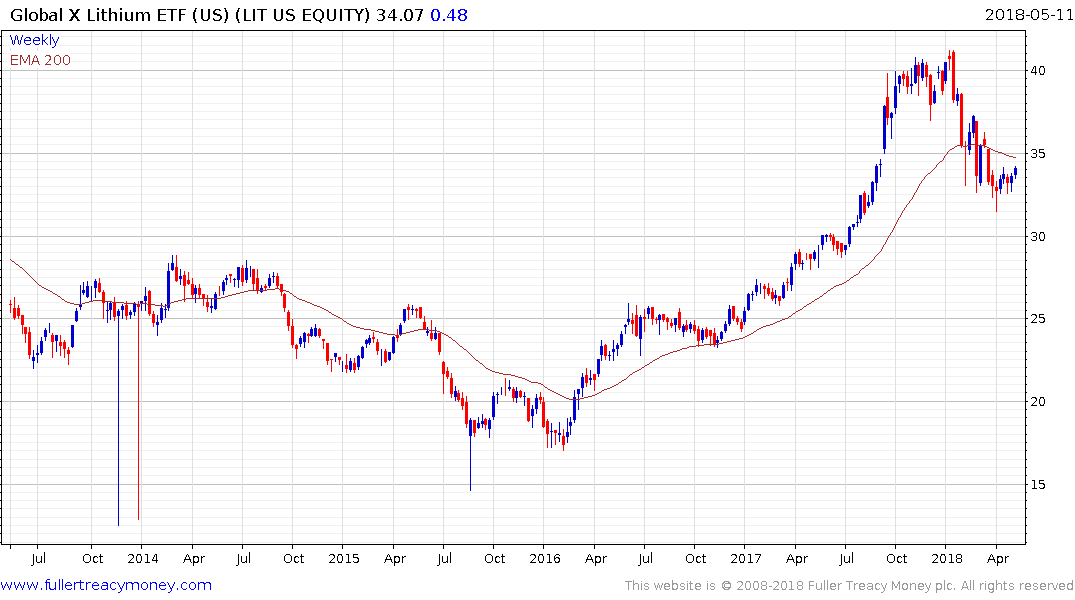 Lithium miners have been pulling back over the last couple of months on overproduction fears. However, if electric car growth comes in as expected overproduction of lithium is unlikely to be more than a temporary obstacle for the sector. The Global X Lithium & Battery ETF has steadied over the last few weeks and is now testing the region of the trend mean. It needs to sustain a move above $35 to confirm a return to demand dominance in this area.