​Lowe conceded that assessing the outlook is problematic when inflation dynamics aren’t well understood and the world is so uncertain.

“We will now be putting a greater weight on actual, not forecast, inflation in our decision-making,” Lowe said, outlining the RBA’s latest thinking on prices in a speech on Thursday that hinted at further easing to come.

Annual inflation has averaged 1.7% since Lowe took the helm at the Reserve Bank of Australia in 2016, versus a target of 2%-3% over time, and has now dropped below zero.

Central banks have no choice but to pursue inflation with every tool they have available to them. Not only has the pandemic unleashed massive uncertainty, but their is no plan for how the debt taken on to combat it will be repaid.

We have been through a decade where various efforts at fiscal austerity have been attempted. All they succeeded in doing was creating demand for more spending and the rise of populism.

The solution is therefore to abandon fiscal discipline and attempt to stimulate our way out of trouble, with a good dose of inflation mixed in for insurance. That conclusion is wending its way around the world. It suggests there is likely to be reflation boom over the coming couple of years.

The S&P/ASX 300 Resources Index is currently bouncing from the region of the trend mean. 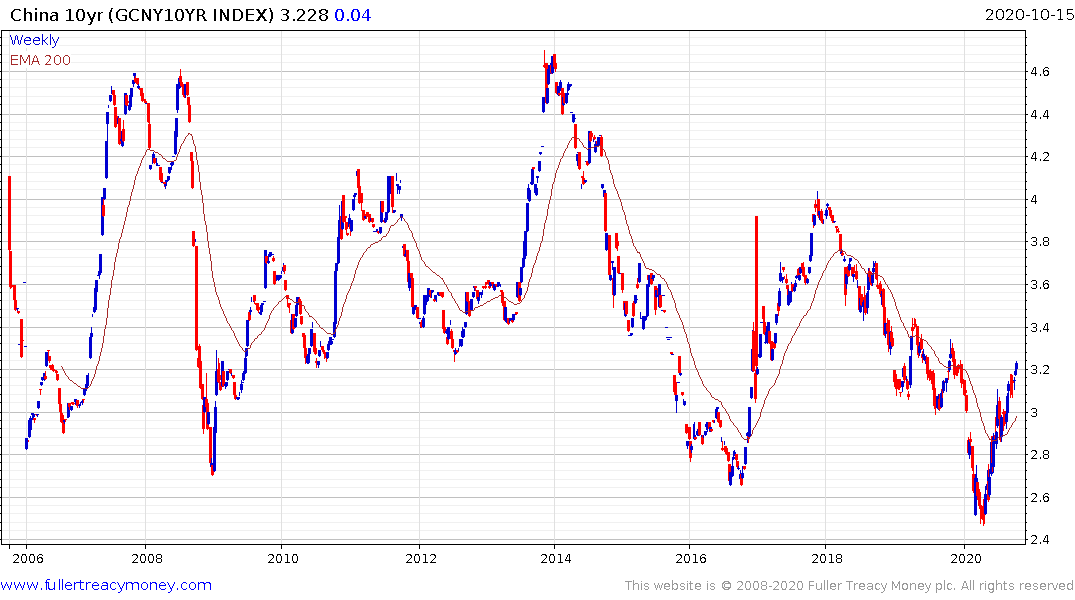 At present the rising yield on Chinese government bonds suggest it will probably be the first country to raise rates. That represents a fundamental tailwind for the Renminbi which is likely to encourage commodity imports.