The vague wording of the Chinese state media report opens the door for Beijing to target a broad swathe of the global tech industry -- from U.S. giants like Alphabet Inc.’s Google, Qualcomm Inc. and Intel Corp. to even non-American suppliers that have cut off China’s largest technology company. Those run the gamut from Japan’s Toshiba to Britain’s Arm.

“Surely companies that have announced cutting supplies to Huawei, such as Panasonic and Toshiba, would be under threat,” said Michelle Lam, Greater China economist at Societe Generale SA in Hong Kong. “It could be very damaging to multinational companies.’’

The lopsided nature of the trade relationship between the USA and China means the impact of tariffs is equally lopsided. China’s decision to stop buying agricultural products and to advise the population to boycott US goods is the extent of what can be achieved. The geopolitical theatre is where China has more cards to play, not least in its support for North Korea, Iran and Pakistan. The purge/execution of North Korea’s lead negotiator with the USA over the last week is a sign that card is also being readied for play. 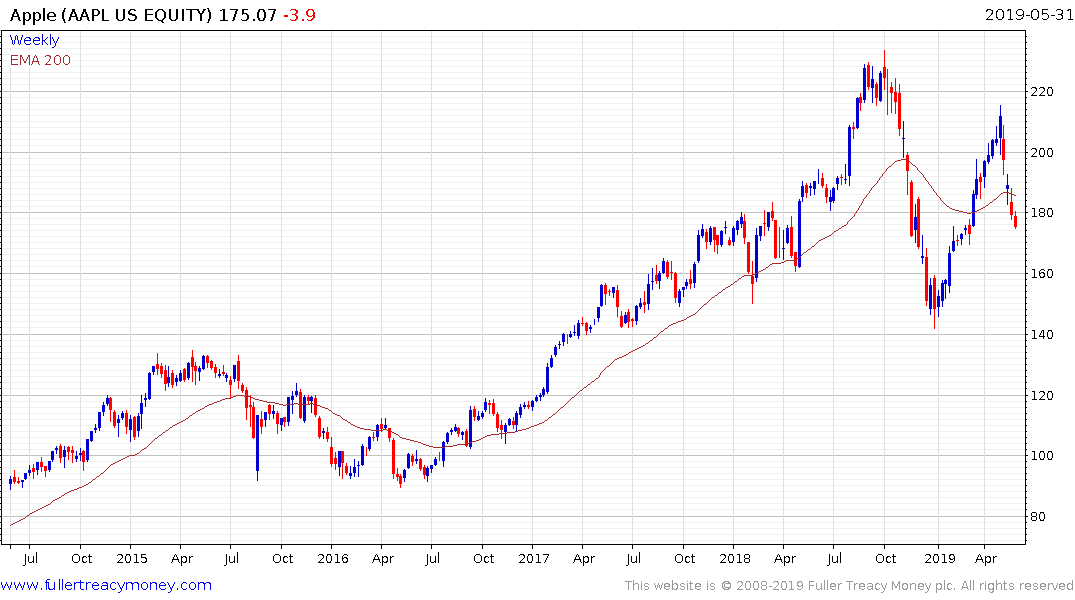 Apple continues to unwind its rebound from the January low. If we address the share’s price history, we observe two previous occasions when medium-term corrections have persisted for about 18 months and it is reasonable to expect that this corrective phase will be of similar duration. 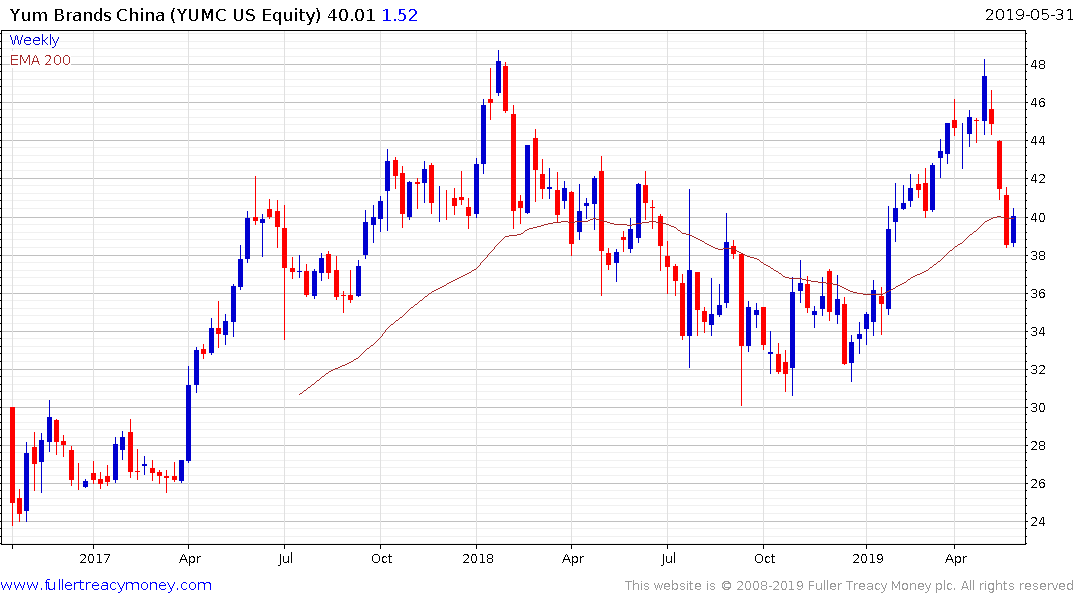 KFC’s outlets are ubiquitous in China but the company spun of Yum China in 2016. The share pulled back sharply from the region of its peak this month but steadied this week in the region of the trend mean despite the escalation in trade frictions. 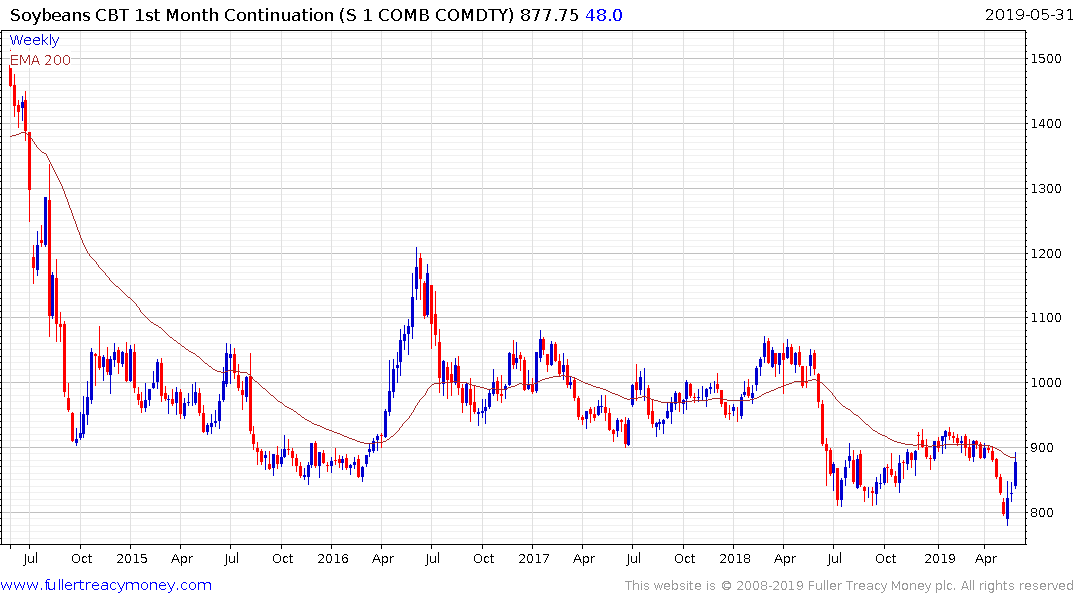 China might not be buying soybeans but the price is rising, with a strong bounce from the 800 level this month. 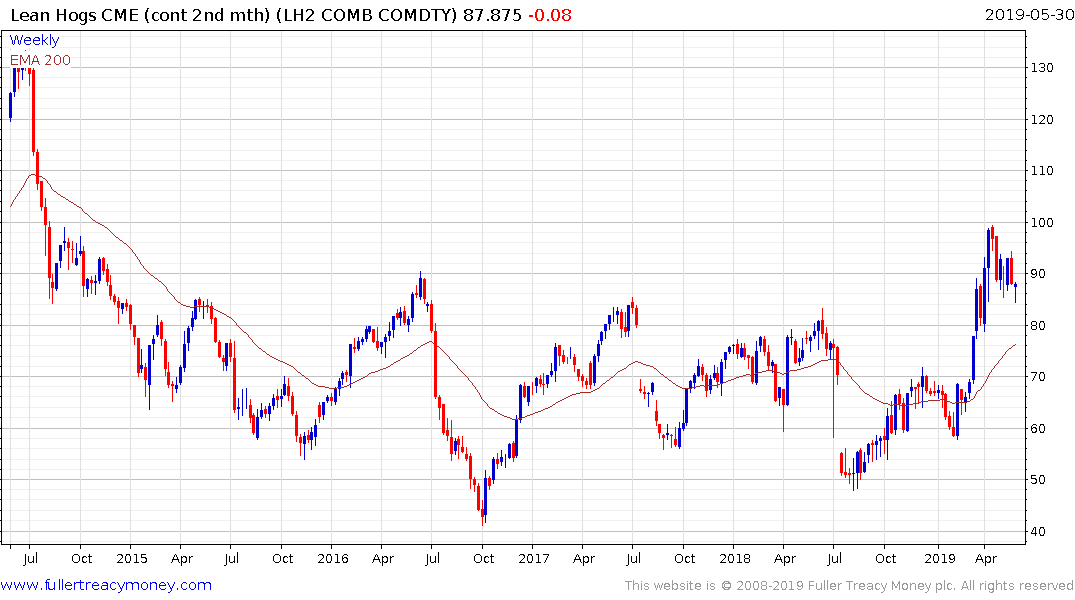 Lean hogs, having surged in March, is rolling over and a reversion towards the mean is looking increasingly likely. 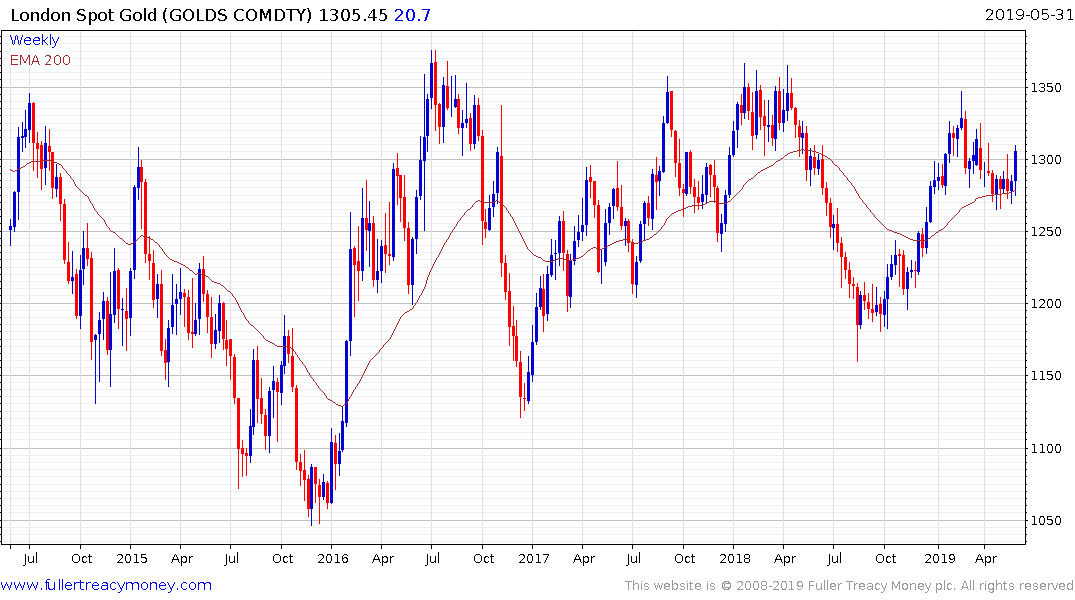 Gold is also starting to garner interest for its safe haven qualities and popped back above $1300 today. Upside follow through on Monday would break the four-month downtrend and signal a return to demand dominance beyond the short term. 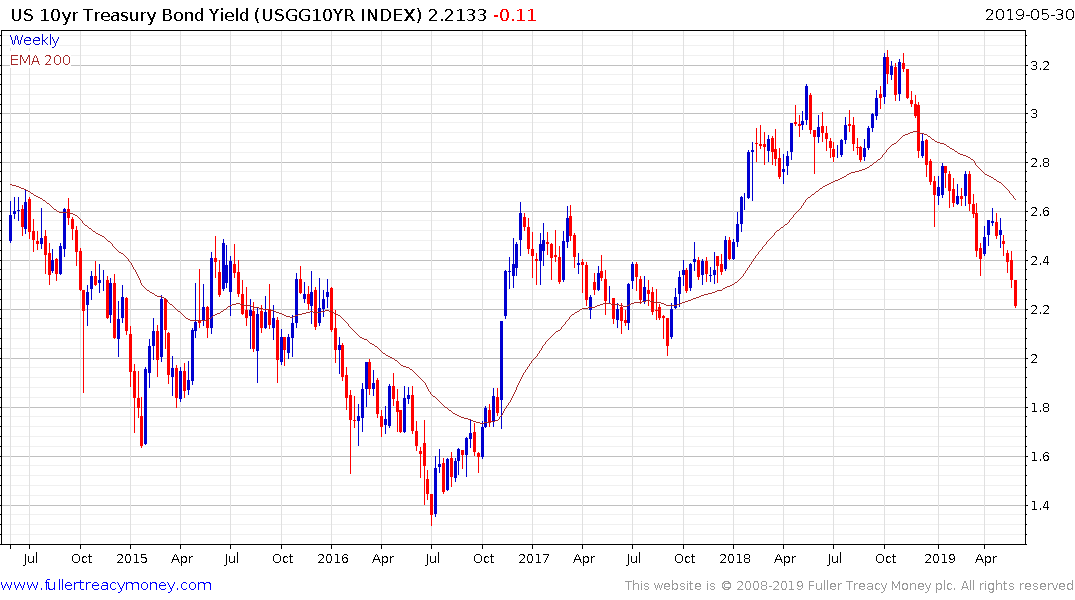 Continued demand for US Treasuries and the resulting strength of the Dollar are perhaps the clearest signs of safe haven buying amid continued uncertainty about what new surprise is going to land on our desks overnight.

This compression in yields is hard to ignore because of what it portends for interest rates. However, my barometer for discretionary consumer demand is Mrs. Treacy’s Amazon store which is on average selling 30% more than this time last year. Generally, February and May are the best months in the first half of the year because of Valentine’s Day and Mother’s Day/graduations respectively. This year May’s units sold were ahead of February’s which is the first time that has occurred in the three years she has had an Amazon Prime label. That suggests consumer spending is rebounding following the winter and therefore economic growth may not be a weak as many economists are anticipating.