Platinum into the next decade
Comment of the Day

Platinum into the next decade by Eoin Treacy

The world still needs more platinum despite the fall in Autocat loadings
The rise in electric vehicles (EV’s with very low or no PGM’s) will reduce the average vehicle platinum loading and contribute to lower demand growth than we have seen historically. Importantly however, under what we consider reasonable (2.6% CAGR) vehicle demand growth, we still forecast growth in gross Autocat demand. A modest increase in fuel cell vehicles (with high platinum loadings) is likely to offset some of the platinum demand destruction from EV’s. Furthermore a “catch-up” in emission standards in the emerging markets such as India and China should also offset the general trend in declining loadings. We outline our forecasts for platinum. Under our base case, we forecast that an additional 1.5Moz will be required by 2030.

The Auto sector is nearly self sufficient due to recycling.
We forecast a continuation in the trend of the increasing metal units being returned to the market over the next fifteen years. The three major Autocat producers (BASF, Johnson Matthey and Umicore) are all adding recycling refining capacity, specifically targeting recycled material. Furthermore, the tranches of Autocats being returned to the market over the next few years all have higher PGM loadings, especially in platinum. We forecast Autocat platinum volumes to double by 2030, which equates to a CAGR of 4%.

?However, the CAGR between 2014 and 2021 is likely to be closer to 8%.
We estimate that the Autocat industry will be a net supplier to the market up until 2020, whilst the additional new ounces required by 2025 will be negligible. By 2030, the additional requirement should be 300koz, equivalent to a large platinum mine, or a two mid-sized mines. The net result is that Platinum demand (post recycling) growth should be slower over the next fifteen years, compared to the historical trend. We estimate a CAGR of 1.1% versus the trend (1975 – 2014) of 2.2%.

Enough replacement ounces from the existing supply base until 2021
The amount of new platinum ounces required from the Southern African mining industry is limited, especially over the next seven years. The existing fleet of development and replacement projects should be sufficient to offset the endemic grade decline and mine depletion (see Figure 6). Furthermore, these projects have favourable economics relative to the current production base, as most projects have also sunk significant capex, lowering the return requirement as a result.

The automotive sector is in a process of evolution with China mandating greater use of electric vehicles and tighter emission control while Tesla represents the cool side of the sector. Toyota, Linde, among others, and the platinum miners are championing the build out of hydrogen fuel cells. Both represent corollaries to innovation of solar and wind technology that is making distributed electricity production possible. Sergio Marchionne at Fiat is arguing for fabless manufacturing in the automotive sector which has the potential to act as an additional catalyst for the sector. 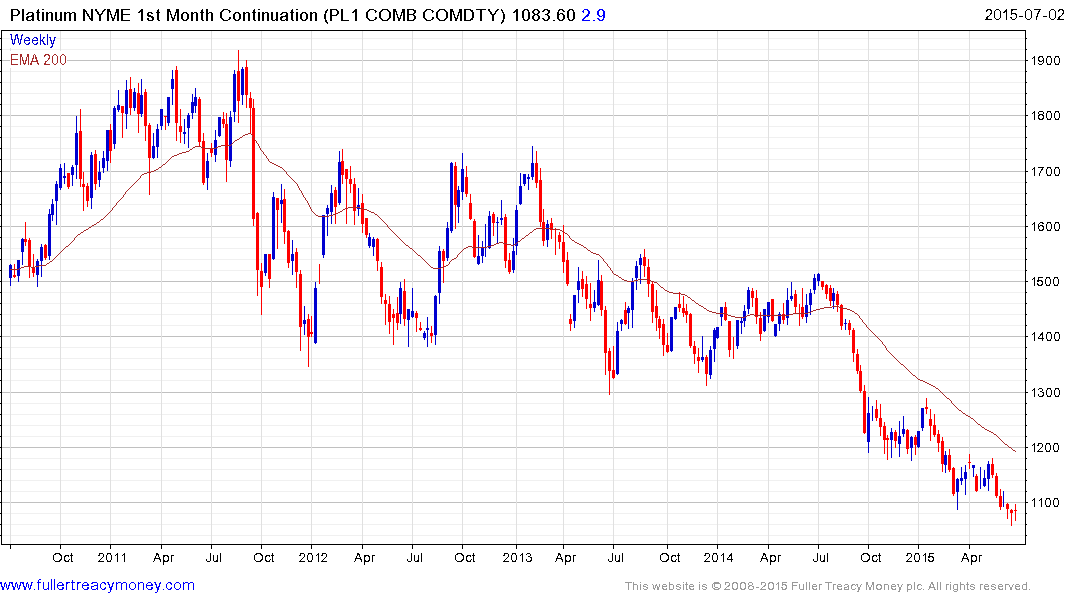 Against this background the potential for demand growth to undershoot is non-trivial and is represented in the continued downtrend in platinum. The price rebounded impressively from the 2008 low but experienced a Type-2 massive reaction against the prevailing uptrend in 2011 and has been trending lower since. It is currently somewhat overextended relative to the trend mean but a sustained move above $1200 would be required to question medium-term supply dominance. 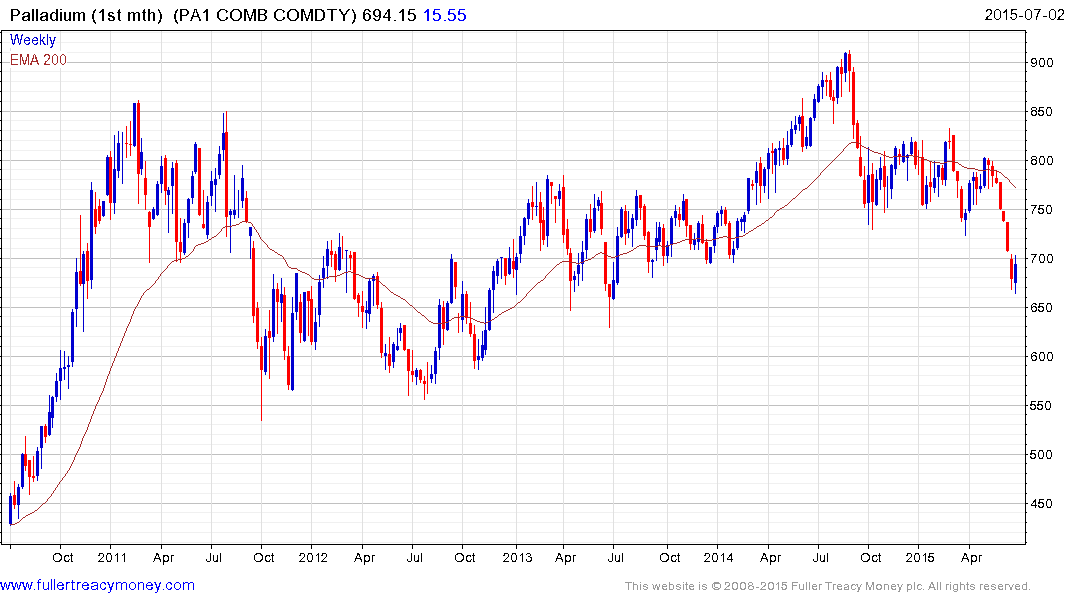 Palladium has broad top formation characteristics. It rallied impressively on Wednesday to check its short-term downtrend but will need a sustained move above $750 to question the medium-term supply dominant environment. In the meantime the low near $660 will need to hold if potential for mean reversion is to be given the benefit of the doubt. 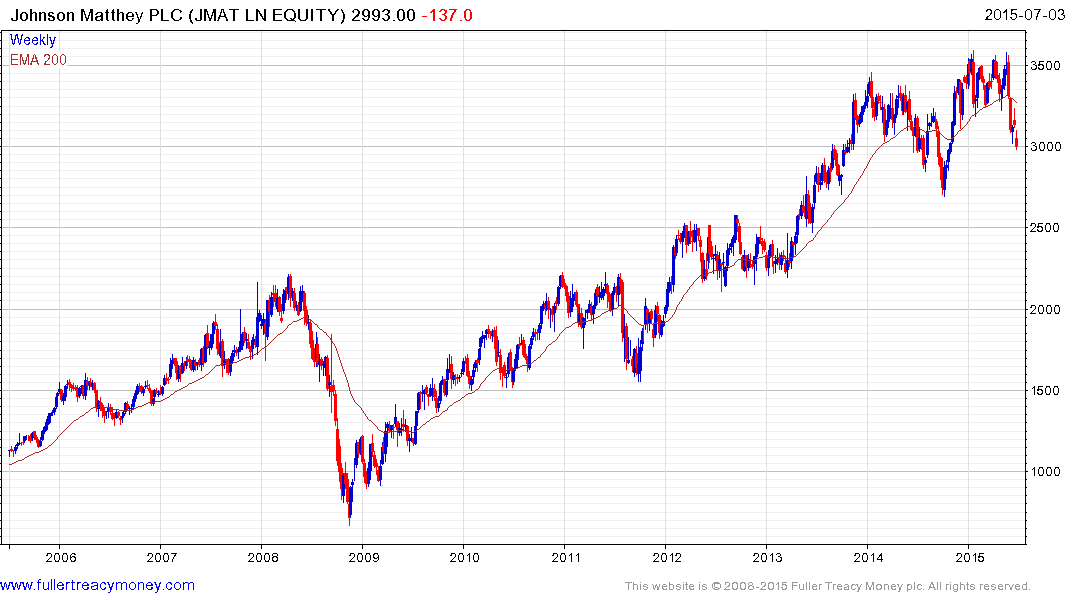 Johnson Matthey trended higher in a reasonably consistent manner until early 2014 when it lost momentum. It traded below the trend mean for a few months in 2011 but the trading action over the last 18 months is occurring from a higher level and the share encountered resistance in the region of the 200-day MA last week. It will need to sustain a move above 3270p to suggest a return to demand dominance. 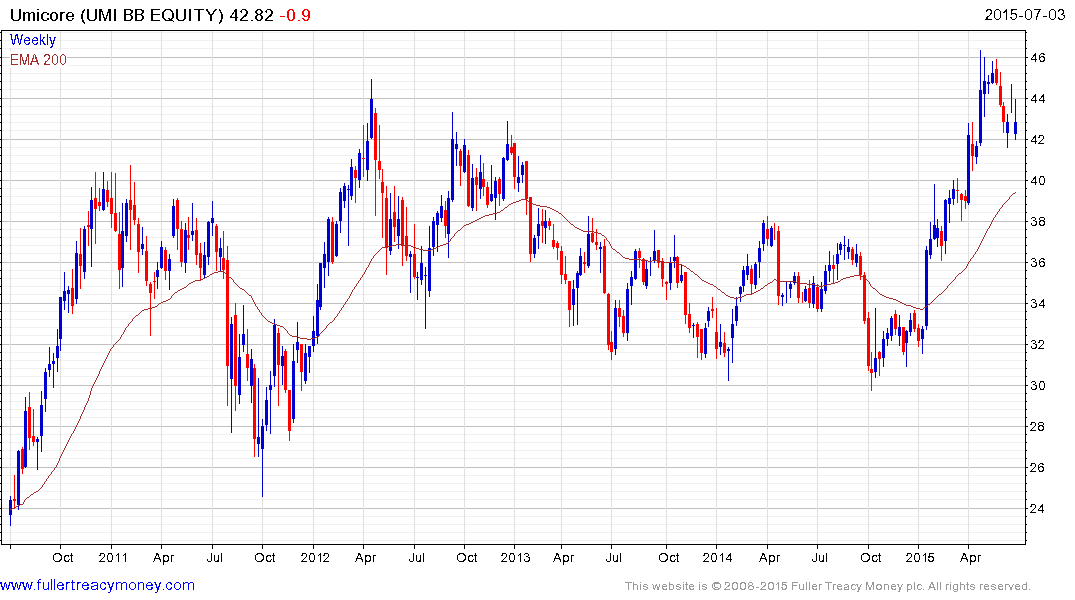 Umicore has been largely rangebound since 2011 but hit a new high in May and has been confined to a reasonably tight range since. A sustained move below the trend mean would be required to question medium-term scope for continued higher to lateral ranging. 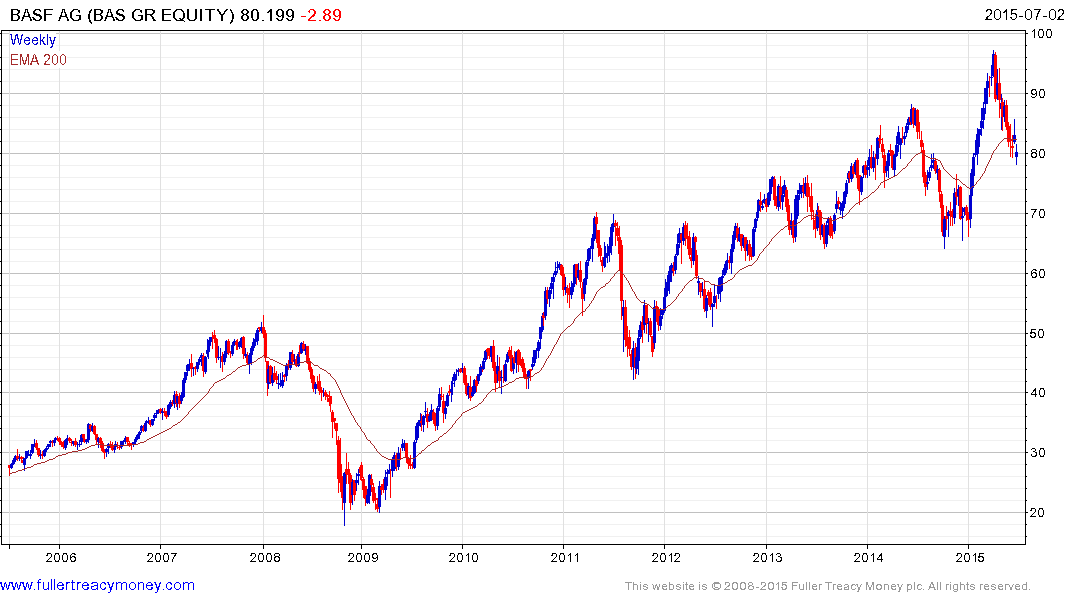 BASF has been trending higher in a choppy manner for much of the last seven years. It rallied impressively in line with the fall in the Euro from early this year and has since pulled back to test the region of the trend mean.