Peering into the post pandemic world by Eoin Treacy

Almost every major crisis and recession has resulted in lasting implications. The 1973 oil crisis ended the Bretton Woods system and brought about the regime of floating currencies and exchange rate volatility. September 11 permanently changed the way we travel and raised the level of security in public settings and airports. Unprecedented monetary easing after the 2008 Great Financial Crisis further propelled the unlikely continuation of the 30-year rally in government bonds and facilitated the resurgence of tech stocks and credit markets. The Global Covid-19 Crisis will also leave its permanent imprints on consumers, markets and economies. Although we are only a few months into the crisis, it is key to look forward to the next economic cycle and ask: what are the structural changes created by the Covid-19 outbreak and who will be the winners and losers?

For companies, the focus will shift to building resilience
As the virus outbreak results in demand and supply shocks unprecedented in terms of speed, depth and breadth, many companies face tremendous pressure, and this will have a lasting impact on risk perception.  Companies will turn more cautious and focus on building resilience in terms of their business strategies and balance sheets, and shareholders will expect management teams to take steps to ensure that the business is strong enough to take the next big shock.

Consumers are wondering about what the trajectory for their earnings are going to be. Nobody knows what the outlook for their businesses is likely to be in the aftermath of the lockdowns or how long recovery is going to take. There is a temptation to think corporations are going to be as cautious as individuals.

The lesson from the aftermath of the credit crisis, when there was also a significant hit to sentiment is the companies that held the least cash and took the biggest risks were the biggest successes. When the central bank back stops markets, when liquidity is free and abundant risk takers are rewarded. If they succeed, they are held up as paragons of industry. If they fail, they have captured so much market share they have a good chance of being bailed out. The airlines learned that lesson after 9/11 and they held almost no cash going into this crisis for exactly that reason. Continued government bailouts of troubled businesses only encourages egregious behaviour.

The only way to ensure companies do in fact hold more cash and deleverage their balance sheets is if the threat of failure is real. The massive monetary and fiscal stimulus implemented globally over the last two months has inflated asset prices again and the Nasdaq-100 is back 9000 and positive for the year.

There is a logical question whether the outlook for companies is the same or better than it was in January and anyone looking at valuations and uncertainty would probably answer no. However, the wall of cash hitting the market supports risk taking because the assistance will be increased in the event of additional weakness. This is the primary argument in the market today. 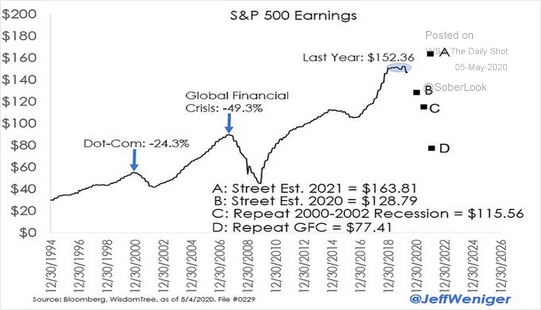 This graphic depicting S&P500 earnings looks like a peak. 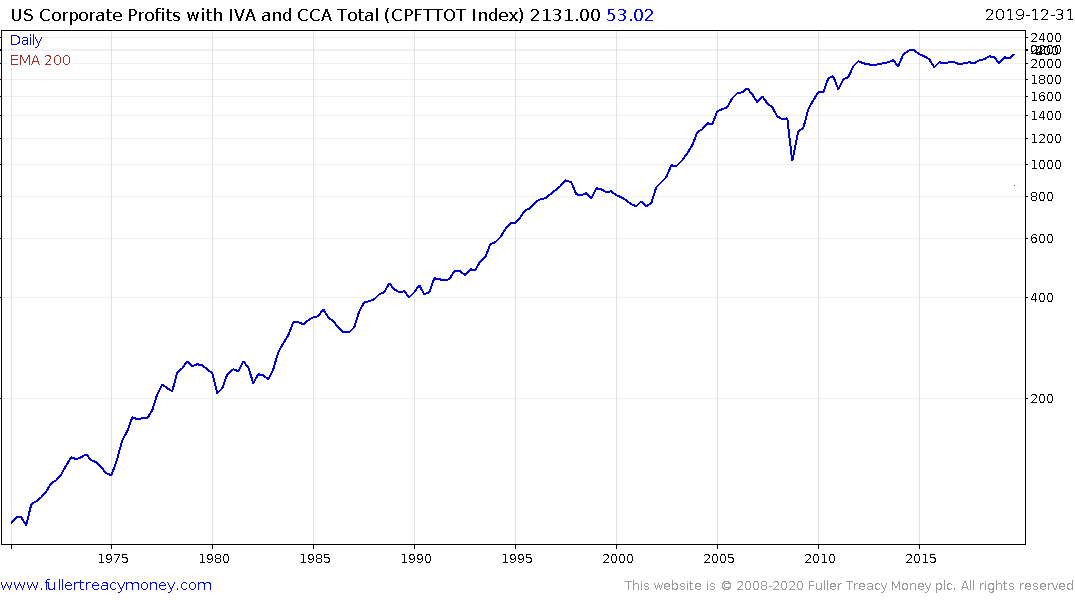 The conclusion is corporate profitability and earnings have very likely peaked for this cycle. At the very minimum that suggests much greater dispersion in returns between the winners and losers. At worst it suggests a lengthy period of retracement where the excesses of this cycle are corrected.

Both David and I regarded the bull market from 2008/09 onwards are liquidity fuelled. That is more the case now than ever. The flood of liquidity is the primary bullish factor supporting stock market rebounds and since the USA’s response has been greatest it is Wall Street which is leading the rebound.

The Fed’s balance sheet is expected to jump to upwards of $12 trillion by the end of the year. That represents a tailwind for asset prices but the risk of fuelling a bubble with this activity is very real. 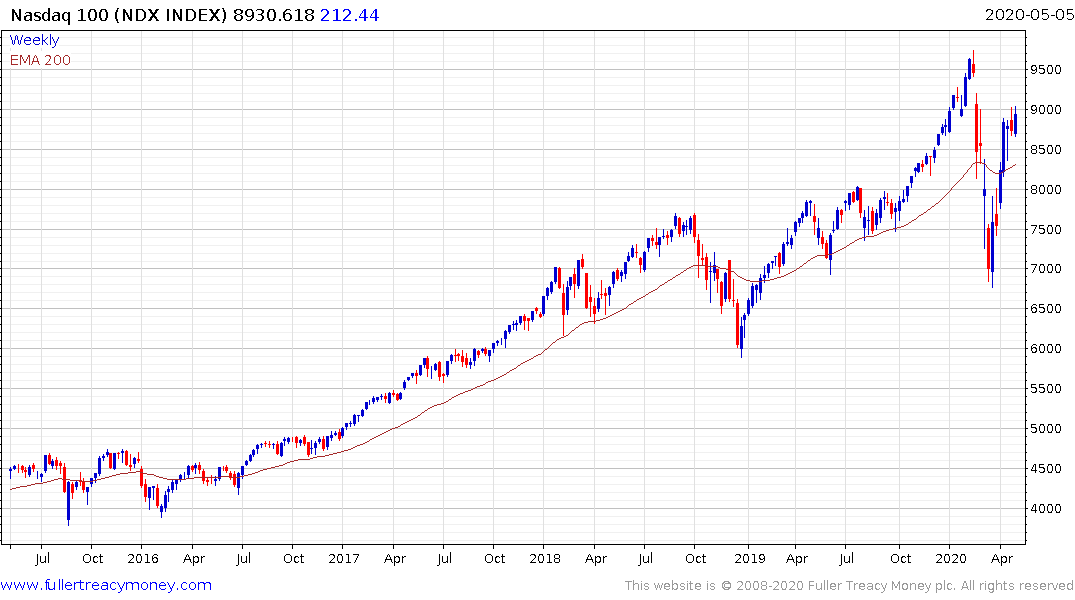 The Nasdaq-100 paused below the psychological 10,000 level in January and it is reasonable to expect at least ranging below that level, while an extended top can’t be ruled out either. 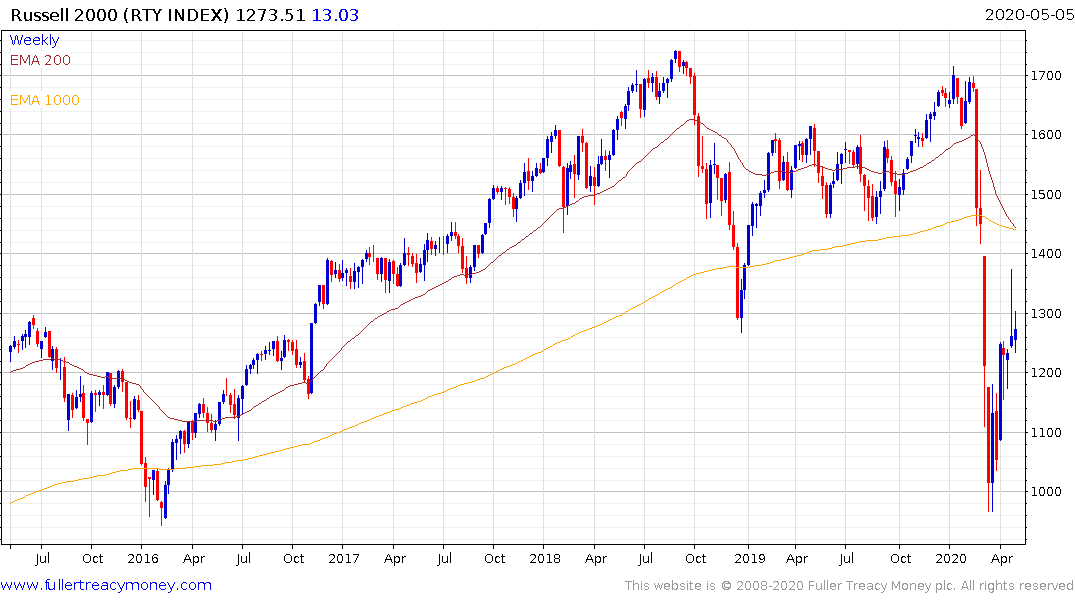 The Russell 2000 Index peaked in 2018 and failed following a retest earlier this year. It returned to test the upper side of the overhead trading range last week but the minimum requirement to signal a return to demand dominance beyond the short term would be a sustained move above 1400.

The one thing I am closely monitoring is how close the 200-day MA is to falling through the 1000-day MA. It came close during the 2015/16 correction but a massive rally is going to be required to avoid that outcome on this occasion. When the 1-year moving average falls through the 5-yeear it’s a clear signal prices are falling on aggregate and that is pretty sound confirmation the bull market is over.

Generally speaking, small caps are representative of the real economy and big company rely on small caps for income. How long can the mega-caps hold out if the real economy is hurting so badly? That’s the question everyone wants the answer to but the rebound in oil is so far lending some assistance to the stock market rebound.

I haven’t personally bought into this rebound because of the damage done to the consistency of the medium-term trends. The outlook for gold remains much more consistent than what we see in stock markets. It just seems like the easier play to me until we have evidence of support being found above the lows.