Not Random: The Gold-Silver Ratio
Comment of the Day

Not Random: The Gold-Silver Ratio by Eoin Treacy

But by early July – perhaps startled by the attention it was receiving – the ratio performed an abrupt U-turn.  Silver zipped from $14.92 US dollars per troy ounce on July 5th to $16.55 in just 19 days.  The 11 percent appreciation swallowed the 2 percent move by gold over the same time period and brought the ratio down from 94 to 86.   Predictably, press attention waned.  For the month of September, the ratio averaged 83 and no other ratio articles crossed this author’s desk for the rest of the year.  But while everyone’s attention was averted the apparently shy, private ratio staged a comeback.  For December the ratio was 86.

Is it all a Magic-8 Ball novelty?  Your author does not believe so.  For at least 150 years the ratio has served as an indicator of the global monetary condition.  During periods of inflationary monetary proliferation, the ratio falls.  During eras of deflationary monetary destruction, the ratio rises.  To put it plainly, these highs are alerting us to a pervasive capital shortage.  The financial fuel required to power the machinery of international commerce is not in abundant (enough) supply. 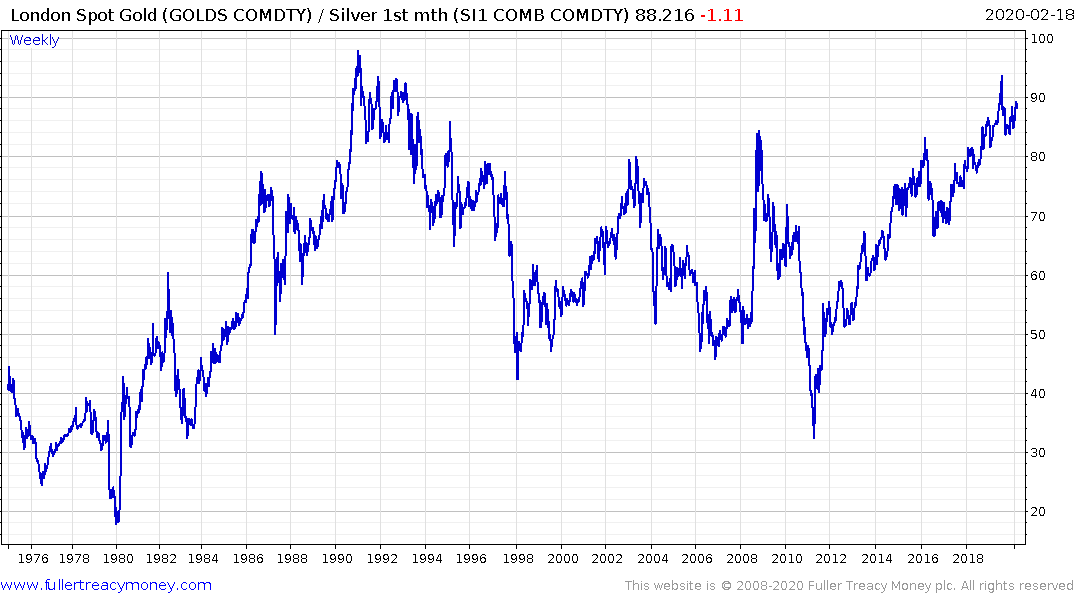 The gold/silver ratio traded above 90 for a brief time in the summer before dropping to break its sequence of higher reaction lows. That prompted breathless speculation that a major reversal was underway, only for the ratio to pop back up and test the high. The big question now is whether than move can be sustained. 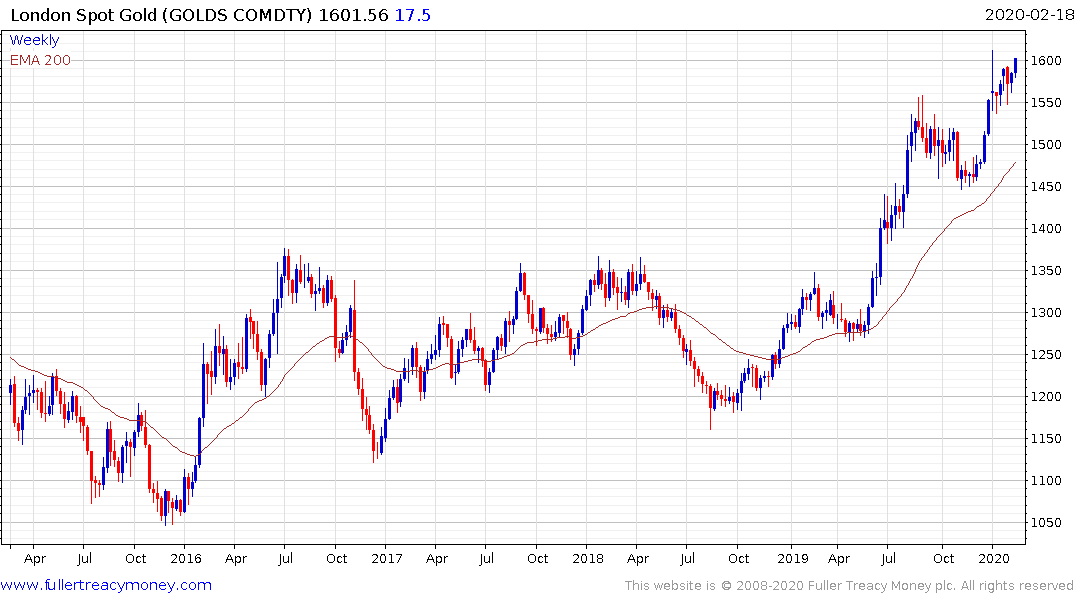 Gold broke successfully above the psychological $1600 level today to reassert medium-term demand dominance. There is a clear argument that the response to the coronavirus threat will be easier monetary and fiscal policy, than might otherwise have been the case. That is a threat to the purchasing power of fiat currencies. Gold is the global barometer of faith in fiat currencies and its breakout suggests investors are in developing an appetite for hedging. 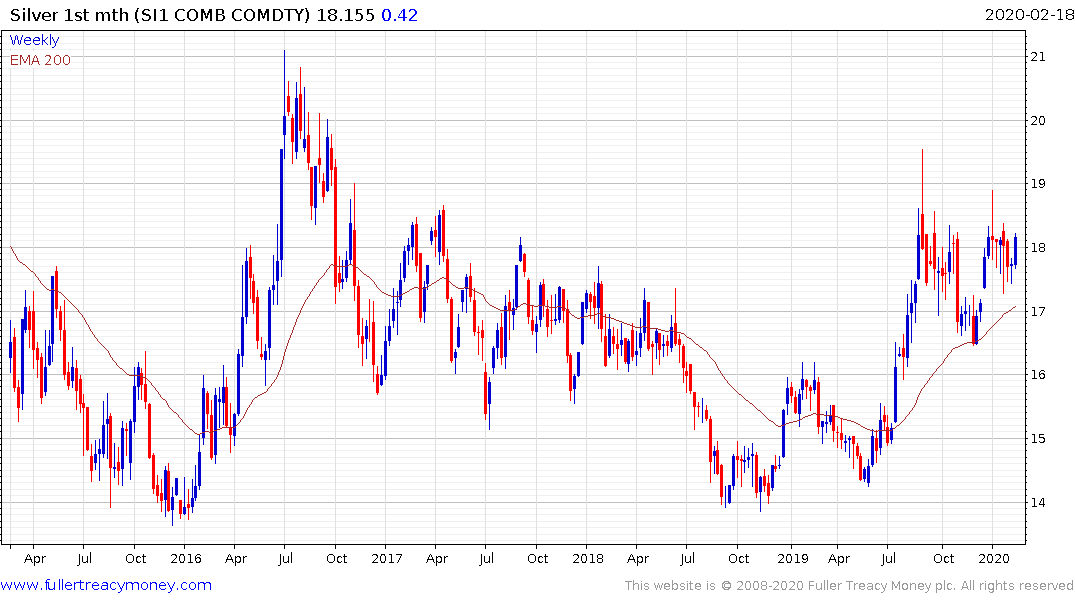 Silver rallied to break a short-term sequence of lower highs in January and has been consolidating since. It firmed within its range today and a sustained move below the trend mean would be required to question medium-term recovery potential. 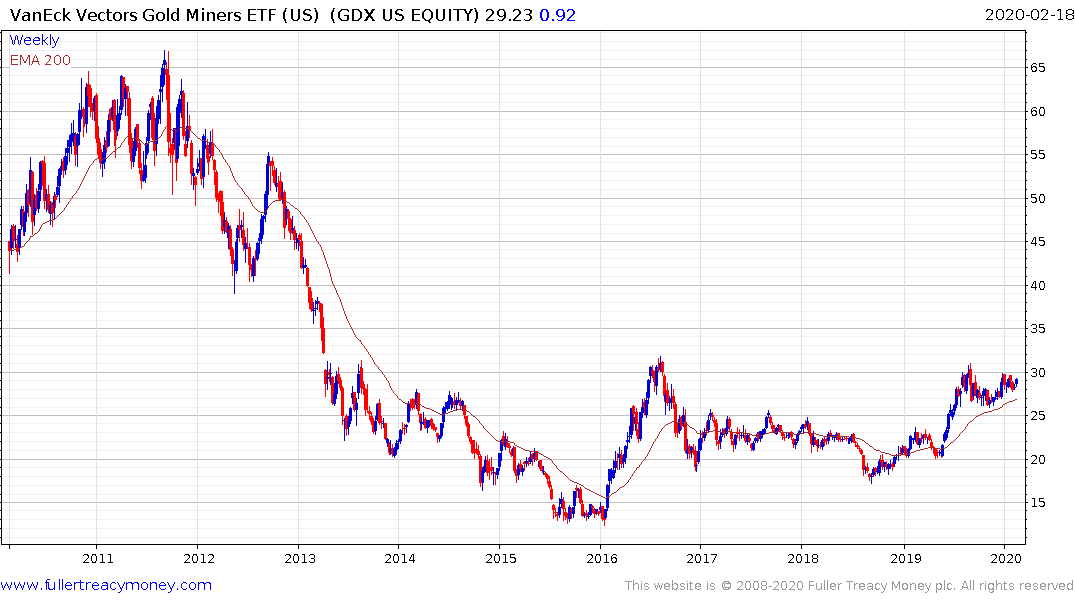 The Gold Miners’ ETF is on the cusp of completing a seven-year base formation and a sustained move above $30 would confirm a return to medium-term demand dominance.