The seeds of the current glut were sown when the coronavirus shut down commercial flights earlier this year and forced some gold refineries to close. The shutdowns strangled the supply routes that allow physical bullion to move around the globe, and prompted banks to step back from arbitraging between the London and New York markets. At the same time, demand for gold as a haven grew amid fears of the pandemic’s economic toll.

The premium for New York futures over London surged as traders rushed to avoid delivering in April, instead buying back contracts they had sold short.

Traders trying to capture that premium were able to arrange physical delivery, swelling inventories. Key refining hub Switzerland shipped a record amount of gold to the U.S. in April, according to figures dating back to 2012. Australia’s Perth mint also ramped up production last month and shipped bars to the Comex.

There was an acute shortage of physical gold in New York for a few weeks in April. That resulted in the spread between the London spot rate and Comex futures surging to $70. That encouraged suppliers from around the world to charter planes to ship inventory to New York to capture the arbitrage. Now that the supply deficit has been eliminated the spread has come back down to more normal levels. However, there is now also a surfeit of physical gold in New York looking for a home. 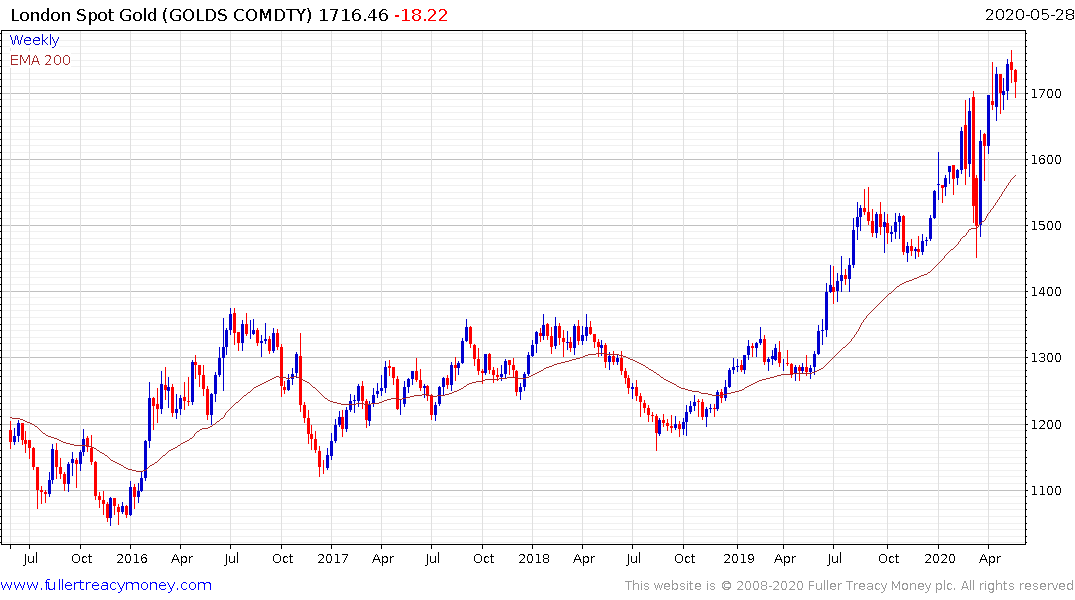 The price of gold is potentially susceptible to some negative influence as contract rolls come around. However, since there is no big futures fund dominating front month positions, like there is in the oil market, the influence is unlikely to be anything like what happened in oil.

Of much greater importance is the fact the Dollar Index has broken its sequence of higher reaction lows. That represents a tailwind for the gold price and helps to explain why it has been steady despite the distortion in the futures market.