“It’s literally as if the market makers didn’t show up for work,” Curnutt said in a Bloomberg Television interview, referring to options and junk-bond exchange-traded funds such as the iShares iBoxx High-Yield Corporate Bond ETF, known by its ticker, HYG. “The posted bid-offers on the screens illustrated that there was no one in the market posting for something that is one of the more liquid -- usually -- hedges to use.”

Banks have been constrained by rules created after the 2008 financial crisis. That has pushed some market-making activity to other types of financial institutions including Citadel Securities and Virtu Financial Inc., which was one of a handful of firms that rose in trading Monday as the S&P 500 slipped
7.6%.

“The traditional liquidity provider in times of stress -- the bank -- really isn’t there,” John McClain, portfolio manager at Diamond Hill Capital Management, said in an interview. “Banks themselves have a lot more regulation around what they can be doing.”

Still, for all that, trading was relatively orderly in HYG and other debt ETFs, especially compared with the underlying bonds. The liquidity concerns still didn’t mean there was a “full-blown breakdown in markets,” Curnutt said.

Philipp Hildebrand, vice chairman of BlackRock Inc., agreed. “I was there in 2008, and the difference is the financial system essentially seized up, which is not what happened, at least not so far,” he said. “It’s an important signal that the ETF market functions.”

ETFs have been a wonderful innovation which have opened up asset classes which were never previously available to retail investors. They have also allowed the cost of investing to come down and reduced performance deviation from the broad market averages. The challenge is ETFs can often be more liquid than their underlying indices and instruments. That represents a significant challenge in times of stress and particularly during bouts of contagion selling. 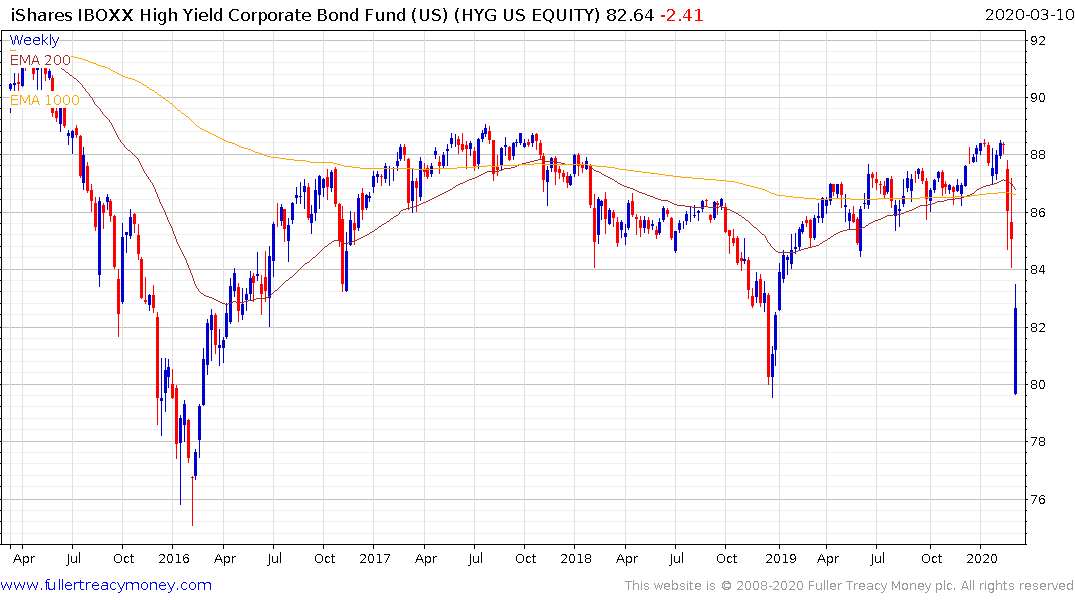 High yield spreads surged higher yesterday and selling pressure is still a significant risk. The additional risk of multiple downgrades from the Fallen Angel category is likely to further widen spreads but perhaps not right away. High yield tends to trade like equity and widening spreads are generally a lead indicator for liquidity issues in the broader economy.

It is still possible to make the argument that the global economy is capable of bouncing back and the continued supply of fresh stimulative measures, almost on a daily basis, will eventually gain traction. The challenge will be in determining how long it takes to get the outbreak under control, globally, and thereafter for demand to recover.  Until that happens there is still likely to be downward pressure on prices. 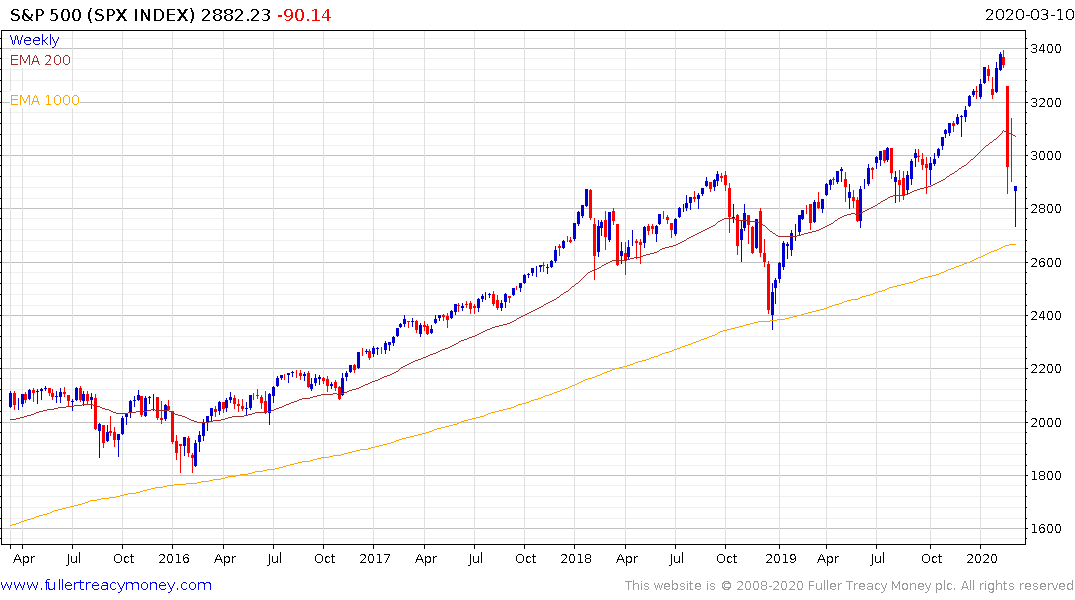 The clear conclusion is the viral outbreak and now the price war in the energy sector make issues the investment community were worried about last year worse. That is now particularly relevant for companies with compromised balance sheets. Major indices encountering resistance in the region of the 200-day MA and sustaining moves below the 1000-day MA would confirm significant top formation completion on the major indices. 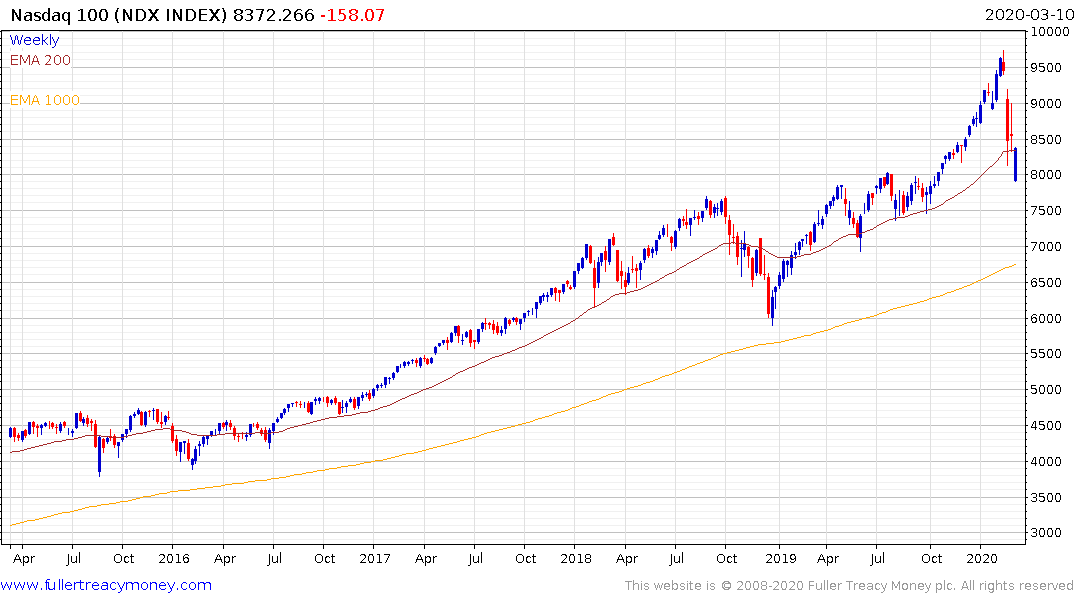 So far, retail investors with concentrated portfolios in the FAANG stocks have sustained relatively little profit erosion and continue to adhere to the buy-the-dips mantra. That strategy always works in a bull market but a hallmark of a change of trend is when buy-the-dip fails.

Today’s downward dynamic in the Yen, the short-term low in crude oil and continued resilience of the Nasdaq-100 supports the view a bounce is underway. The clearest evidence a low of medium-term significance has been reached would be a successful retest of the low and subsequent rally back above the 200-day MA for the majority of stock market indices. With President Trump now suggesting a waiver on payroll taxes through November, the cynical response would be to conclude it is an effort to buy votes but it would certainly help to boost sentiment.  If that kind of fiscal stimulus is deemed probable, it would at least help to arrest selling pressure.

Type-2 tops are characterised by a massive reaction against the prevailing trend that is characterised by as a surprising bolt-from-the-blue. It takes times for the argument about whether the effect is short-term or medium-term in nature so a range often forms below the peak. We may now see a range form between the 1000-day and 200-day MAs on the S&P500.