Market Keeps Distancing Itself From Economy
Comment of the Day

Market Keeps Distancing Itself From Economy by Eoin Treacy

The rate of labor force dislocation, albeit distressing, appears to be moderating. The weekly 3 million jobless claims number is the lowest in the last seven weeks and less than half the worst level.

The report highlights the urgent and important policy priorities of dealing both with the implications of such a terrible shock to jobs and with ensuring that short-term problems don’t become long-term ones that are much harder to solve.

With markets focusing on the improvement in the “second derivative,” that is a reduction in the rate of labor force dislocation, U.S. stocks rose. This widens an already considerable decoupling from the real economy and will fuel the debates on Wall Street versus Main Street, companies versus people and the well-off versus the marginalized.

Didi’s CEO was quoted today stating the company has recovered to about 70% of the number of rides taken before the Chinese lockdown began. That’s an impressive rebound, particularly as we look at what the trajectory of recovery will be for countries only beginning to ease lockdowns today. 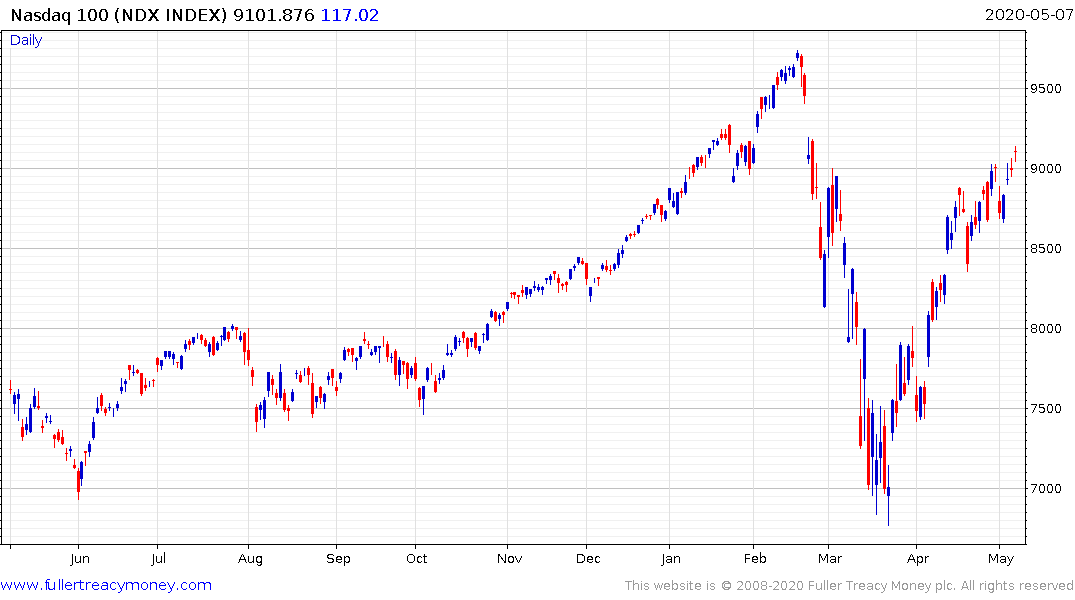 However, the Nasdaq Composite is now in positive territory for the year. That is pricing in no effect from the global recession and is completely reliant on valuation expansion fuelled by monetary and fiscal easing. This is not the first time this argument has been had. That last big occasion was in 2008 when many were expecting the second shoe to drop. This time fear of a second even bigger spike in infections is debilitating to sentiment.

However, the breakdown to new lows in early 2009 was not sustained and even through sentiment was apocalyptic prices began to recover. The stock market bound has faded in the last hour of trading for two consecutive days. That suggests institutional investors are using strength to lighten up. This rebound has been driven by retail investors but that is very late stage trading activity.

I remain of the view we are unlikely to see a bigger and worse 2nd wave in the autumn/winter. However, that does not mean the stock market has to rise in a straight line. We are due some consolidation of recent impressive gains and that may already be starting. How well instruments find support above their March lows following a setback will be the clearest arbiter of which sectors will continue to lead in a recovery.