James Grant 'Nobody Knows Anything'
Comment of the Day

James Grant 'Nobody Knows Anything' by Eoin Treacy

JG: Yes, yes. Patience is absolutely in order and also gold is … you know, I confess I’m a gold bug and I blurted it out — gold — before you even asked the question. Yes, but it’s not to the end of emulating Scrooge McDuck. That’s not the point.

The point is to have liquid wealth available when opportunity presents itself. Gold is many things but it’s not regenerative. And there’s nothing as an investment like a well-priced, successful, profitable well-financed business. So, what you want is gold for opportunities. You also want it, not so much as a hedge against monetary disorder because we have that, you want it as an investment in monetary disorder. That’s a second reason. So, I guess that’s a little bit of Scrooge McDuck reason but I hold it for those two reasons. I think that it’s going to be helpful for both.

I look forward to liquidating some of my gold bullion, as modest as that stack of coins is. I look forward to, at some point, liquidating that, if I have the nerve and the opportunity to accumulate something that is going to be yielding dividends and cash flow. But the other portion, well I think, I hope, I’ll never sell — that’s the bottom dollar: an investment in the evident tendency of monetary affairs. The arc of monetary evolution points to greater and greater interventions, more radical policy which begets still more radical policy, financial repression and more of that. We got more QE this week than they did under the Bernanke Fed.

So, to me the arc of this is very clear and you want gold, both for the inevitable spills in the market for financial assets as well as for the seemingly inevitable destruction, or certainly impairment, of the government-issued money. Those are my reasons.

Governments the world over are telling us this is not the time to worry about deficits. That begs the question, when is the best time? The Velocity of Money is cratering because of the shutting down of economic activity and the reduced number of transactions required to fulfil an online sale. That removes the inflationary bias from massive monetary and fiscal stimulus in the short term.

The more important point is these extraordinary policies will far out last the coronavirus crisis. The big question is how will the bond market react to the potential drawing down of these funds in future. The logical conclusion is the monetisation of public and private sector debts will be achieved through debasing the currency. That set of policies has a cumulative effect so it is less noticeable in the short-term but undeniable over the medium to long term. 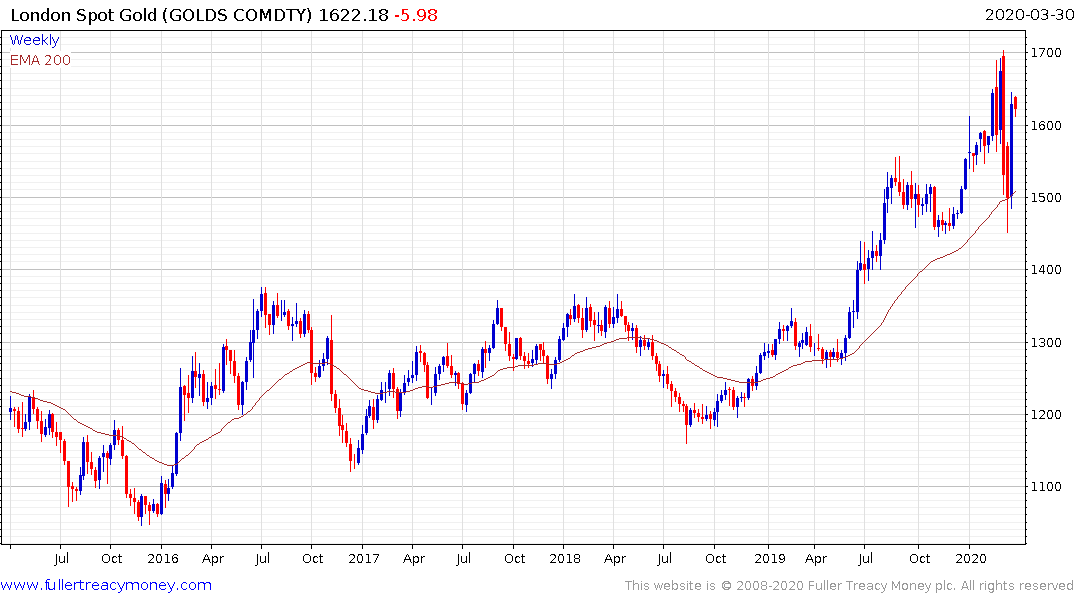 Gold rebounded impressively from the region of the 200-day MA last week and has paused below the early March peak. We may see some additional consolidation but as long as the price is holding the trend mean, potential for additional upside can be given the benefit of the doubt.

Russia has stopped buying gold. That decision is sure to have been influenced by oil price war and the effect that is having on the country’s finances. That frees up additional physical supply for the global market which may contribute to some consolidation.