“The minutes suggest that the bar to ease policy is clearly lower than to lift rates,” Colin Hamilton, an analyst at BMO Capital Markets, said in an emailed note Thursday. “In particular, they back up Powell’s recent comment that policymakers would not tolerate continued below-target inflation. This commentary was viewed as supportive gold.”

Spot gold advanced for a third straight day, rising as much as 0.7% to $1,623.73 an ounce. Holdings in global exchange-traded funds backed by bullion have risen to a fresh record, and are on course for a sixth weekly expansion, the longest streak since November.

“It looks like a self-fulfilling prophecy,” said ABN Amro Bank NV strategist Georgette Boele. As prices broke out, the move has attracted more investors into gold, she said.

Gold could reach $1,650 over the coming weeks, according to UBS Group AG’s Global Wealth Management unit. “With U.S. equity valuations elevated, any further upsets could see another bout of volatility, a further rally in government bonds and a higher gold price,” analysts Wayne Gordon and Giovanni Staunovo said in a note.

Investors are accustomed to the fiction of China’s economic statistics and therefore have little faith in the reliability of their reporting of the number of viral infections either. The one thing we can monitor with some accuracy is the success of containment efforts outside of China. So far these have been relatively successful in containing an exponential spread of the disease. The big question is how much of a toll is it taking on the Chinese economy and how much stimulus will be required to revitalise consumer demand. 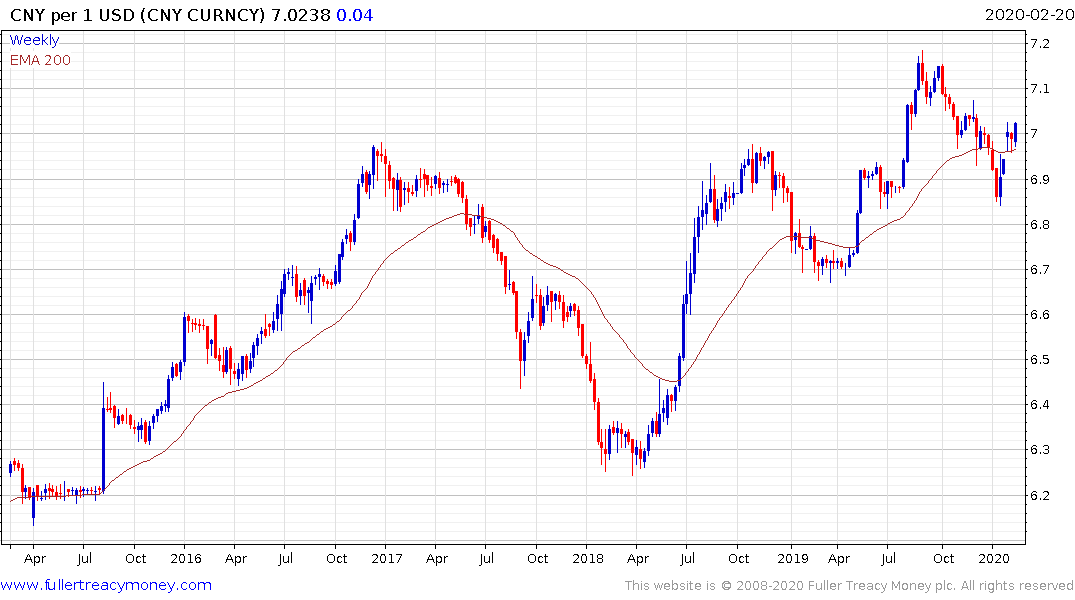 The Dollar posted an upside weekly key reversal against the Renminbi ahead of the Lunar New Year holiday and continues to follow through on the upside. A clear downward dynamic sustained for more than a few sessions will be required to question momentum beyond a pause. 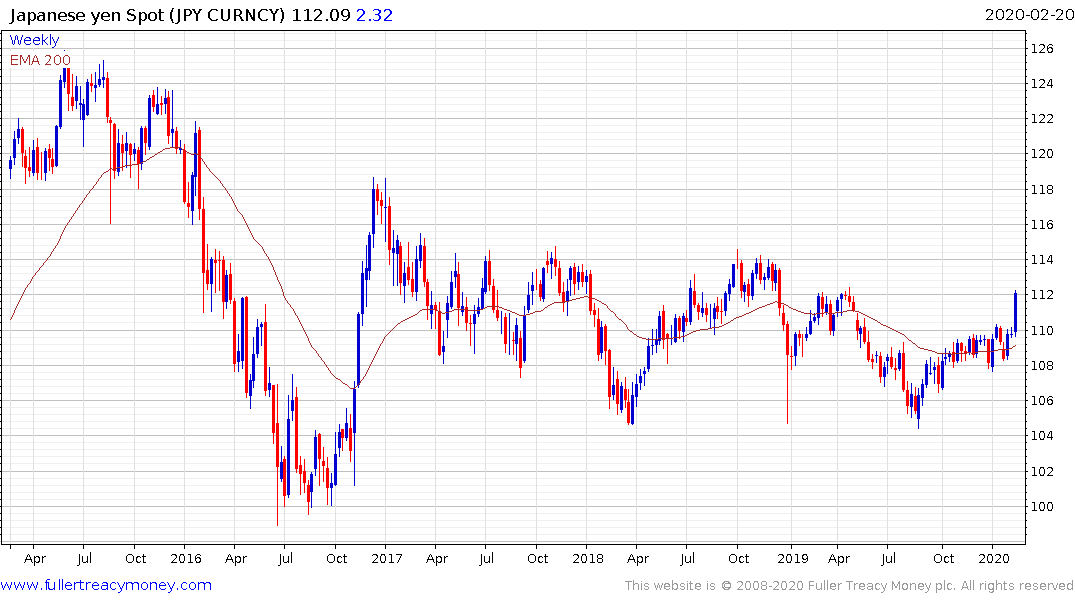 The simultaneous weakness of the Yen, as the Dollar breaks a multi-year downtrend against it, is additionally noteworthy. Japan is enduring the setback from its latest sales tax hike at exactly the wrong time. The country’s economy is heavily exposed to China and the duel challenges represent a significant headwind for the currency. 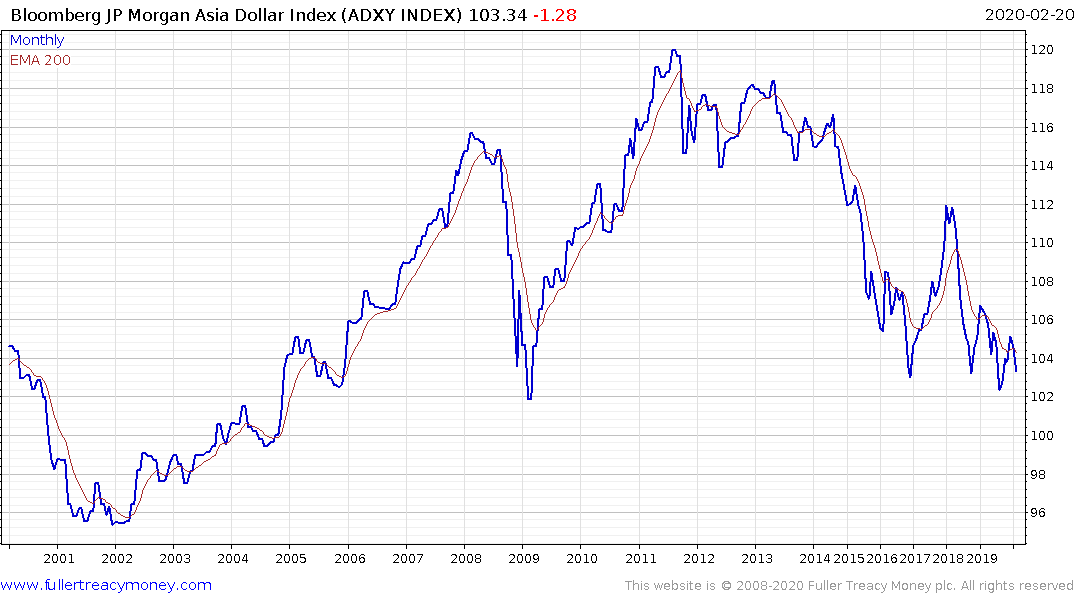 The weakness of the two most significant currencies in Asia is resulting in other countries scrambling to devalue quick enough to maintain competitiveness. The Asia Dollar Index has broken a short-term sequence of higher reaction lows and appears primed for additional weakness. 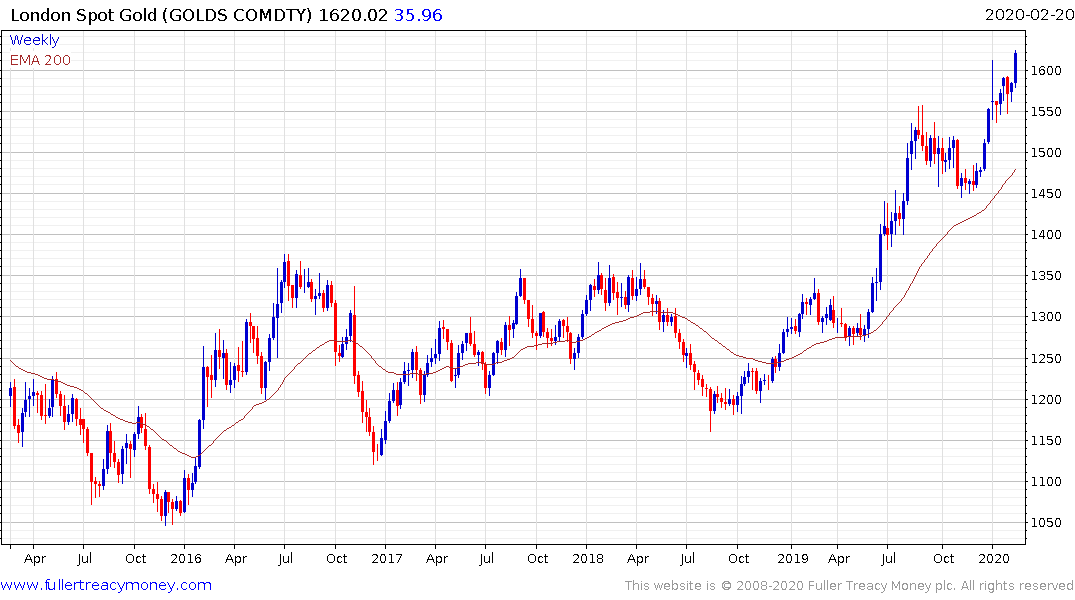 The trend of competitive currency devaluation, globally, represents a significant tailwind for gold because it is the barometer against which the purchasing power of other currencies is measured. Spot gold continues to extend its breakout and remains in a consistent medium-term uptrend. 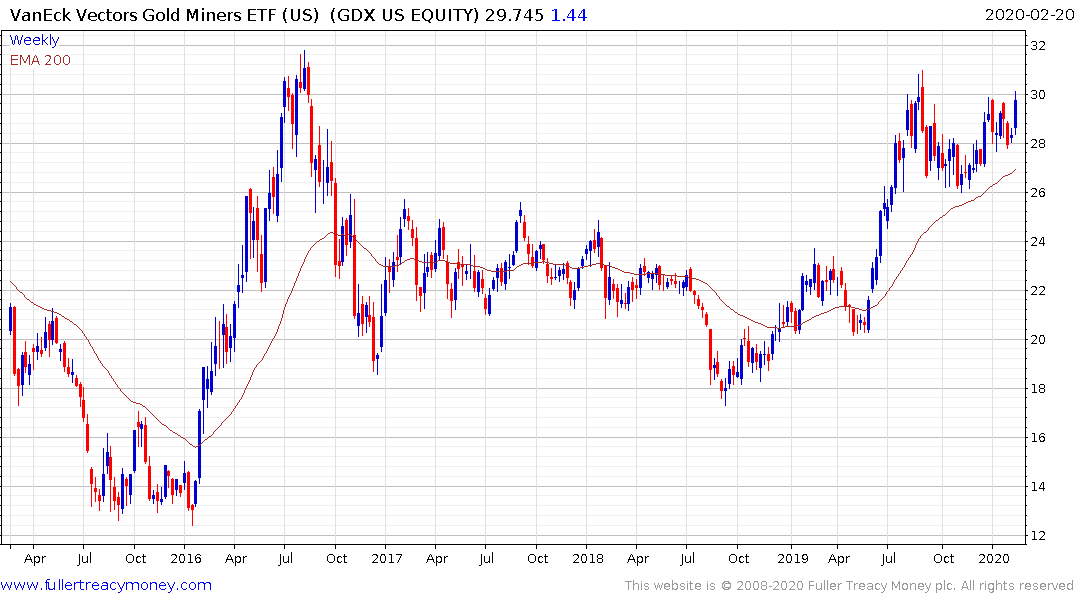 The VanEck Vectors Gold Miners ETF (GDX) ETF tested the psychological $30 area today but failed to breakout. Nevertheless, a breakout is more likely than not provided gold continues to advance. Gold miners are among a small number of sectors almost guaranteed to have earnings beats over coming quarters.