Excerpt from "Xi Jinping: The Backlash"
Comment of the Day

Excerpt from "Xi Jinping: The Backlash" by Eoin Treacy

To complicate matters, Americans are suffering buyer’s remorse with China. Washington, or at least much of its national security leadership, long believed that China would not buck the US-led global order because they were such beneficiaries of it, either through a liberal trade regime or, for example, through the constraints the United States forced on regional rivals in Asia such as Japan. “The United States has always had an outsize sense of its ability to determine China’s course,” wrote Kurt Campbell and Ely Ratner, who both moulded Asia policy in the Obama administration. “Again and again, its ambitions have come up short.”

Washington’s policy was based on a series of misjudgements, many of them quite reasonable at the time. Sandy Berger, Bill Clinton’s late national security adviser, for example, depicted China in a speech in June 1997, as being a divided country, “with conflicting forces pulling in opposite directions: inward-looking nationalism and outward-looking integration”. In truth, China’s integration with the world has always been tailored to reinforce the nationalist narrative at home. In the words of analyst Tanner Greer, the ‘let’s engage China to make it a responsible stakeholder’ policy was not as stupid as it is now portrayed. “What should have been an opening gambit became a stale dogma,” said Greer. “But it was a good strategy initially, one that terrified the Party leadership, so they took action to defeat it.”

The Americans overrated their intrinsic attractiveness and strength as a benign, inclusive, unassailable superpower, especially in the post-Cold War glow of victory against the Soviet Union, another rival communist state. More to the point, they underestimated the Party’s equal and opposite sense of its own exceptionalism. “We wanted to believe that we could convince China that they would be better off with us in charge, and that somehow, with more interaction and engagement, the Chinese would come to believe that, ‘I like to be told what to do by the United States’,” said Oriana Skylar Mastro, of Georgetown University. The United States also failed to understand, says Ms Mastro, that China felt compelled to build up its military. China’s leaders never “felt safe surrounded by the US military, and … at some point, if they could, they would reduce US military presence in their periphery”.

I don’t think voters had any conception of how the big bet on civilizing China was been collateralised. We know the decision was made to allow China into the WTO based on the assumption that if GDP per capita reached the magic $3500 level it would miraculously become a free and open society and a willing partner in the spread of rule of law and good governance. What is never discussed is this bet destroyed several million US jobs and at least an equal number in Europe, Canada and Australia.

Accession to the WTO accelerated the offshoring drive and manufacturing moved en masse to China. If we are looking for the root cause of stagnating wages, deflationary threats and the widening gap between rich and poor, it is to be found in the loss of millions of manufacturing jobs which had been the primary avenue for less educated people to achieve a middle-class standard of living. The service sector jobs that replaced them generally have lower wages.

In agonizing about the trade war and the disruption of the global supply chain, I believe it is worth remembering why we have seen a rise in populism. The simple fact that in democracies people vote for their own self interest when alternatives have been seen to fail cannot be ignored. The big question for pollsters is how well news of a trade deal would be greeted by swing voters.

Meanwhile China continues to support the global economy by running a massive fiscal deficit. This graphic from Nomura is instructive in that regard. 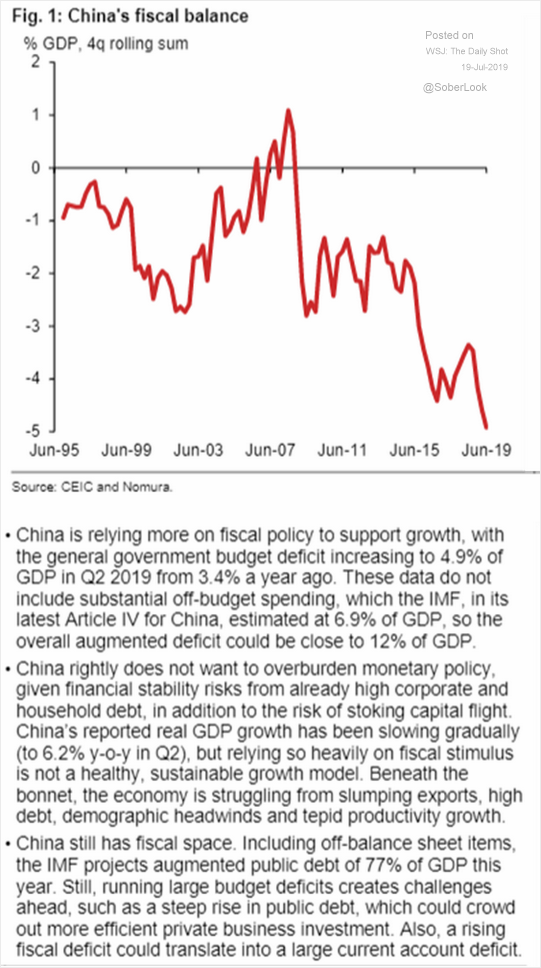 Together with lower interest rates in the USA and the potential for negative rates from Europe. There is potential we are currently at the trough in global growth which could support the stock market in its breakout. 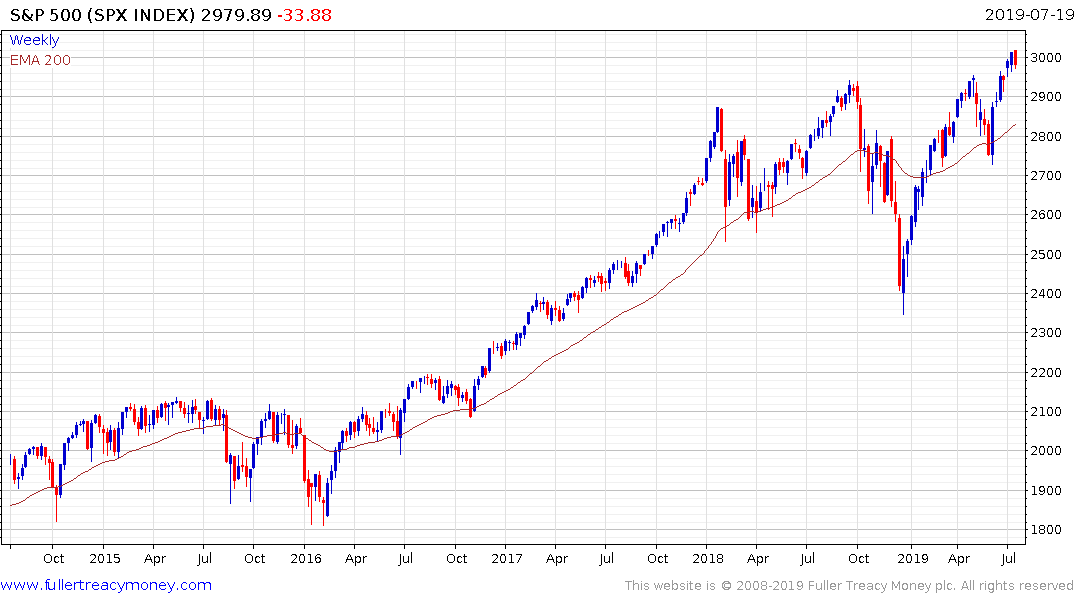