The second quarter will probably provide more evidence how damaging zero or negative rates are for an industry that at its core depends on clients paying to borrow money. Revenue at eight of Europe’s top lenders is set to decline 2.7% on average from a year earlier, according to filings and analyst estimates. That compares with a 0.5% gain for the top U.S. peers, many of which still managed to post record earnings after nine interest rate increases by the Federal Reserve since late 2015.

“The focus for European banks is really on revenue,” said Jonathan Tyce, an analyst at Bloomberg Intelligence. “Rates are set to go down, which means lower loan loss provisions, but that doesn’t make up for the loss in revenue. All this keeps bringing you back to costs.”

And here is a section on Deutsche Bank

Deutsche Bank (July 24) unveiled its biggest overhaul in decades this month, including a plan to exit its underperforming stock trading business. The move was partly driven by low interest rates and the company now assumes that European short-term rates will rise to just 0% in 2021. Deutsche Bank also offered insight into second-quarter earnings with a 5.9% slide in revenue. Costs and profit figures fell short of expectations, even before the bank said it expects 3 billion euros of restructuring charges in the period. Deutsche Bank says about 75% of the investment banking businesses it wants to keep will have a top five market position, and the release this week will

The basic business model of banks, borrowing short-term to lend long-term, doesn’t work if there is no spread. It is complicated by negative deposit rates which see banks pay a fee to sustain Tier 1 capital ratios. The most LTRO program was paltry in comparison to the previous one and therefore represented a tightening of credit conditions for European banks.  This week’s earnings announcements will give us some insight into how they are faring. 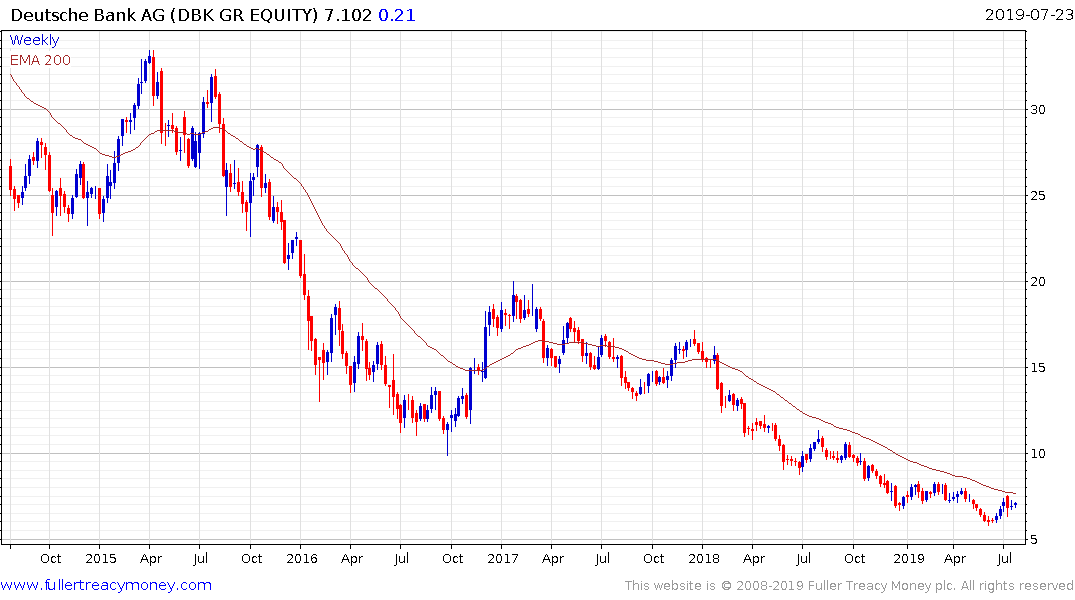 Deutsche Bank is reconstituting its business to concentrate on the momentum move in bonds. By exiting equities, which it was never very strong in, it is getting back to the basic business of providing fixed income products to corporate clients. That is going to require the creation of a bad bank to warehouse the sour derivatives contracts the bank has built up as well as the equities and private assets which are dragging on performance. The now defunct HNA Group is reportedly eager to sell its significant share in the bank and that throws focus onto how willing the German government or private investors will be willing to recapitalize the bank once it has divested of a significant quantity of its assets.

The CDS on subordinated debt which is arguably a measure of the banks riskiest bonds is reasonably steady at around 300 basis points. The most recent vintage for senior debt trades at 68 basis points. That does not suggest imminent risk of default. However, the share has a to sustain a move above the trend mean to break the downtrend. 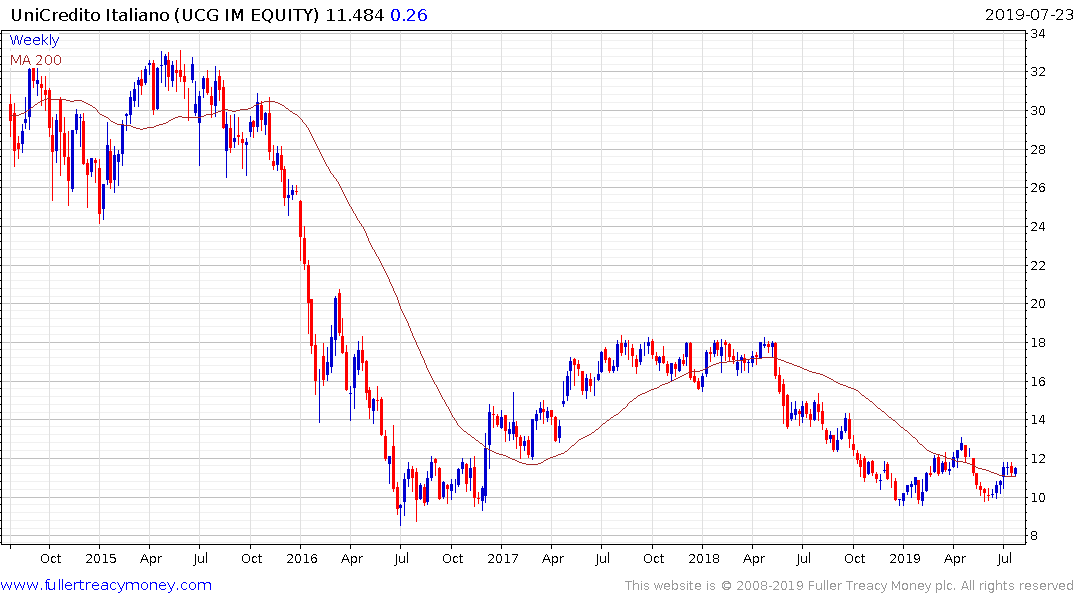 Elsewhere, Unicredit is firming from the region of its trend mean as it rebounds from its recent lows.

The macro background is not favourable for bank earnings in Europe so those that can contain costs most effectively are probably going to be the better performers.