Euro Strengthens After ECB Expands Bond-Buying
Comment of the Day

Expansion of the “very controversial” program suggests that the ECB is determined to stabilize peripheral spreads and is indifferent to court challenges, a change from ECB President Christine Lagarde’s posture in January, according to a message from Bipan Rai, North American head of foreign exchange strategy at CIBC

Investors are increasingly of the opinion that Europe is going to finally address some of its internal contradictions. The lengthy period of austerity imposed on peripheral nations killed growth, threatened deflation, sparked populist protest movements and endangered the sustainability of the Eurozone project. It is now over.

When I stated seventeen months ago that Germany was going to be willing to abandon fiscal discipline, I received a lot of push back from subscribers who described it as wishful thinking. However, the reality is that the Euro is the Deutsche Mark. Germany has to do whatever is necessary to ensure its success.

The fiscal strait jacket has been removed and the EU is going to try and spend its way out of trouble. The next step in the long road towards federalism is now being taken. That is helping to support the Euro. It rallied in a similar fashion in February but the failed break below $1.08 and subsequent rebound suggests this move may have legs. That’s beneficial for non-US Dollar assets just about everywhere because the Dollar is retreating against just about everything. 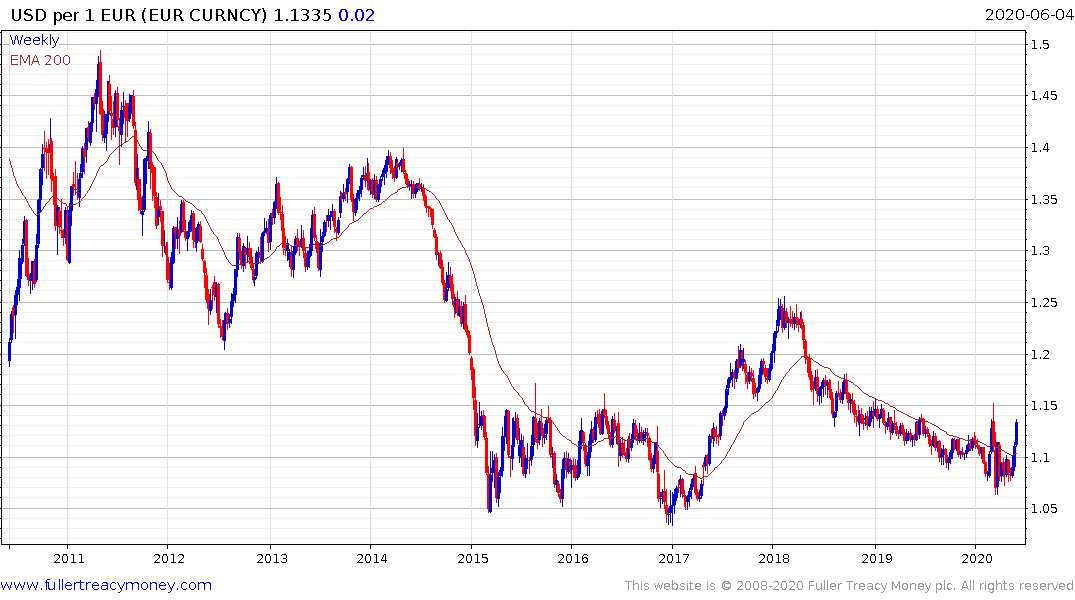 Dollar weakness is sapping demand for US Dollar assets. While some stocks benefit from a weaker Dollar because it flatters overseas earnings, it also poses inflationary challenges because import prices increase. Those twin challenges of a weaker currency and rising inflation represent particular challenges for the Treasury market. 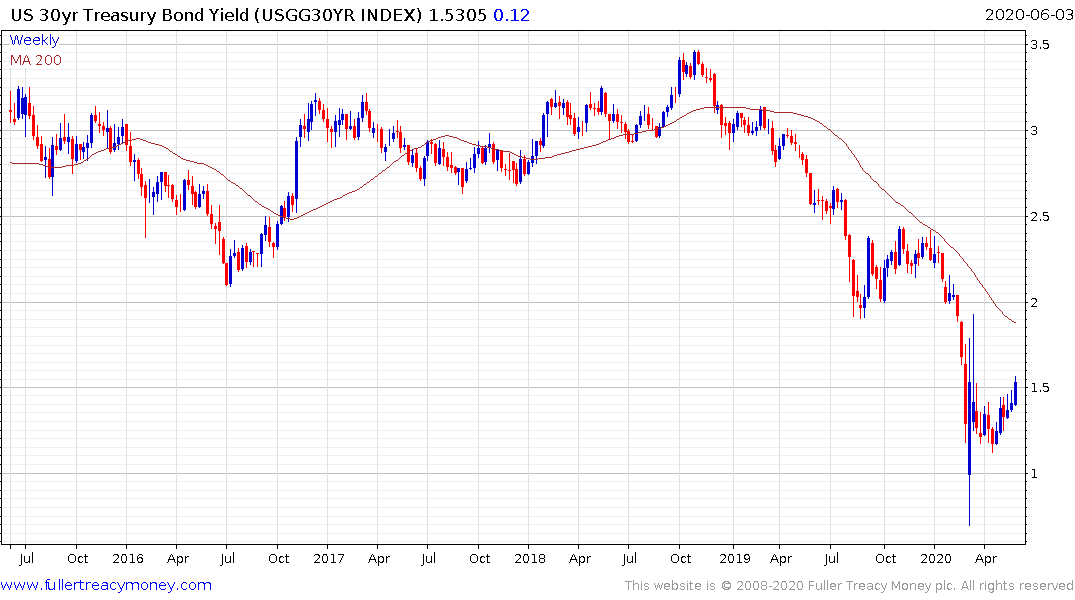 30-year yields broke successfully above 1.5% yesterday and extended the move today. A sustained move above 2% would break the 18-month downtrend and confirm a return to supply dominance.

With jobless numbers continuing to rise and popular protests against racism and inequality breaking out all over the USA, the end of lockdowns is an urgent requirement to try and get people back to work. Even then it will take time to restore consumer confidence. 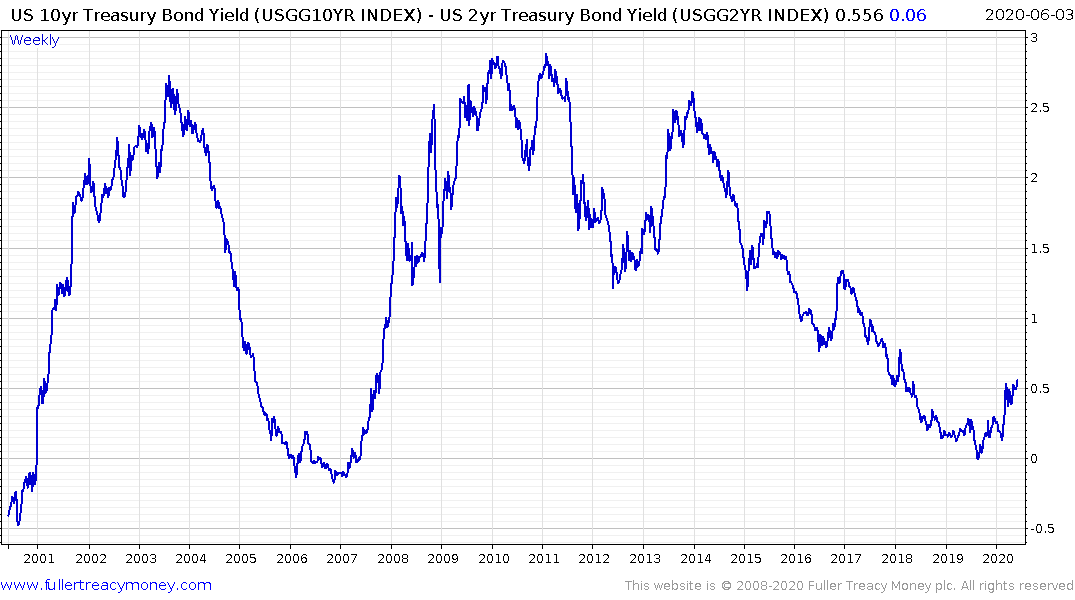 The yield curve spread jumped through 500 basis points today. That is generally consistent with stress in the economy that forces the central bank at act aggressively. It is also usually when the greatest pressure comes to bear on the stock market.

So far, the rebound on Wall street has been particularly impressively but with the Nasdaq-100 briefly hitting a new high today, legitimate questions are being asked about sustainable these gains are, against a background of severe recession. 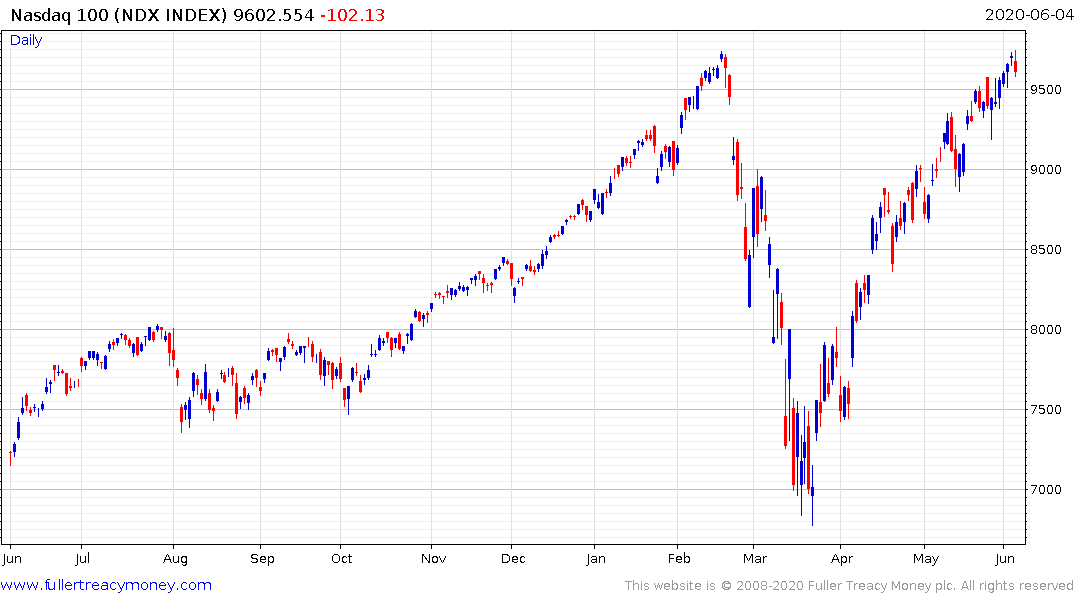 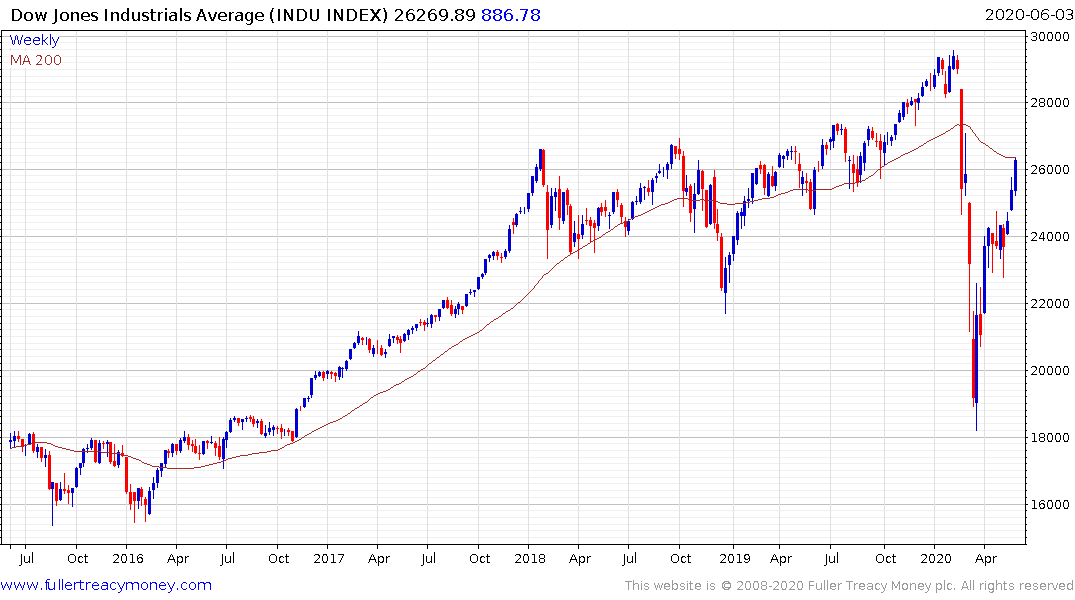 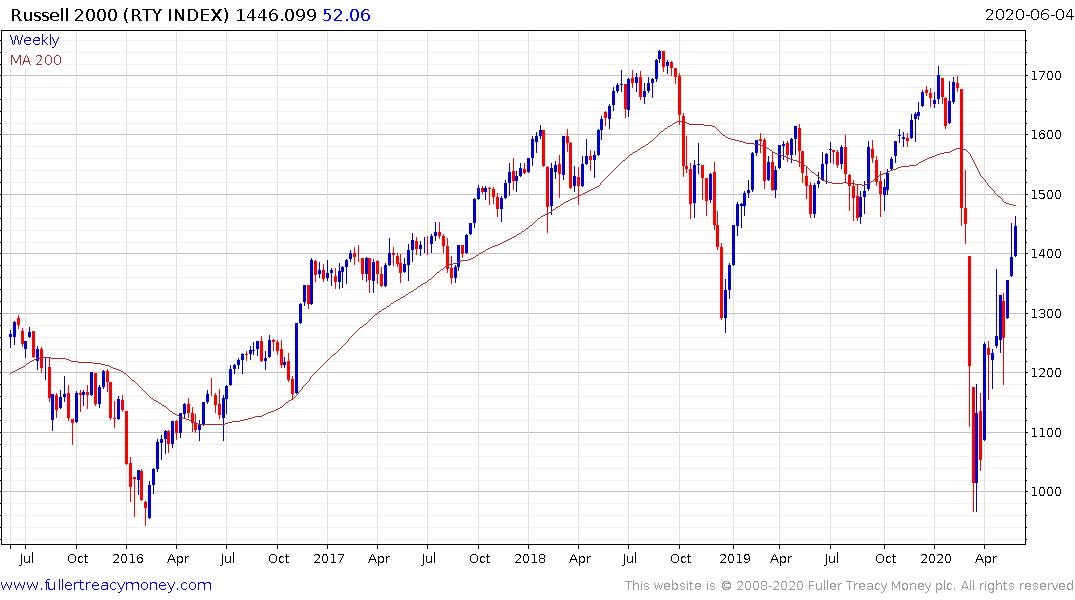 Both the Dow Jones Industrials and the Russell 2000 are testing potential resistance in the region of their respective trend means.

The continued swamping of financial markets with additional new rounds of liquidity, such as the $1 trillion in additional stimulus being discussed by the Trump administration will be the key requirement to continue to support asset prices.