Email of the day on what's next for UK markets:
Comment of the Day

Email of the day on what's next for UK markets: by Eoin Treacy

UK markets may rise after the election if the Corbyn treat goes away. But wouldn't there be significant differences between indices and companies?

If the pound rises it hurts profits earned overseas (when converted back into GBP), so the FTSE100 index and many of its companies may do less well than domestically focused companies. The FTSE 250 could out-perform. What's your view?

The Pound peaked well ahead of the Brexit referendum but it collapsed once the result was known. Ahead of the plebiscite $1.50 was an area of support, since 2016 it has represented resistance. The rate versus the Dollar at present is firming from the $1.30 area and has broken its almost two-year downtrend. 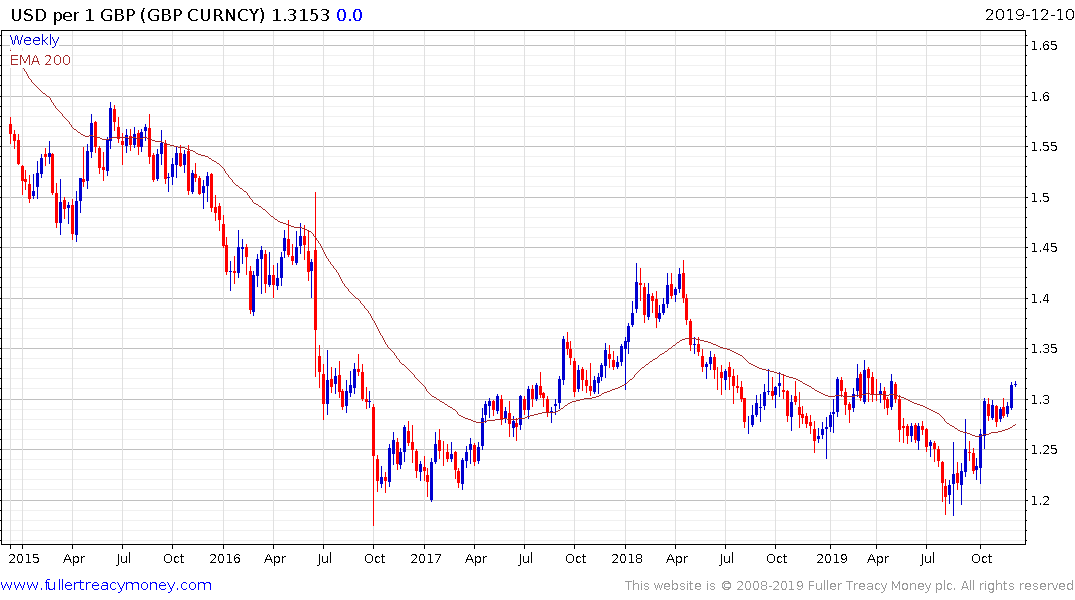 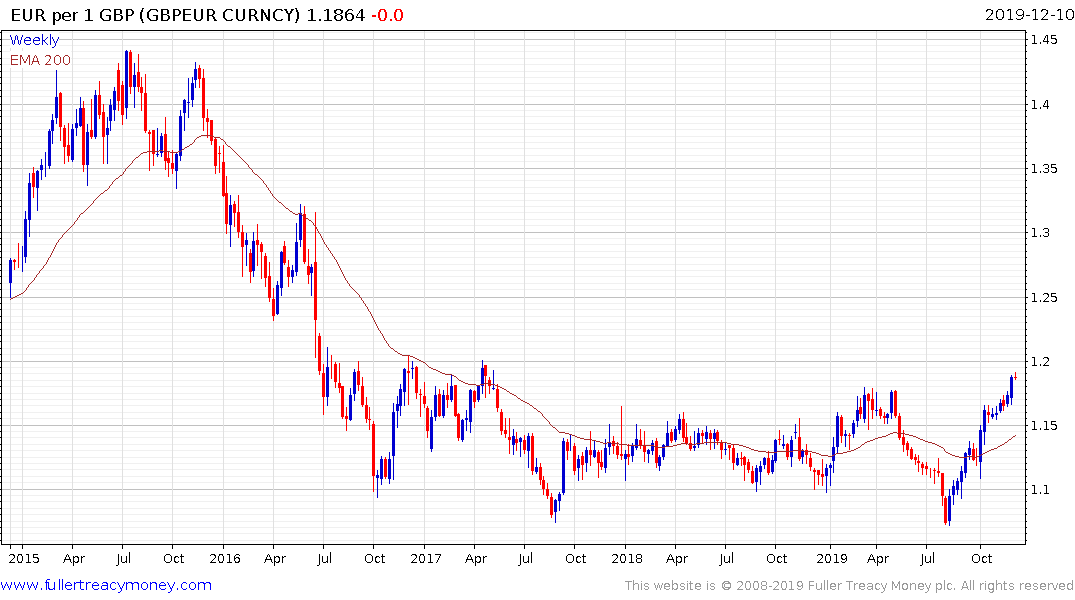 Against the Euro, the Pound is rapidly approaching the €1.20 area which has represented an area of resistance since 2016. The price has rebounded impressively from the failed downside break below €1.10 in August and now has a short-term overbought condition. That suggests at least some partial pricing in of the benefit from some additional clarity on the Brexit question. Some consolidation following a favourable election result appears likely which will probably be limited to a reversion towards the mean and unwinding of the overbought condition. If the election result is not favourable, it would be reasonable to conclude we see a deeper pullback.

I agree that the foreign earnings of FTSE-100 companies is a factor in their performance but the bigger influence is the growth of the global economy and the outlook for both energy and commodities which represent significant weightings. 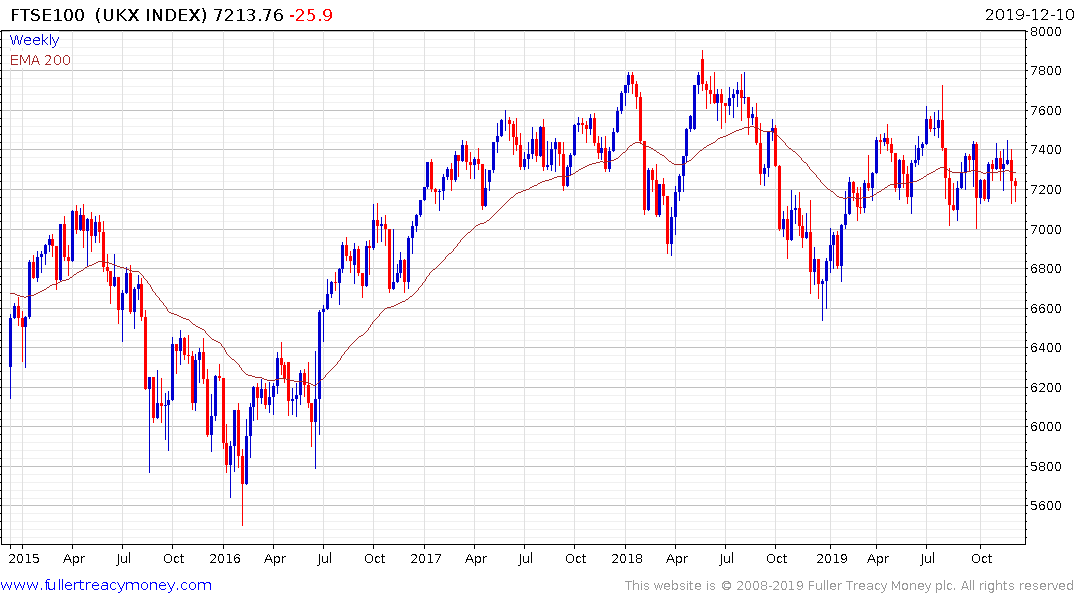 The Index has been rangebound for three years but this congestion area continues to look like a first step above the 16-year base.

The FTSE-250 Index is much more domestically focused and therefore benefits from improved competitiveness from a weaker currency but primarily from a strong domestic economy. The recent strength of the currency suggests the competitiveness factor will be less convincing but if the economy improves that will encourage foreign inward investment. The relative discount the UK is trading at will be particularly relevant on that front. The smaller size of the represented companies also gives them a favourable base effect in appreciating. 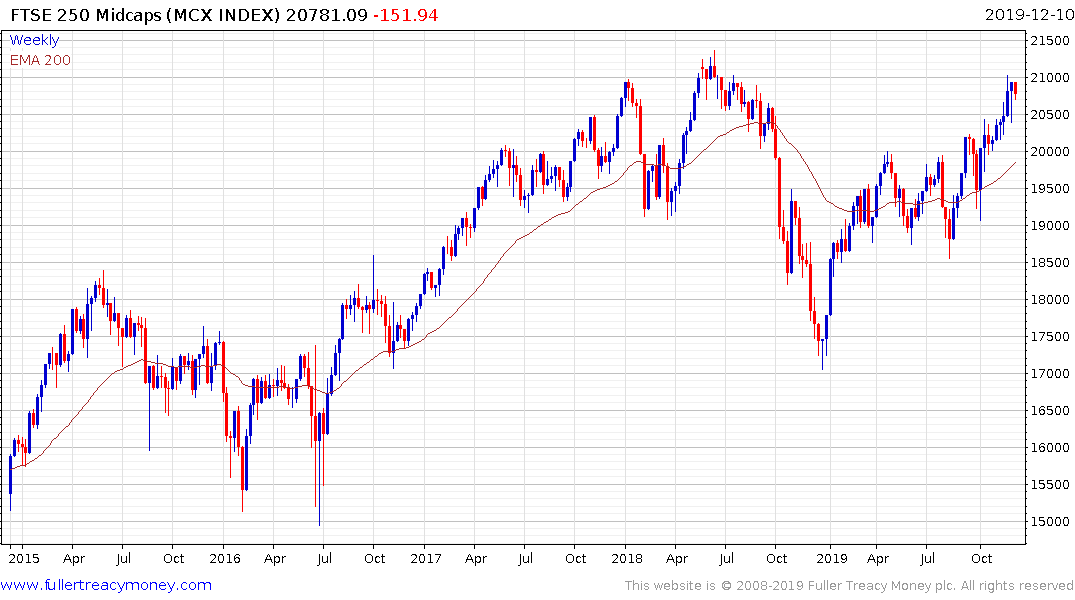 The Index has also been broadly rangebound since 2017 but is also in a more impressive decade long choppy uptrend. 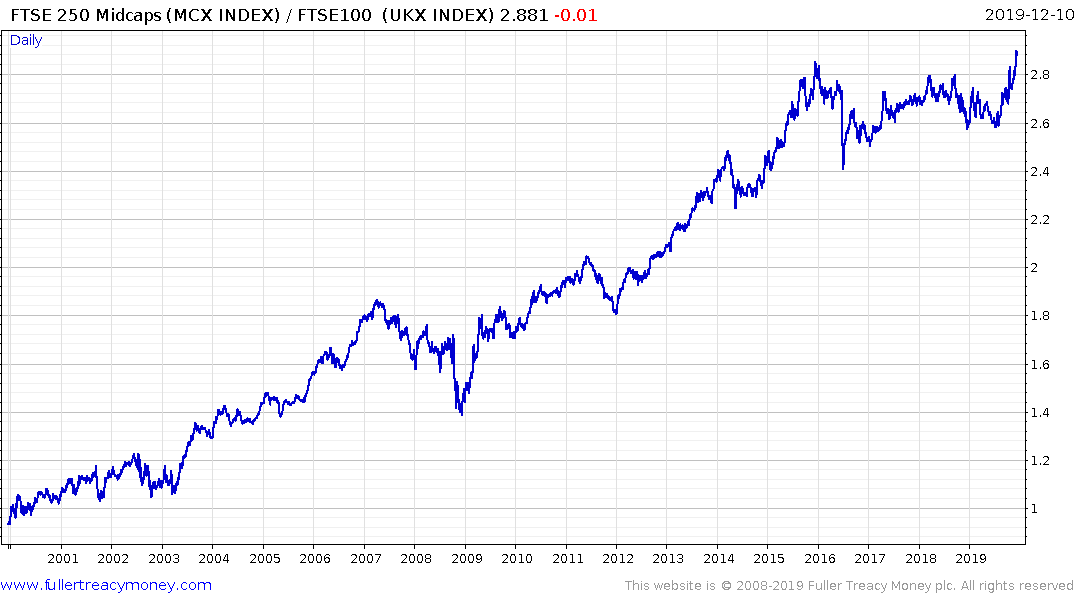 The ratio between the two highlights the fact that midcaps habitually outperform large caps. The two big periods of underperformance were between 2007 and 2010 and between 2015 and quite recently. Midcaps have just broken on the upside on a relative basis and it will need to hold if outperformance is to continue to be given the benefit of the doubt.