Email of the day on the trend mean:
Comment of the Day

Email of the day on the trend mean: by Eoin Treacy

Is 'trend mean' one static measurement tool like 200-day moving average or does it depend on the chart? I often see you use a 200-week moving average when referencing trend mean but often times it is another time frame. Can you clarify?

You have been spot on, on the direction of gold bullion. Well done. Have been enjoying the service.

Just one question, if you will: What is the rationale behind the ‘’trend mean’’ which you use on your weekly charts?

There have been a couple of questions relating to the use of a trend mean over the last week so I thought I had better clear up any misunderstanding. We use the 200-day MA as a trend mean because it is a handy average of the prevailing price over the last year.

Rather than think of the trend mean as offering a sacrosanct level of support and resistance we use it more as a way of eyeballing just how overextended a market is. It is reasonable to expect that even in a consistently trending environment there will be occasions when prices have risen a bit quicker than usual. That increases potential for a reversion back towards the mean.

Markets tend to overshoot in both directions so it is quite normal for prices to bob around the trend mean as they find support. That is why we talk about the price find support or encountering resistance in the region of the trend mean.

In the Chart Library we only use days in calculation so a 40-week average in some services will always be a 200-day MA in our service.

In some of the recent Big Picture Long-Term videos I have been using a 1000-day moving average to illustrate the long-term tendency of markets in secular bulls to bounce from this very long-term average. 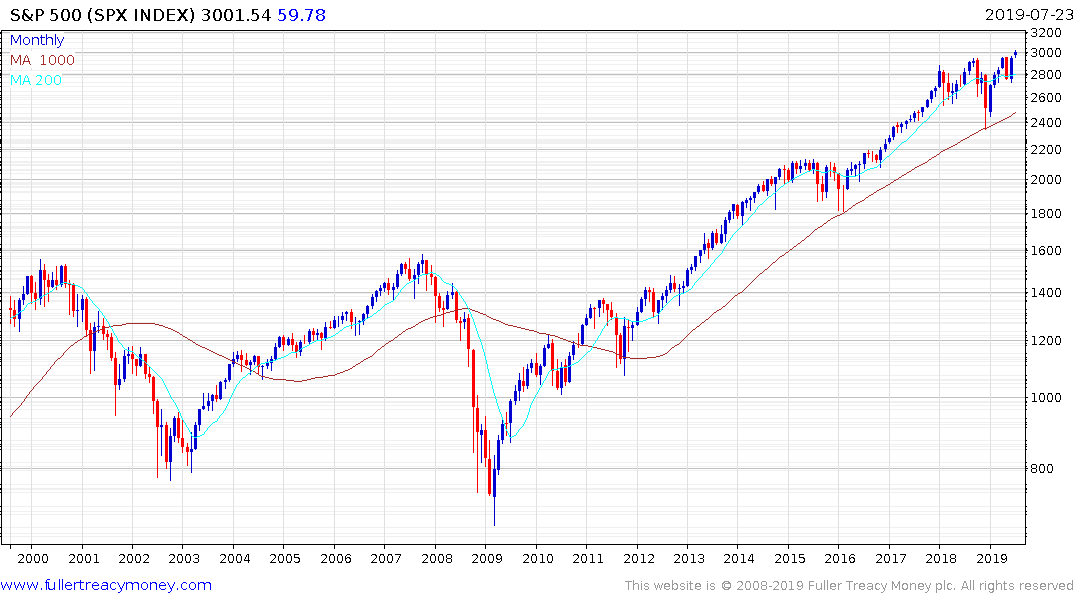 Therefore, using the two in tandem makes sense. When a wide overextension is evident versus the 200-day MA that increases the potential for a reversion towards the mean. One of the primary consistency characteristics on the 10-year trend on Wall Street is a sequence of 18-month ranges one above another with the nadir of each medium-term correction finding support in the region of the 1000-day MA.

As a trend smoothing device the moving average is a lot less useful when a market is in a prolonged range. With gold it was the rounding characteristic to the base formation and the period of righthand extension that followed the Type-2 bottom in 2016 that hinted at breakout potential.